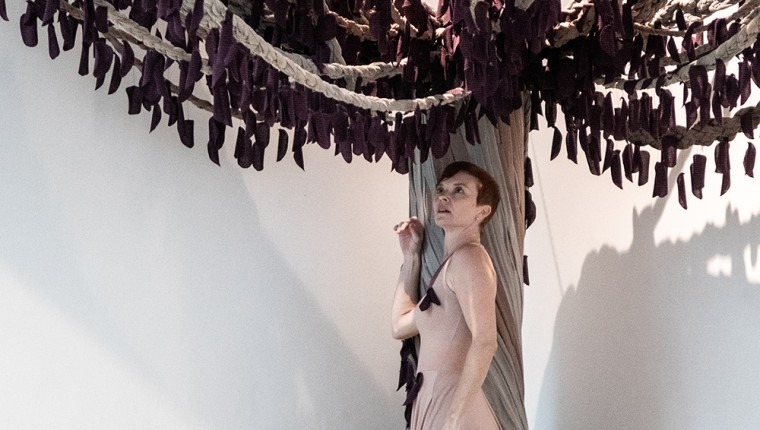 . . .
Helen Hansen French liquifies at the foot of Nebulous’ soft, luxurious clouds. Three women — French, Sharon McCaman and Kaylee Davis — rise meditatively, arms outstretched, until their legs kick up and swivel them around into another moment of stillness. Perfectly synced, they unspool themselves down to the ground.

They collectively reach but cut themselves short, their hands jaggedly slicing across their collarbones and shoulders, through and around. French says this part of the phrase is an interpretation of a Pat Catterson work she performed in NYC — one of her first debuts as a dancer in the city.
. . .

. . .
During an open rehearsal for Reprise: A Dance Performance in Five Acts, French, McCaman and Davis explore how to frame and echo Nebulous, McCaman’s visual sculpture which is divided along the wall in multiple parts. The performance premieres Thursday, March 10 and is a part of LOOK TOUCH MOVE, French and McCaman’s collaborative installation which opened at Creative Pinellas on February 1.

Reprise visits the past while embracing the future. All the physical movements choreographed by French are inspired by past works that she has performed over the last 20 years. She equates some movements to that of “old friends,” while others challenged her to grow as a performer.
. . .

. . .
In an exhibition full of reiterations that re-use and re-purpose McCaman’s sculptures and French’s choreography, both artists wanted to expand the definition of an art gallery. Over the past two months, The Gallery at Creative Pinellas has hosted an all-artist improv jam, a site-specific arts workshop, meetings with our local dance community and several open dance rehearsals for Reprise.

“The choice for open rehearsals came about because I really wanted people to engage with the exhibit and dance, in a more active way than you would expect to find when you visit a gallery or attend a traditional open rehearsal,” says French.

“I’ve had patrons stop and ask questions about what I am doing or ask about Sharon’s work. I think seeing a body move and engage with the art allows or encourages patrons to do the same, to take a different perspective to give themselves permission to explore.”
. . . . . .
In rehearsal, the three women exhale in another breathless fall. It’s almost as if they are struggling to untangle Nebulous’ folds. Laying down prone on the three-piece mat that doubles as a stage, a simple lift of the head moves their faces from one cheek to another. McCaman and French rise and disappear out the gallery archway, leaving Davis in an explosion of limbs – her bony, angular shapes providing contrast to the smooth grey universe that serves as her backdrop.

Davis is a dance BFA student at the University of South Florida. She attended the LOOK TOUCH MOVE improv jam on Feburary 5 and was instantly enamored with the playful atmosphere created by French and McCaman. During the jam, Davis danced with McCaman’s Pnuema, a floating tulle sculpture that feels like Tchaikovsky’s white swan suspended above a pool of blood-red carpet. During a water break, French asked Davis if she’d be interested in performing in Reprise. Davis agreed, energized by how moving amongst these sculptures completely transformed the space.
. . . . . .
“There were some magical moments of co-creation during the improv jam,” describes Davis. “I’m looking forward to dancing under Pneuma [for Reprise]. I hope the audience members may be able to connect more with the elements that Sharon’s artwork is based off of, or to create art themselves.”

Reprise: A Dance Performance in Five Acts will be sited around the gallery space. In repurposing choreography for these spaces, French chose to treat each of McCaman’s sculptures as their own little worlds. Each section will be performed in ten-minute increments. French’s hope is that the durational aspects of these dances will encourage attendees to wander amongst the artwork and catch glimpses of movement at their leisure.

The opening sequence at the entrance will take place in front of the LOOK TOUCH MOVE wall as a duet between French and McCaman. Dressed in formal attire, their dancing will begin and end with the ring of a bell that visitors can control on the front desk — a tongue-and-cheek interpretation of red light, green light. Next is Celestial Menagerie, moving under Nebulous and featuring the trio, Davis, French and McCaman.
. . . . . .
Gethsemane at The Tree will share a solo exploration by French that amalgamates a dance she created for 11 bodies into her singular one. The rubber sand at the base of The Tree originated on the set of French’s first site-specific piece that she created when she moved back to Florida — another kind of amalgamation.

“This creative process has unfolded in ways I could never have predicted,” says French. “I pinpointed specific works, or moments from past works that I wanted to explore and then assigned them to one of Sharon’s works mostly based on whether or not the themes or moods between my work and Sharon’s aligned…

“It became clear to me early on that this is not a one woman show. I felt that some sites really called for more bodies, so I decided to ask dancers who attended workshops or open rehearsals related to the exhibit to join me.”
. . . . . .
A quartet called Wayfaring showcases the organic nature of French’s casting process. Taking place under Pnuema, the energetic improvisational score will include Sarah Emery — a dancer recently moved to Florida from Atlanta who happened upon an open rehearsal — Davis, French and McCaman.

Reprise’s final act ends as it began with French and McCaman in skim slip sweep slide swash at Swash. Unraveling Swash’s carefully woven knitting, the piece creates a new collage out of bodies and fabric. French says she was burnt out on making, prior to this residency, and her nostalgia for certain movements became the threads for her own kinetic sculpture — weaving together old repertoire and assembling them into new phrases.
. . . . . .
At the end of rehearsal, each woman’s static tableaus with Nebulous are shuffled around as they replace and reiterate one another. The same shapes, different bodies. They fall and the movement begins again. As McCaman re-enters the space, French waves her on. They are still figuring out the timing for the next section. The under-stitching is showing with decision-making happening in real time.

Another infinitesimal nod of French’s head means it’s time to start the rolling sequence. They leave and replace one another until the music ends. They exhale, making notes about timing and giggling.

The formality of performativity is broken, and they are no longer untouchable works of art, but very tangible, huggable, humans.

Find out more about this free performance here