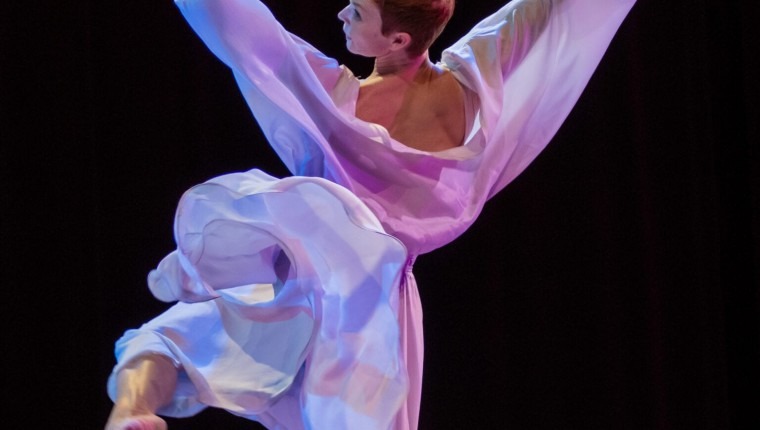 A human body engaged in dance is more than movement in the moment. Helen Hansen French calls it our internal weather, an atmosphere in swirl – not with wind, but emotions.

“My goal is to bring people together through dance,’’ says the St. Petersburg dancer, choreographer, teacher and arts activist. “It’s important that people see dance as a vibrant art in our culture.’’

French has taken more than a few steps in furthering her cause. In a big leap of support, she was recently named Artist Laureate by Creative Pinellas, the first such accolade given to a performing artist by the publisher of what you’re now reading, the Arts Coast Journal. In her laureate position, she’s developing a comprehensive program of arts activities centered around dance, as well as acting as a bridge between local artists and Creative Pinellas.

“I’ll be working closely with Creative Pinellas to drive forward its mission,’’ says the mother of two young boys. “My goal is to bring people together, to show them that dance is here in our area. I want to see dance in our community on weekly basis. I want dance to be so out there that when it’s not, you miss it. It’s about creating that level of expectation.’’

French is working on a dance residency program from September 9 through October 17 at the 10,000-square-foot Gallery at Creative Pinellas, located at the Pinewood Cultural Park off Walsingham Road in Largo. The open studio environment will bring dancers together to rehearse, collaborate and create choreography – and the audience will be encouraged to interact and respond with performers. It’s all about connecting bodies and minds, she says.

“I want to fill the space with dance, with movement accessible to everybody in the room,’’ she adds.
. . .

. . .
While making dance more prominent in the Bay area has always been her passion, this desire is especially important after COVID shelved artistic projects and performances everywhere. Dance was particularly hard hit, and the 42-year-old hopes her association with Creative Pinellas throws light on what is often considered an underappreciated artform.

“By having dance strongly represented here, hopefully theatergoers and lay people will see dance as a vibrant art,’’ she says. “And they will see there’s a community for them to belong to.’’

French is intensely focused on the art she loves, which may reflect her extensive training. After studying at Judith Lee Johnson’s Studio of Dance and Pinellas County Center for the Arts at Gibbs High School (with Ms. P, who now runs St. Pete’s Academy of Ballet Arts), she earned a degree in dance from the prestigious Juilliard School in New York, where she worked with the Buglisi Dance Theatre, Nilas Martins’ Dance Company and the Guggenheim Works & Process program.

She’s been involved with the Jacob’s Pillow, Chautauqua, Vail, Rishon LeZion and Oriente Occidente dance festivals, and worked with the prestigious Alvin Ailey American Dance Theater to bring Jacqulyn Buglisi’s Suspended Women to life. After a whirlwind international career, French returned to her hometown of St. Petersburg in 2013 to raise a family with her husband, Jonathan, a meteorologist by training who now works at the Florida Fish and Wildlife Conservation Commission.

Watching French dance does something to our concepts of place, space and time. Her presence is palpable in the 2014 dance film by Karen Reedy, Les Falaises (“The Cliffs’’), an expressive tour de force about a lone woman trapped in the room of an old house, while imagining herself as another person liberated beyond its walls. Her style of contraction and release echoes the iconic choreography of the modern dance pioneer, Martha Graham.
. . .

. . .
French brought a unique richness to the filmmaking process, says Reedy, director of the School of Dance at George Mason University in Virginia.
. . .

. . .
“Helen is a compelling artist who dives deeply into her work,’’ she says. “She’s a brilliant technician and is meticulous with her attention to the details in every movement, especially the most subtle. I chose to work with Helen as the dancer for Les Falaises because of her unique ability to fully embody the two opposing female characters in the work, bringing them to life.’’

French describes her body as containing the mappings of many styles of movement, and this allows her thoughts to become a physical shape in relation to space, time and other bodies in motion. “How does my body relate to other bodies?’’ she has said. “How do musical vibrations influence my cells, my movements, my internal weather?’’

Her style is well known to local dance fans through BEACON, the critically acclaimed platform for contemporary dance and collaboration co-founded by French and Lauren Slone. BEACON makes its home at the Palladium Theater in St. Petersburg.
. . .

. . .
Many people who have been to a BEACON performance might view dance as a fluid flow of movement, graceful and defying gravity. After decades of professional experience, French admits that all that gracefulness comes with a price.

“I’ve torn both ACLs and had a concussion in rehearsal,’’ she says. “The injuries of a dancer look like those of an athlete because our stamina matches that of Olympic-level athletes. Of course, there’s a flip side in that everybody can dance, not just the young bodies. We need to emphasize that all bodies, young and old and everything in between, can dance.’’
. . .

You can follow Helen French’s updates on her work during her
Artist Laureate year at creativepinellas.org/helen-hansen-french