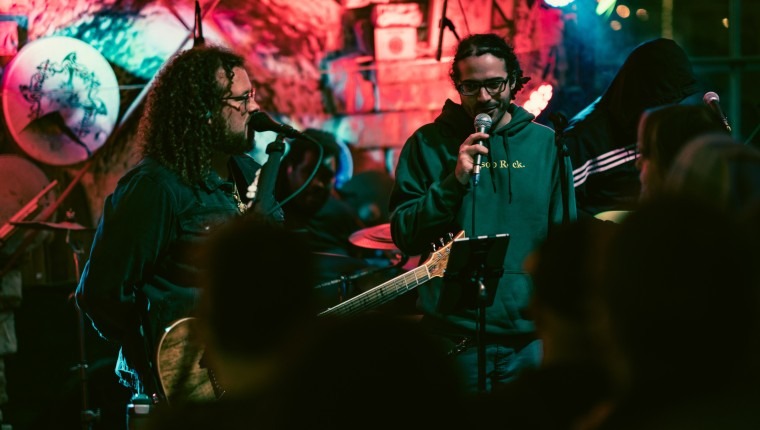 This is something that all-too-often gets overlooked, both from the musician and audience perspectives: The Bandleader. This is the guy (or gal), who isn’t necessarily the frontman, but keeps everyone in line, and goes above and beyond for the betterment of the bigger picture. Musicianship aside, I’d say that most every band/musical ensemble has one, but there are certain (perhaps most) scenarios where I feel like those individuals don’t get the respect they deserve (at least in the public eye). This is an opportunity for me to shine some light/glory in their direction—three people, specifically, whose owning this role has made a substantial impact on me over the years.

• Evan Brenner (of Variety Workshop) – While this band is no longer active, I can say for absolute certain, that this group wouldn’t have accomplished all that they did without the help of this man. Evan shared the role of vocalist/frontman with the mutual homie, Robbie Rob, but played a much larger part in the background. This was the guy that helped to mollify band drama between the members, e-mailed everyone and their mom to land new performance opportunities, and put up a large sum of his own, hard-earned money, to see VW’s Studio Album through to completion. Without Evan, this band would have likely not left as large of an impression on the Tampa Bay Area. Variety Workshop was the first band with which I ever sat in. They were the ones who really gave me my first platform to rap in a live environment… all the way up to me sharing the stage with them, opening up for Sublime With Rome at Sunfest in 2011. Hopefully, there will eventually be a reunion show…

• Kenny Harvey (of Holey Miss Moley) – First of all, Holey Miss Moley was a BEAST of a band. We’re talking a minimum of like 10 Members, plus a number of guest musicians tangentially involved in the project (including yours truly). Who was the guy who always ran the f*cking show and made sure we were all on point? Bassman, Kenny Harvey. There were A LOT of moving parts, and he was religiously the one to make sense of it all, send visual/audible cues to the various performers, and make sure the project succeeded. I had some amazing times performing with the group, both at Suwannee Hulaween AND at The Green Parrot in Key West, FL. I was always in awe, astonished by how he could possibly manage all of us. It was feat to say the least, and he will forever have my utmost respect.

• Justino Lee Walker (of Anthill Cinema) – I’ll start by saying that this blog entry was inspired by my observing and empathizing with this gentlemen at yesterday’s showcase. Justino is a workaholic in his own right, but also will sacrifice most everything for accomplishing creative endeavors to Nth degree. HE rents out a studio to ensure he has a space for his band to rehearse. HE sacrifices his own pay to make sure other band members get paid first. HE initiates the group chats. HE, honestly facilitates so much behind-the-scenes sh*t with the various incarnations of his band. Yesterday was a doozy. Sunday, March 6th was one of the rare opportunities he was able to wrangle most all of the vocalists involved in our collaborative album, The Table, Vol. 1, to perform and record it live at the Gasparilla Festival of the Arts. This dude spearheaded all of the group chats (and fighting over date availability), arranged for a full-blown rehearsal, and calibrated the band’s recording rig for hours and hours… only for us to be baking in the sun for a set choc-full of technical difficulties. Don’t get me wrong, the performance went fine, but the gear 100% absolutely did not record correctly. And so, all of his efforts, for this particular gig, were, in part, wasted. But just like all of the other musical hardships he’s endured, Justino was mildly pissed, but already messaging later that night to secure a follow-up date for us to do it all over again. He’s relentless and he’s amazing. I genuinely don’t know how he juggles all that he does and manages to keep us all in check.

My sincerest gratitude to all these individuals. Bandleaders are a rare breed that deserve respect for their efforts. While I’m sure I, myself, have played that role in certain regards, I can’t help but admire those who have helped and involved me in their projects. Thank you.