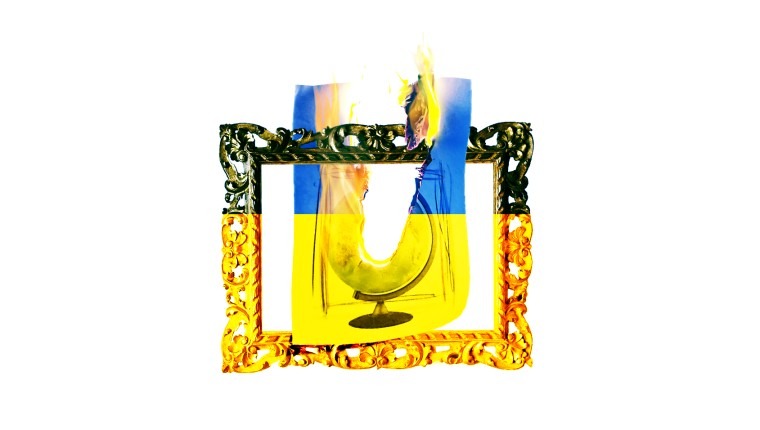 I am having a particularly hard time writing this blog. The events of the world that have unfolded in the past week have knocked me off my stool; it is very hard to think about the semiotic implications of juxtaposing bits of ephemera on a canvas when a country and its people have come under savage attack in the time since my last post. My rules of composition, asymmetry and negative space seem pretty insignificant against the backdrop of the loss of the rule of law, human decency, lives, homes, livelihoods, and futures. Talking about my drama of having to drive around all of Hillsborough and Pinellas counties looking for a particular canvas seems absurd in light of the true drama unfolding 5,673 miles away from where I sit typing in air conditioning, sipping coffee and writing to you, dear reader.

For years teaching Art + Design history, I was very interested in the birth and evolution of the Dada movement and connecting the dots from that historical fulcrum to subsequent developments in Western 20th century Art. Dadaism was born from the horror and devastation following the first World War. No longer was war a heroic exploit; the first mechanized war brought a shattered reality to the world that was to that point unknown. Soldiers – people — were left devastated. Artists questioned, in light of a world gone mad and the loss of reason, how art could be reasonable? In light of the loss of more than 15.5 million people, who needs another pastoral picture of a cow?

From Dadaism you can follow trajectories, directly and tangentially, to the major art movements of the 20th century and those lines continue to inform artistic inquiry today. If you are an Art/History nerd, I encourage you to read up on Dadaism and its contribution and influence on Modern Art and Design. But this blog is about me so let me bring this train back around….

The series of paintings that I have been working on for the Creative Pinellas Emerging Artists Grantees’ show that opens April 14th at the Creative Pinellas Gallery, have included ephemera of war toys marketed to kids through comic books. You can tell an awful lot about the world and its thinking by looking at old comic book ads. The timing has been gobsmack-inducing. Revisiting these old ads came from a conversation with my Creative Pinellas mentor, Dennis Gaston, and his suggestion that I look more inward and personal with the elements and themes that I was exploring. When I grew up, toys for boys were largely based around war and conflict; from playing cowboys with cap guns to GI Joe to watching John Wayne movies on Saturday afternoons, we were raised with the idea of war being heroic and even aspirational. Is there a relationship between the products and marketing directed at kids/boys and America’s stance following the Second World War through the Cold War? I can’t say authoritatively, but it  sounds like an excellent thesis project for some grad student to take on; let me know how that goes.

Until next time, be nice and support the arts.