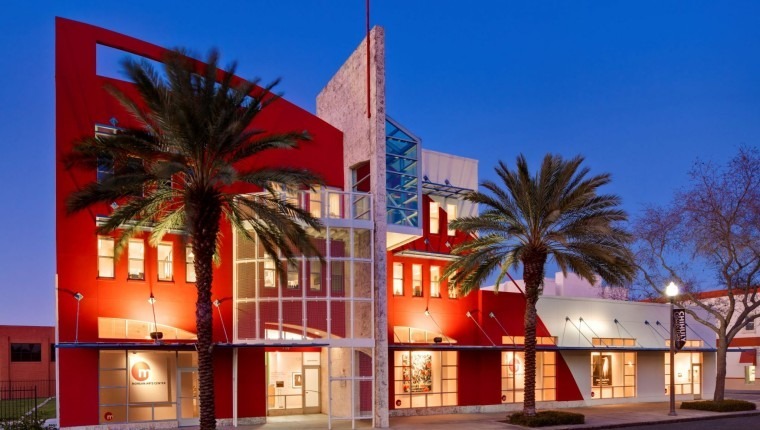 The Morean Arts Center
Florida’s First Center for the Arts

. . .
The origins of integral parts of our lives aren’t always traceable but the St. Pete art scene has a story, and with every story, there is always a beginning.

Imagine a St. Petersburg with no art, no artists. Imagine bare buildings without murals. Imagine schools without art or music education. Thankfully, whatever dull scenes the mind might conjure are not the St. Petersburg we are experiencing today because, in 1916 J. Liberty Tadd and his wife Margaret planted an idea that over the next 100 years, would gradually cultivate a community of artists and a widespread appreciation toward learning. Their legacy is the Morean Arts Center.

Tadd graduated from the Pennsylvania Academy of Fine Arts. He became well known in the United States and England for his ideas on new methods of art training, such as drawing with the non-dominant hand, drawing with eyes closed, and drawing with both hands at once. He authored a book on these methods, which gained wide acclaim and went through a number of printings.

The Tadds strongly believed in the importance of art and art education and their lives encompassed their passion and determination. J. Liberty Tadd died in 1917, but his wife and their daughter, Edith Tadd Little took over the implementation of his ideas on ways to teach art. They also continued to encourage an artful community – they formed the Art Club of St. Petersburg.

. . .
The club’s first exhibit was held at a storefront on 3rd Street in 1921, displaying landscape paintings by nationally known artist George Inness Jr. who saw the importance of what the Art Club was doing and the far-reaching impact their endeavor would have. According to Morean Arts Center: Celebrating 100 years of Art & Community by Clint Page, Inness called the show “the most notable event in the artistic life of Florida” and went on to say that “every community must have art atmosphere, else it isn’t worth existing.”

They started with 28 members and grew to 200 within a few years. The Art Club often hosted well-known local and national artists such as Fred Sass; portrait painter Walter Collins; New York portrait painter J. George Stacey; Janet King; Mark Dixon Dodd; Elsa Anshutz Zieg; Charles J. Belden (whose photographs captured life in St. Petersburg on postcards), and many, many more. Artists, including writers, dancers and singers, in the Tampa Bay area from the 1920s through the 1940s were likely involved in the club in some way.

. . .
While adults enjoyed classes, lectures, and exhibits, there wasn’t any type of art education for local children, at least not until prior to the Art Club’s decision to permit public grammar and high school children to view exhibits and lectures for free. This act would be the prelude to St. Petersburg’s inaugural decision to create an art department in the public school system.

Along with the rest of the country, the Florida Winter Art School and the Art Club of St. Petersburg lost much of their funding with the arrival of the Great Depression. Membership dues were cut but even so, fewer artists became involved. The club found creative ways to continue and perhaps the most popular and best fundraisers were the annual gala balls. The first was in 1929 and with each passing year, they grew more glamorous until the final event in 1936. Still, there was a collective interest in keeping the arts alive and accessible to all, even during these difficult times. Other arts organizations formed, even during the Depression, thanks to the Federal Art Project, which employed artists to teach, paint murals and create public art.

The art movement rapidly expanded in the 1960s and the Art Club’s traditional tastes in art and its creators didn’t neatly fit every artist. John Stanley, a gallery owner and artist known as a “modernist,” took on a leadership role in representing non-traditional creators like himself. In 1971, after several years of inactivity, new excitement for the Arts Center emerged as Stanley, many of his students, and Arts Center Association members, showed up to remodel an 1888 building at 1st Avenue South and 7th Street in downtown St. Pete.

. . .
The building needed extensive care and renovation. They refurbished most of the indoor spaces but the exterior would have to wait. Within a year the Arts Center Association offered a meeting place, studio space, classrooms and exhibit areas.

For 20 years, the Art Center’s 7th Street location continued to foster St. Petersburg’s arts community. One of its first projects was organizing a mural contest, which introduced the first of St. Petersburg’s murals, painted on their own building in 1972.

That same year, a massive storm destroyed the building’s exterior. While insurance covered many of the repairs, funds were at a minimum. But then, something wonderful happened – the Arts Center Association and the Art Club of St. Petersburg combined into one powerful force for the arts, 55 years after the Tadd’s initial conception. . . .
The Morean Arts Center’s current Central Avenue location is a testament to the significance of the arts in the Tampa Bay Area. As bright windows invite onlookers inside, the red façade offers an inspiring message – important, wonderful things are happening here.

Wonderful things began there in the last decade of the 20th century when the Arts Center purchased the former Lester Brothers Furniture store. Despite what must have felt like an astronomical cost to the organization, the sprawling mishmash of rodent and bug-ridden buildings in the 700 block of Central Avenue ached for change.

The Arts Center experienced many hardships over the years, several times even coming within inches of closing, but with many sacrifices and a lot of determination, the board continued to hold onto hope.

A Clay Artist to the Rescue

. . .
An Arts Center board member who was also one of three partners who started the St. Petersburg Clay Company, knew a potter by the name of Beth Morean. Morean wanted to support St. Petersburg’s art. She became an enthusiastic supporter of the Arts Center’s mission (her gift of the historic Seaboard Train Station is now home to the Morean Center for Clay) – and because of her financial contributions, the 700 block of Central Avenue is now thriving in creativity.

. . .
The Morean Arts Center is a recipient of the Pinellas Recovers Grant, provided by Creative Pinellas through a grant from the National Endowment of the Arts American Rescue Plan.

This is the first in a series of articles exploring the Morean Arts Center, (including the Chihuly Collection and the Morean Center for Clay), and classes, teachers, exhibits and events over the next year.
. . .