and US Military Veterans 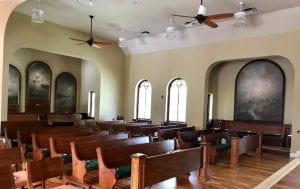 The Unitarian Universalist Church (UUCTS) in Tarpon Springs, is the oldest church in the city.  Established in 1885, the present building dates from 1908 and has recently been restored.

The bad news was the church was forced to close for six long years to address a series of issues including sink holes. But the good news is that it’s now fully restored, back open and looking more as it did when it was originally built.

For over 100 years the sanctuary of the church was a darkened space with no windows that entombed eight large historic paintings created by artist George Inness, Jr. (1854-1926). The depiction of spiritual light is a key element in Inness, Jr.’s paintings.

Today natural light enlivens the interior and celebrates the paintings.

The story of the Inness, Jr. paintings is one of artistic and spiritual philanthropy. Inness, Jr. was the son of George Inness (1825-1894), one of America’s most famous artists in the late 19th century, who wintered in Tarpon Springs from 1890-1894 and created some of his most famous late works here.

George Inness, Jr. returned to Tarpon Springs in 1902 and came every winter until his death in 1926.  Over the years, Inness, Jr. and his wife, Julia, contributed greatly to the cultural development of the city. Julia founded the public library and Jr. established an artist colony that encouraged artists to come to the “Venice of the South” — as Tarpon Springs proclaimed in its advertising.  Many of the paintings of Tarpon Springs by these artists and Inness, Jr. are now in the collection of the Cici and Hyatt Brown Museum of Art in Daytona Beach. 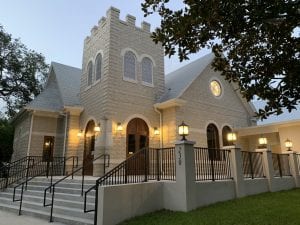 On September 28, 1918 a tornado-like storm hit Tarpon Springs and blew out windows in the Church of the Good Shepherd, as the UUCTS was known then. At the time America was fully engaged in World War I so the windows were walled up because glass and craftsmen were difficult to obtain.

Inness, Jr. was a member of the church, quite wealthy and an established artist. He offered to create a triptych of paintings for the sanctuary to replace the windows.

Accolades for his artistic philanthropy spread far beyond Tarpon Springs. Inness, Jr. saw an opportunity for the church to become a repository for the spiritually inspired works of his late career.

The result was five more paintings installed in the sanctuary and three masterworks given to the church following his death. These contributions provided a legacy that established Tarpon Springs as a city for the arts, a reputation it continues to enjoy today. The list of accomplished artists living in the community is long and includes well-known artist Christopher Still, whose major works hang in the Florida House of Representatives in Tallahassee. 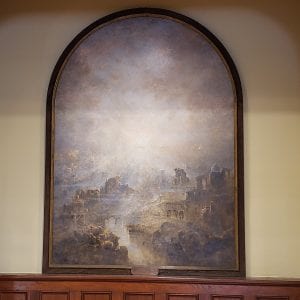 The church’s Mission Statement reads, “We are a liberal community for all ages promoting spiritual growth, social justice and the arts.” The program on November 11 for Veterans Day honors U.S. Military Veterans and their service, provides a historical perspective for the original Armistice Day in 1918 — and feature a large 9½ foot by 7-foot painting George Inness, Jr. created for the sanctuary in 1924.

The painting, called The Only Hope, became one of the most celebrated paintings of the 1920s.

It traveled from Tarpon Springs on a national tour and was praised by President Calvin Coolidge as “a representation of wrath overcome by love.”

The Unitarian Universalist Church of Tarpon Springs accomplished the 2019 induction of George Inness, Jr. into the Florida Artists Hall of Fame.

The event on November 11 is free and open to the public. Kathy Hopkins, UUCTS Church President, describes the sanctuary as “calm, safe place.”

Find out more about artist George Innes, Jr.
at the Florida Division of Cultural Affairs

View more of his work here