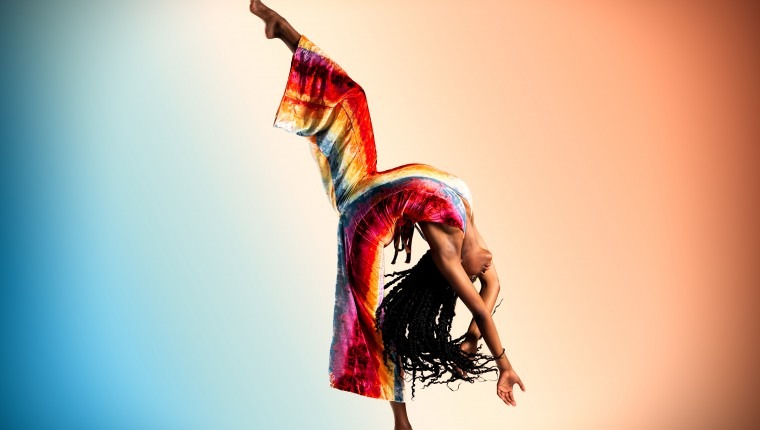 . . .
Through October 17
The Gallery at Creative Pinellas
Details here

. . .
Alright, all you photo enthusiasts, who out there can name an internationally known dance photographer?

Unless you are somehow intimately attached to the genre, probably not many names come to mind. Barbara Morgan’s gorgeous images of Martha Graham are considered iconic. Richard Avedon spectacularly photographed Mikhail Baryshnikov and Rudolf Nureyev, but is better known for his fashion and portraiture. Lois Greenfield is celebrated by those in the know, but not well known among the general population.

Dance photography is difficult. It requires expertise in lighting, exposure and framing – but also requires a sensitivity to the dancer’s energy, technique and form.

You might even say it requires a relationship of trust to fully capture the dancer’s individual essence. The dancer has to feel comfortable enough to perform without worrying about how they will be portrayed in the final product. It is an occupation of passion. How does one make a static photograph capture the movement and energy of bodies in motion?
. . .

. . .
Who better to curate an exhibition of dance photography than a dancer? Not just any dancer, Helen French started in St. Pete and studied at Juilliard, was a principle dancer with the Buglisi Dance Theater in New York, and has performed at such noted venues as Jacob’s Pillow Dance Festival, Chatauqua Dance Festival, Vail International Dance Festival and the Rishon LeZion International Festival in Israel, among others. She is now a local treasure performing throughout the Tampa Bay area and was recently named the 2021-2022 Artist Laureate at Creative Pinellas. This exhibition is an extension of that award.

The show includes almost 60 photographs by ten local photographers selected by French. An added bonus are two photographs of French taken by famed photographer Lois Greenfield. Those two are not dated, but intimate – an interesting story must lie beneath. It is good that French included photographs that feature herself, as they very much add to the exhibition.

While the works are presented in the beautiful building that the Gulf Coast Museum of Art used to occupy, it is very much a gallery show, with all works available for purchase. While all are accomplished and professional, the photographers vary greatly in experience, technique and sensibility.
. . .

. . .
I have had the privilege to work with Tom Kramer at both the MFA, St Petersburg (where his work is held in the permanent collection) and for a solo exhibition at The Studio@620. He is a master at capturing the essence of an artist with a real sense of movement. He wonderfully gives credit to the dancers in his titles, and somehow manages to isolate the performers within the frame in a distinctly focused way. He has photographed for such esteemed companies as CBS, Lorimar, and Universal Studios, publishing extensively in newspapers, magazines and journals.

. . .
Denzel Johnson-Green, whom I also consider a friend, has a very different sensibility. Johnson-Green is a young poet, the founder of Neptune Poetry Magazine and earned his photo credits taking pictures at Studio@620 events and performances. He’s been the resident photographer for local choreographer and dancer Alex Jones since 2018. His photographs feel spontaneous and unexpected, like a street performers’ version of a dance photographer. You may have seen some of his work in this very journal.
. . .

Another standout are the works by Angel Marie Tisdale. Her photographs display a unique combination of strength and beauty. The initial response being, “Isn’t that gorgeous?” and then, “Whoa, wait a minute, how’d they do that?” Tisdale runs her own studio At Dance Art and is the co-founder of Dance Accepts Everyone, a world-wide dance positive group.

One of my favorite photographs in the exhibition is an underwater image by Ricardo Romero. It is dreamlike and tender. One can only guess what the difficulties shooting beneath the surface must be. There’s also an above water image from what I assume is the same series titled Surreal. The name is apt. It features a woman floating above the surface of a reflective pool. Clearly she is in movement, flipping through the air, yet remains eerily calm and serene. Ricardo was born in South America and is relatively new to dance photography, having focused prior on travel and architecture. He is now the editorial photographer at the Brandon Ballet.

. . .
Another standout is the photograph Left Hanging by Erin Tindol. On its own it is compelling for its rich color and slightly off-centered sensibility. It is unique in this setting because it is the only photograph that doesn’t include a dancer. We see a dancer’s barre with fabric draped over, and a curtained window behind. There is no body, and yet you sense the energy of the dancers who have held that barre and stolen glimpses out that window. Tindol is a painter as well, and this photograph definitely shares a painter’s aesthetic.
. . .

. . .
Sorcha Augustine’s work is dramatic, perhaps reflecting her experience in theatrical photography as well as dance. She is best known in this area for her work with Sarasota Contemporary Dance and the Westcoast Black Theatre Troupe. In an artist talk through Creative Pinellas she shared that she feels an energetic rush and connection to the performances she captures. You can sense this in her work. You witness the passion and energy.
. . .

. . .
Some more spontaneous examples of dance photography are offered by Otavio Jones, Martha Asencio-Rhine, John Pendygraft, and Boyzell Hosey. Dance doesn’t always take place in a stage setting and these artists have made compelling images of people dancing at classes, funerals and rehearsals. Dance is everywhere in our community and it good to be reminded of the beauty and movement that surrounds us every day.
. . .

. . .
I live in St. Petersburg and do not make the journey to Largo often. If you are like me, take this as a reminder that there are compelling reasons to visit.

While you are there, leave time to see Cathy Tobias’s COVID Ribbon Memorial and visit the adjacent Florida Botanical Gardens.