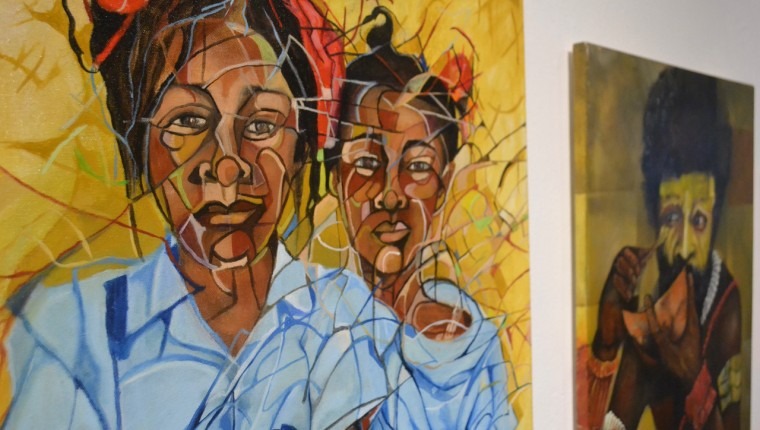 Words and Photos by Denzel Johnson-Green

If you missed it, there won’t be another like it. For about a month, TheStudio@620 hosted Green Book of Tampa Bay, featuring African American artists from miles around.

Green walls and all, works varied from sculpture to installation, painting to photography – even shoe and backpack art showed out for reasonable prices.

The organization’s name is a nod to the Negro Motorist Green Book first created in 1936 by Victor Hugo Green, who sought to make a mobile guide that’d highlight safe businesses and roads for traveling African Americans in the Jim Crow American South, where anything could happen to anyone darker than tan. Green Book of Tampa Bay acts with a familiar intent, to highlight African American businesses and artists in a way that can support and publicize them – and show them good passage to a healthy Black economy.

The gallery exhibit and performances were stellar. People mixed and mingled, masks were worn, Motown jams trumpeted – lively like a new puppy – and green was everywhere to be seen. Art on the walls was as different and unique as the people who came to see it. Maybe this was one for the Black community.

What follows are my interpretations and engagements with several pieces in the gallery.

African ancestors
gaze with so much eye!
Across the water, their

descendants they spy.
Iyaami watches us,
they don’t know

what to make of
who, what we are now.

Our noses, less wide,
our lips, less stout
our bodies, more round

we are something different now
foreign sounding, watered down

but with that same dark matter circuitry.
Every step we take, we leave
trenches of recursive memory.

On Ashley Rivers’ Women in Art and Roses

Roses grin to what gives life
otherwise a smile is earned

when she doesn’t smile,
your face spreads concern

you a judge and gavel and jury,
court never adjourned.

Not all sunshine is cause for blooms
women don’t need to smile for me or you.

Male gaze, like our sun’s rays
can be cancerous, so save us–

warmth is assumed, but what if
that very warmth could hurt you?

Breasts are unique among life forms on Earth.
The feature first evolved among a group of what’s called proto-mammals.
Related to dinosaurs, these creatures laid soft, leathery eggs in nests on the ground.
This moist, dirty environment was especially prone to harmful bacteria and microbes;
many died, but at least one mother’s skin glands began to secrete fluids that fended off germs.
Completely by accident, some brave or desperate hatchling would find it tasty,
lick it up (probably as cats do) and it would later become consistent food for the hungry rug rats
and they would be known
as the very first mammals
to scurry, swim, and walk this Earth.

Humans are the only mammals to have full,
round, pendulous breasts year round–
regardless if we’ve ever been pregnant.
Scientists scratch their heads and have many
interesting and plausible theories as to why this is

but for whatever reason,
breasts have been bound
put in bras, corseted, enlarged, reduced, swung freely
and shamed and fetishized

it leads, like many observable injustices
to the oppression of women.

When did we as men try to control
what was so good and pure?

What is it worth
to pick a flower
or clip a wing
to declaw a thing?

Why can’t something just be beautiful and helpful?
Why is that not enough for us?

I’d yell if you threw me into a black hole.

But throw me through
the blowhole of a whale so blue
and I’d laugh and swoon
and backstroke just for you.

The event horizon
of a cetacean risin’
is nothing short of a miracle.

Interstellar pigment
violent violets
gaseous bodies the width of twenty
solar systems neck to neck
paint so wet, it’s still dryin’
eyes so fixed, Hubble vyin’
concentric cyrin’
you didn’t consent to this
emotional rollercoaster, high flyin’
got you cerulean droolin’
man who you foolin’?
I know you like her art!
Show me some cash
and I’ll show you
a red sticker fa ya ass.

[Where we come from]
hunter and gatherer
fit and close knit

respect your elders
be gracious and love
but take no shit.

3/5 of a human
breeding bulls
psychology in ruins

been avoided, beat, lynched,
given some “freedom”
white people sure is funny.

[Where we are]
Who introduced
the drugs and booze?

cravings for creative
loathings, self hatings, but
dark skin is always worth saving.

You can read about the Green Book of Tampa Bay exhibit
at The Studio@620, and read statements by the artists here