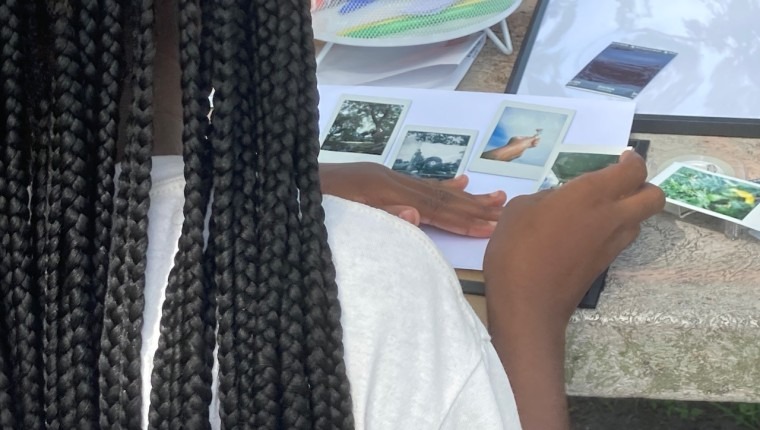 Cultured Books Literacy Foundation (Celebrating the #LiteraryLifestyle)
was a recipient of the Pinellas Recovers Grant provided by Creative Pinellas
through the National Endowment of the Arts American Rescue Plan.
This article, the second in a series about the activities of CBLF,
focuses on a unique program that has benefited
directly from this crucial funding – BLC.

Its recipe is simple. Encourage young Black kids to read a self-affirming picture book. Invite an artist to offer a workshop related to that book’s subject. Bring everyone to the park and mix in some waffles.

The artists’ workshops are thanks to the Art of Literacy Residence Program launched in May by Cultured Books Literacy Foundation with funds from the NEA/Pinellas Recovers grant provided by Creative Pinellas and the Pinellas County Board of County Commissioners. The recovery funds were made available as part of the American Rescue Plan signed by President Biden in 2021 to help organizations, including arts organizations like the National Endowment of the Arts, impacted by the pandemic.

And the picture books? They are chosen by Lorielle Hollaway and Ray Grace and approved by the CBLF’s Youth Advisory Board. Hollaway is the founder of Cultured Books, the pop-up children’s bookstore and art gallery that gave birth to the foundation, an organization that promotes literacy in the Black community of South St. Pete through its bookstore, arts and humanities programs, and community outreach. Grace is a foundation board member and its Lit Liaison.

BLC usually meets on the first Saturday of the month in Wildwood Park, Shelter #2, 1000 28th Street South in St. Pete, but the November 5 reading and workshop will take place at the St. Pete Reads! Literacy Festival at The Dr. Carter G. Woodson African American Museum, 2240 9th Ave S, from 10 am-4 pm. The featured artist is author Jamecia Buggs who will read from her own book, I Can Yoga and provide a yoga demonstration at the beginning of the festival.

This month’s BLC also had a change of venue — but also a change of plans, due to the arrival of Hurricane Ian.

The October 1 meet-up was originally scheduled to take place on October 1 at 833 22nd Ave S, the headquarters of Cultured Books.

The change to 22nd Avenue South, the historic Deuces corridor, was a perfect fit for chosen book – Dream Street. Written by Tricia Elam Walker and illustrated by her cousin Ekua Holmes, Dream Street celebrates the Roxbury neighborhood in Boston where the two grew up together.

After the reading (and a breakfast of waffles), organizers had planned to celebrate of their own neighborhood by taking a tour of its nearby murals, led by Nikki Hill, an MTSS (Multi-tiered system of support) and DEI (Diversity, Equity and Inclusion) Instructional Staff Developer for Pinellas County Schools.

But then Ian came along and changed everyone’s plans.
. . . . . .
So instead of a mural tour, on October 1, BLC followed the reading of Dream Street with a street clean-up.

“Join us as we clean up the debris left by the storm,” read the revised invitation on Instagram. “Gloves + trash bags provided.”

After all, the C in BLC stands for CommUNITY.

The mural tour, however, has not been cancelled completely, only postponed. Soon, BLC will read Dream Street again and offer the mural tour by Nikki Hill. They are calling it BLC: Dream Street Part 2.

Through her work with the county schools, Hill works to create equitable opportunities for marginalized students by helping schools cultivate a positive culture and climate for all. A strong advocate for early literacy, she tutors elementary and middle school students at a nearby recreation center a few hours each week. As the daughter of a librarian, she always has had a passion for reading, a love she hopes to ignite in the children she serves.

When the event is rescheduled, Hill will give a brief history of 22nd Street and then lead the kids on a tour of several murals in the area.

According to Visit St Pete Clearwater five murals are located in the Deuces Live District – four within walking distance of Cultured Books’ location.

The fifth mural on Visit St Pete Clearwater’s list — “You Are Beautiful,” “Be the Change,” “Love Has No Borders,” and “You Are Enough” by Matthew Hoffman —  is between 6th and 7th Avenues, facing west on 28th Street S. That’s a bit of a hike from 22nd Avenue S., but is certainly in keeping with the spirit of BLC’s October book Dream Street. The 43-foot work of affirming messages includes handprints and words added by neighborhood residents of all ages.

Affirmation is what BLC is all about.

I Affirm Me: The ABC’s of Inspiration for Black Kids by Nyasha Williams, illustrated by Sóf’ya Glushkó appropriately was the first BLC book that Hollaway chose to inaugurate the Art of Literacy Residence Program. Held in May, the BLC session was paired with a poetry workshop created by two local literacy artists – African-American and Japanese poet Yuki Jackson and yoga and meditation teacher La Treca Ali.

Throughout the summer a wide variety of literacy artists —including two photographers, two science educators, a chef and a musician —  offered workshops to kids that echoed the themes of BLC’s chosen books. But don’t picture “eat-your-vegetables” lectures. These were more “let’s have fun while we learn” sessions.

In July a husband-and-wife team — Shai’Robia and Marquis Davis, the co-founders of the St. Petersburg-based Shaping the Early Mind, an after school program that introduces careers in science, technology, engineering and mathematics to disadvantaged youth — was invited to hold a STEM workshop to accompany the reading of Whoosh: Lonnie Johnson’s Super-Soaking Stream of Inventions by Chris Baron, illustrated by Don Tate. In addition to learning about Johnson, the Black NASA scientist who invented, among other wonders, the super-soaker, the kids were treated to a round of water play.

In August, after reading When Grandma Gives You a Lemon Tree, by Jamie L. B. Deenihan, illustrated by Lorraine Rocha, Chef Ja’Vin Lecount held a lemonade-making demonstration. What goes better with waffles than lemonade? And to amplify the reading of Drum Dream Girl: How One Girl’s Courage Changed Music by Margarita Engle, illustrated by Rafael López in September? Who better than musician Samuel Luna? Luna, who currently teaches science, Spanish and music at Tampa’s Lee Academy, was born and raised in Spain where he studied environmental sciences and marine biology and where his passion for music was nurtured.

One of the most ingenious BLC workshops took place in early July as kids gathered at Wildwood Park to read Gordon Parks: How the Photographer Captured Black and White America by Carole Boston Weatherford, illustrated by Jamey Christoph – and were treated to a photography safari led by local photographers Byron Boykins and Tre Butler.

Parks is a great role model for kids. A self-taught photographer, he used his camera to chronicle the segregated world of his day (he was the first African American staff photographer at Life magazine). His story is a powerful lesson in how photography can be used for social change – as true today as ever, considering the important role cameras have played in capturing examples of police brutality.

But the presence of Boykins and Butler at the BLC event provided an even more immediate role model for kids that day in the park – two successful photographers who emerged from their own neighborhood.

Boykins and Butler both brought examples of their own work to show the kids. Boykins launched his own photography studio, Eyeconic Creations in 2017. Butler, who calls himself a “raptographer” – someone who tells stories through music and photography – has only just begun his photography career. A recording artist, he started by making photographers of musicians in their studio sessions and at concerts. “Portraits, it’s my favorite thing to do,” says Butler who considers Boykins a mentor. “Every photographer has their own style, but to me portrait work speaks volumes.”

For the photography workshop, each kid was given a Fujifilm Instax instant camera and encouraged to run around the park and make five pictures, of anything they found interesting. Later Boykins and Butler showed them how they could take selfies — with the aid of mirror. Finally, as a keepsake, they were given a glass frame to mount their images, including their self-portraits.

Cultured Books is a recipient of the Pinellas Recovers Grant,
provided by Creative Pinellas through a grant from the
National Endowment of the Arts American Rescue Plan.