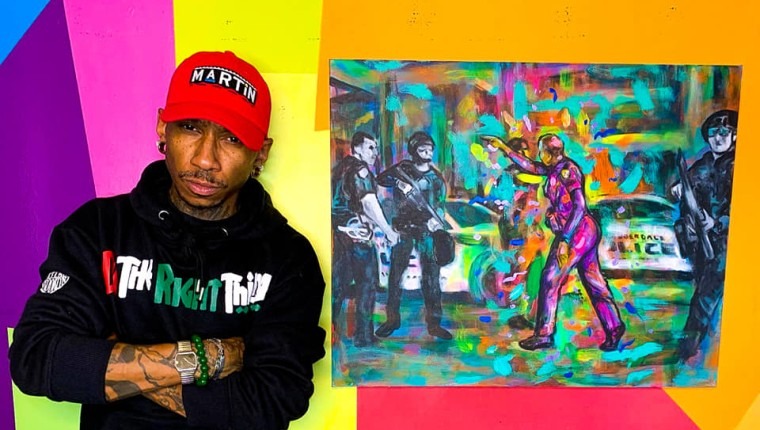 Visual artist Cam Parker has only been in Tampa 11 years, but he’s already left a mark.

His murals are everywhere – Lizzo in Ybor Heights, Dr. BBQ in St. Pete’s EDGE district and probably the most recognized, Lady Gaga in Tampa Heights.

Most recently, Parker contributed his talent to the Black Lives Matter mural in front of the Dr. Carter G. Woodson African American Museum, on 9th Avenue S. in St. Petersburg. Unveiled during the Juneteenth celebration, he painted the first “A” – a crimson masterpiece.

Murals are not Parker’s only medium – he paints on everything from suitcases and jackets to boats and cars.

“I’m just trying to be as well-rounded and as experienced as I can be in the art field,” Parker says.

“After a while I decided I didn’t want to work for anyone and I decided to stake out and try to see if I could make the full-time art dream happen,” Parker says.

And happen it has.

Parker’s creations have made a viral impact for years, with fan art he has gifted to artists such as Lizzo, Naomi Campbell and Diana Ross. A long list of celebrities have thanked him onstage or via Instagram.

“My goal and desire is to leave that person who has inspired me with something I’ve done for them,” he explains. “I never really want an autograph… just to spread the inspiration that they’ve given to me. It makes the whole art-love, music-love, pop-culture-love go full circle for me.”

The art meet and greets started when RuPaul’s Drag Race contestants appeared at Bay area clubs, and grew from there. Now Parker’s work has progressed from pop stars to political icons, heroes and general trailblazers.

There’s a portrait of activist Tamika Mallory, with words from her speech at a Minneapolis rally – “America you want us to do better? Then dammit, you do better” – surrounding a raised fist.

One of Weijia Jiang, CBS Reporter and fearless Trump questioner. There’s the powerful statement “Knees or Trees, Either Way, You’re Still Lynching Me” painted on a vintage suitcase in homage to Nick Cannon’s “I Can’t Breathe” spokenword video.

There are prints available for purchase of Parker’s Need Something Done, HIRE A Black Woman which shows the scene of black Fort Lauderdale police officer Krystle Smith confronting a white male colleague for throwing a protester to the ground.

“I was so inspired by that situation, it struck home with me immediately,” Parker says.

“It was really, really inspiring to see,” he adds, “There have been debates, in the George Floyd case, like why did the other three officers not do anything? Not say anything?

“That was kind of what the world needed to see in that moment,” he says, “I wanted to pay homage to that. Pay homage to her.”

When he can, Parker attends Black Lives Matter protests – where his protest signs are works of art, keeping true to his style and messaging.

“It goes hand in hand with the… art I do…” he explains, “It’s either like a song lyric or a sassy thought that’s [running] through my head. I try and parlay it into something that has to do with the movement.

“I don’t feel like there has to be a distinction between me being a black man that wants change, and wants equality and wants better for the entire world,” he continues. “I can still be sassy and I can still be feisty and I can still be a humongous Beyonce fan or a huge Gaga fan and translate and kinda filter that through myself and make it relevant to the movement via the signs that I carry.

“It’s like the new wave and it’s really, to be quite literally, witnessing history,” Parker says. “To be right here as it’s happening. And to know that this is going to be a point in time that is going to be in history books. “

For now, Parker has hope, if legal changes are made.

“I’m just hopeful for there to be a change made in the government and it’s a thing that can’t be ignored which is really cool… There’s no getting around it,” he says.

”We can’t change the channel. We can’t turn a blind eye. It’s here. It’s in your face.”

What does a perfect future look like for Parker? As a whole, think Lady Gaga’s latest album Chromatica meets Wakanda.

“Peaceful, stylish, completely equal,” he describes. “Not necessarily perfect but getting past some of the bulls**t.”

His personal goals are a bit more ambitious.

“Mainly I want to be self-sufficient from an art standpoint,” he says, “I just want to be able to see it, dream it, make it.”

There’s no doubt that will happen. Parker is a fearless artist the world needs right now.

His work is for sale at
bizarrodesigns.com/collections/painkiller-cam-shop-all