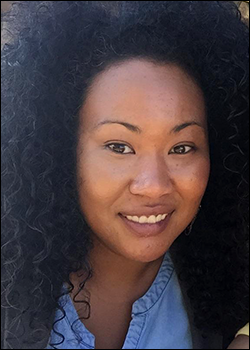 Yuki Jackson, a black and Japanese poet, is a graduate of the University of Tampa MFA Creative Writing program. She has been featured in several readings and her work has appeared in Foundry and Juked. Yuki is the founder of The Battleground, an at-risk youth program in Sulphur Springs, Tampa and she also teaches English Composition at Hillsborough Community College. Her writing is inspired by her Soka Gakkai International Buddhist practice, hip-hop lyricism and the art within daily life. She can be found on Facebook and Instagram @yukijacksonpoet. 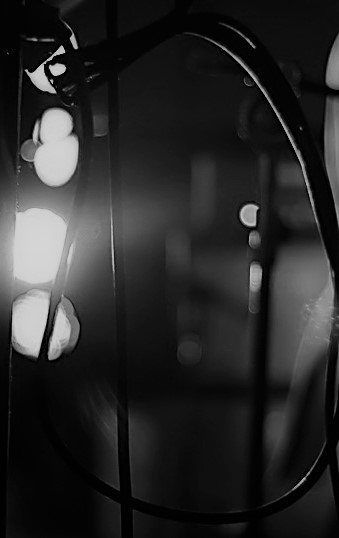 If you open the door,
the alarm will sound
at the source
sound is the loudest
I drive and chant
Nam-myoho-renge-kyo
with music in the background
each song beat aligns
when I say myo
same as a heart rate
The first living creatures,
set to Beethoven
Fantasia opens
to orchestra members
tuning their instruments
Abstract patterns,
shapes and cloud formations,
reflect the sound and rhythms of the music

A storm, lightning bolts
the characters dance together
until their palace collapses
The devil summons evil spirits
until driven back–the sound of a bell.

A chorus singing Ave Maria
is walking with lighted torches
A YouTube comment says
originally Walt Disney
wanted Fantasia’s last image
to be Mary
A young woman walks
into the library
with a phone charger in her mouth,
the prongs touching her tongue
I told Eyes and he asked,
was she wearing a headwrap, sweatpants, and flip flops?
on the back of the man’s shirt,
is it a synapse
or a thunderstorm?
he said it’s like electricity
when he sees me
or when we touch
he sucked on where my thigh meets my hip
and I felt a surge of electrical current
A boy said the girl he was talking to
was his outlet
scientists still haven’t been able to figure out
lightning and where the massive charge
is coming from
Sending a current through this much air
takes massive volts
One scientist has researched
star explosions,
millions of charged particles
forced into outer space
the lightning we see now
is a star exploding
halfway across the galaxy
and a million years ago
and a single discharge
from a firearm
produces light and sound
the union
of an egg and sperm
ignites a spark
the battleground
began with gunshots
A light ray burst —
Life.