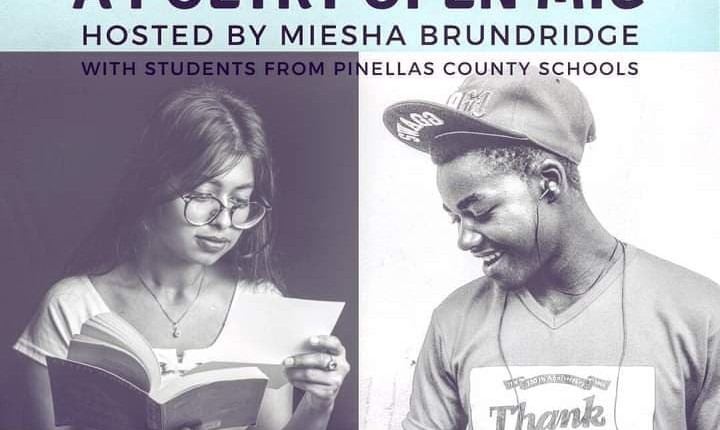 For this post I want to say how incredibly grateful I am to encounter such amazing talent from young writers. I am constantly inspired by my students and will share poems by three writers in this blog post. Last night there was a virtual open mic from high school students in various regions of Florida whose work was selected for the Poetry Out Loud Anthology, which I had the privilege of editing for Keep St. Pete Lit. Here’s a stunning poem by Anjali Byju, who won second place in both content and in performance:

digging his mud-crusted fingers into

the deep pockets of his blue jeans. The

type of wry smile creeping on his face that made girls

fall in love and fathers curl their fists. He was the

kind of beautiful that got away with anything. Even as the

milky sky and bleached field faded into the atmosphere, those eyes,

oh those eyes, made that sinner one of God’s favorites. Caught,

red-handed, dough-eyed, one would’ve thought him to be a child.

Though, he wasn’t. Years of life and the way it had at breaking him down, left the

man in poor spirits. Disappointment was his kryptonite. The fear that everybody

else held a magnifying glass to the part in his lips, waiting, yearning,

for the lost soul to make a mistake. The fear that his father would return

once again, except this time with a sharper paddle and even fiercer words.

boys she once considered her friends. The fear that this town, this minuscule piece

of barren land, would be the last place he ever lived to see. Small-minded people

with small-minded dreams. Silent if not for the occasional roar of a passing bus at

midnight. Awake are the miscreants and black hats waiting for the sun to fall.

I also wanted to share a poem from a booklet I put together featuring my writing students from the Virginia Leonard Community Center. Here is a powerful and important poem by Jayla, a middle school student:

Doesn’t mean I have a heavy accent,

Doesn’t mean I listen to only

“our type” of music,

doesn’t mean I carry around a machete,

Doesn’t mean I freshly grow everything I eat,

Doesn’t mean I live by a beach,

Doesn’t mean I don’t have electricity.

Why should you care?

Why do you mock me?

Why do you act heartless?

My friend and poet Miesha Brundridge is curating an event later today called Youth Speaks. Miesha is bringing young poets from the community and Pinellas Country Schools to Studio 620 to showcase their talent. Miesha is determined to create more spaces for youth to be heard through their poetry. These young intelligent people are creating currents of change with their powerful writing. The show will be livestreamed and you can tune in by going to Studio 620’s Facebook page. I hope you can check it out!