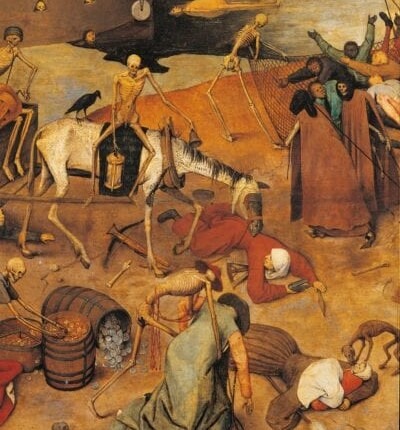 Everyman. O, to whom shall I make my moan

For to go with me in that heavy journey?

I first read Everybody by Branden Jacobs-Jenkins in a directing class in early March, just days before the pandemic shut down. Described as a modern riff on the fifteenth-century morality play Everyman, the play follows Everybody as they journey through life’s greatest mystery—the meaning of living and the inescapable reality of death. It is witty, existentialist, and ambitiously meta-theatrical. When I started reading it for the first time, it didn’t take me long to register its uniqueness. One example: actors rotate parts in a lottery drawing at the top of every show on stage. How’s that for death symbolism?

Before the pandemic, I thought we needed to do this play because in our modern, highly sanitized world we were so removed from death. A lot has changed in the world since I first read this play. In this last year, I have thought about the meaning of life and the consequences of death more than I ever had in my previous twenty-eight years on this great earth. What was once existential fear,, like how humanity will survive our world’s climate crisis, turned to immediate, impending danger in which I feared for my life and the lives of my friends, family and loved ones. Seeing bagged bodies and mass graves on the news and watching as our most mobile society in the world’s history came to a crashing halt was shocking. As more and more are vaccinated and we can start to see a way out of this trauma, what will we be left with? How will we move forward?