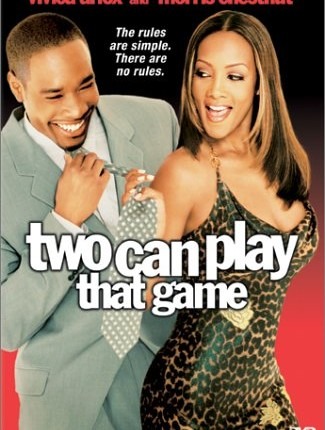 Anybody who truly knows me, knows my obsession with black cinema in the 90’s and early 2000’s. There are so many films that I am completely obsessed over but it would be too many to name and we just don’t have that kind of time. Okay? So, let’s make this a little bit simpler.

In terms of genre, my favorite is romantic comedy. The film in that category that stands out the most to me is, Two Can Play That Game. I don’t know if it’s because Morris Chestnut is eye candy, or if I just love how Vivica A. Fox owns being a woman in control and making the rules! The overall concept, of trying to teach a guy a lesson but it backfires is just way too relatable for me and its pure gold. If only we could actually control men, this world would be a better place. (Just kidding!)

Now, as I was saying in my last blog post, this would probably be a film I would like to imitate as an actress. And probably produce as well. I think we deserve more films with black leads that are lighthearted and fun, and essentially unveils a love story. Some of the late 2000’s films that I believe capture that essence is Think Like a Man, About Last Night and most recent, The Photograph. In fact, these were all actually produced by St. Petersburg’s very own, Mr. Will Packer. He get’s it!

SN: If you haven’t seen, Two Can Play That Game, I think you should give it a try! Super fun!