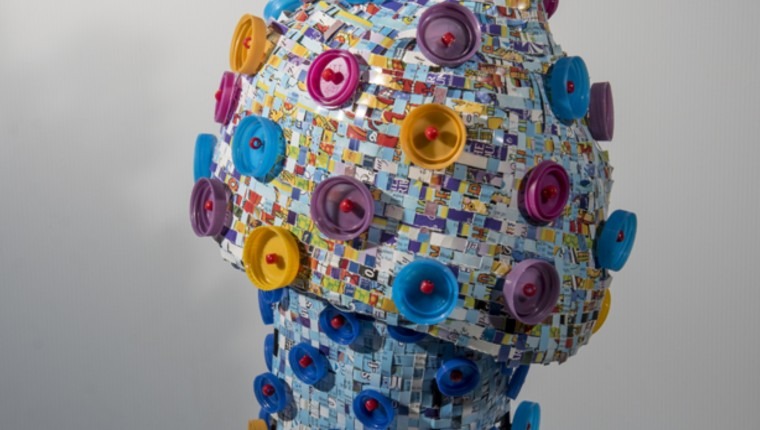 I used to read a story to my little sister Tina every night at bedtime. She was four, I was 17. It was a ritual we started when she was old enough to talk.

Today I have a story for her that she can read for herself. It’s a story that is based on a true event that happened 65 years ago. A childhood memory that I treasured and used in a 2019 sculpture titled My Nest and Its Treasures.

I’ve been a communicator all my professional life and had just started taking myself seriously as a contemporary art basketmaker. Creating different shapes and forms with strips of recycled postcards was interesting (one of my signature shapes was a bird’s nest) but I needed to do more.  I challenged myself to find a way to tell a story through my art like most other fine artists. I wrote three short stories, cut the paper in strips and then “wove the stories” into three eggs.

The first short story that you’ll read today is about my Grandmother, my brother and his favorite television show. Every reading makes me laugh.

Twice a week, he happily anticipated and talked about his favorite show, Batman with (of course) Adam West and Robin (Burt Ward). Batman not only was an action superhero, he told kids they should do their homework, eat their vegetables and drink milk! Batman and Robin picked up the clues left by bad guys, got captured by the bad guy’s henchmen, got into more fights and then were recaptured and placed in a deathtrap. The cliffhanger ended the first episode and was the beginning of the next day’s show. Ultimately, Holy Batman (!) the caped guy and his ward had more fights and captured the villains, making Gotham City once again, safe, for all of its citizens.

Enter our grandmother. Literally straight off the plane from China, Rich’s next Batman recruit. She had come to live with us. Grandma was a little old lady, about 4 ft. 8″, who dressed always in black – a padded black Nehru-style jacket, black pants, black flat Mary Jane-style cloth shoes and a sweet black velvet beret. We didn’t really know how small she was as she wore layers upon layers of clothing.

We didn’t know how old she was either. She had wrinkles all over her face and bobby-pinned her ear-length grey and white hair behind her ears. She could speak only Chinese.

My dad spoke Chinese. We didn’t understand every word but the gist of his conversation with his mother was this – it was nice of Richard to share the TV with her. I am the third daughter in my family of six kids. My dad, born in Canton, China, grew Chinese vegetables in New Jersey. All my life I felt (like Amy Tan and other Asian American authors who later described these feeling in books of fiction based on their backgrounds) that I grew up in two worlds – one American, one Chinese. Never quite comfortable in either one as I didn’t speak Chinese (although I did as a young child) and because I looked very different from my classmates.

I remember most adults and teachers were kind. The kids? Some name-calling and perhaps a few who used their fingers to slant their eyes at me. I never responded. Kept quiet. Didn’t make waves. The inscrutable Asian.

It pains me to hear and see the recent reports of Asian American hate crimes. A video of a 65-year-old woman knocked to the ground, kicked and slapped multiple times and ignored by at least two men who witnessed the assault, was shocking.

Anti-Asian American hate crimes reported to police rose 149 percent between 2019 and 2020 during this pandemic. Why is this happening? Researchers faulted negative stereotyping of Asian during the early rise of COVID-19 cases last spring. What’s more, the spike in hate crimes against Asian Americans occurred when overall hate crimes dropped seven percent.