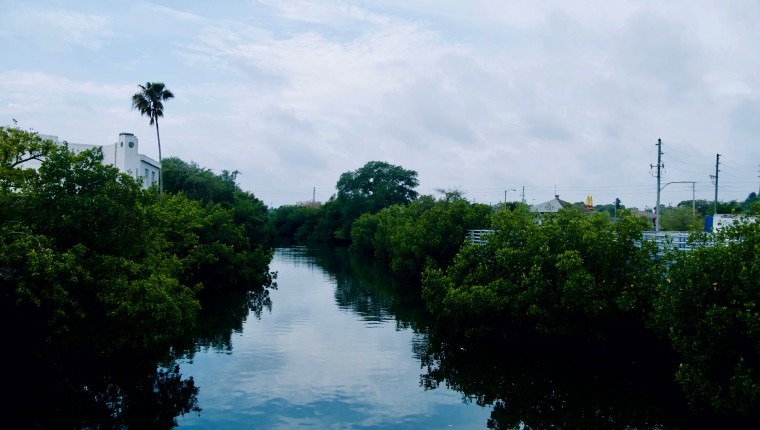 Take Me To the Water(s) Exhibit
puts Southside’s Salt Creek Ecology,
Gentrification and Race on Display

. . .
Through photos, spoken word and sound, four artists will weave together an evening that examines the Salt Creek area of south St. Petersburg, during TAKE ME TO THE WATER(S), an exhibit at the University of South Florida St. Petersburg.

Featuring the work of four creators from the Friends of Salt Creek Summer Artists in Residence, a program sponsored by the Tampa Bay Estuary Project, the work considers the environment and ecology, urban development, community, gentrification, and race and class issues that surround the Salt Creek area.

Sound artist Sabrina Dalla Valle, a resident of the Old Southeast neighborhood, shares that she has spent much time over the past seven and a half years walking along the creek, from Bayboro Harbor to Bartlett Park, and along Harbordale and Lake Maggorie on MLK.

She notes that, “We all have noticed how rapidly things are morphing, and how quickly the demographics are also shifting –but without a lot of conscious attention to the foundations of our small, eclectic community. What is the thinking behind these rapid changes?”

She surmises that most of her neighbors who live near the park are not even aware that the creek runs through it – or that it creates a lake in the center of the public green space.

“Salt Creek is a waterway filled with interest to me, mostly because it flows through diverse parts of town where different people have a chance to come together as one community. The creek protects our properties in flood management, provides places for people to rest and connect with ‘the wild’ – and serves as habitat for many fish and birds, as well as the occasional alligator,” Dalla Valle adds.
. . .

. . .
She also notes that the ecology of the Salt Creek area is about to face radical change, since the St Petersburg City Council voted last year to redefine the area’s land use from a Special High Hazard Flood zone to a high-density development zone. There is a 2-billion-dollar development proposal that is also being considered.

Historical background will be provided by Thomas Hallock, including news clips dating back to 1908, which reveal the city’s haphazard approach to the area south of downtown through the decades, along with its discriminatory practices and attitudes towards African Americans and those of lower-economic status who, over the years, lived on the waterways in various sea-vessels.

One of Hallock’s contributions notes that as early as 1923, a city planner’s drawings for the area were rejected by area residents because it interfered with private property and lacked “emphasis on racial boundaries.” His investigation also revealed the racist tactics used to jail African American men and use them for city projects.

“Sea walls throughout the city are built by African American men, arrested for spurious vagrancy laws, then put to public projects. Newspapers openly reported on the use of peonage labor,” Hallock writes, sharing a quote from a 1924 piece in the St. Petersburg Times by a police department official who declared he would keep up the “war against negroes who do not go to work”: “If a negro can’t find work, let him come to the police station and we will find something for him. In the meantime, every negro who cannot show that he is usefully employed will be brought to jail.” – John Trotter, Chief of Detectives, St. Petersburg Police Department, 1924

Curator and photographer Saudade Toxosi notes, “Caring for the environment without caring for the people that live in that environment is disjointed, it is incorrect.” She relays the obvious differences in how the city takes care of its wealthier areas versus the low-income areas, and notes the obvious racial factor attached to the difference.

. . .
Geveryl Robinson, an instructor at USF, recipient of the USF Women in Leadership & Philanthropy 2021 Dr. Kathleen Moore Faculty Excellence Award, and spoken word artist, shares the “ambiguous” nature of how different community members view the issues surrounding the creek. She says she was inspired by the art that came out of the time spent with children from the summer camp program at Bartlett Park’s Frank Pierce Recreation Center.

“I drew inspiration from the different interpretations they had – even though they all viewed the same creek. It goes back to our eyes being ambiguous. However, children have a way of putting things into perspective that we adults have yet to master.”

Robinson also shares thoughts on the significance of water in different communities. “For many, the lake or water in general is sustenance. It’s something our bodies need to function properly. It’s so connected to the Black experience, especially the Black church.”

She shares that as a ‘preacher’s kid,’ “Water was where we were baptized and cleansed. Because of the historical divide, what was once cleansing for one group has been corrupted by the other due to pollution, gentrification, or other issues. Unfortunately, this race and historical divide is not specific to St. Petersburg.”
. . .