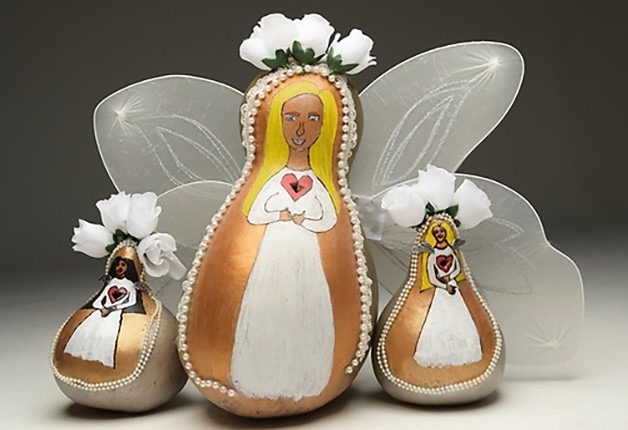 . . .
Visual artist Robyn Crosa gave an Artist Talk earlier this month at the Largo Public Library, to talk about her Gourdgeous Goddess Gals exhibit, on display at the library through July 29.

You can see a video of her talk here, along with a Spanish interpreter. During the presentation she also sings the traditional song, “Follow the Drinking Gourd” and reads a children’s book based on the song.
. . .

. . .
Robyn explains, “People have told me that I look like a gourd – that my body looks like a gourd, and I agree with them, you know?

“I think it’s true – gourds are rounded, they’re feminine in shape, they’re kind of curvy, they look like a female body and some of them are more elongated and slender. But some of them are more rounded and they come in all different kinds of shapes and sizes and that’s what I like about them, because I think that as women, we need to have a fertility symbol that’s natural, that’s made from a natural object and that celebrates the diversity of women and how we’re all beautiful in our own way.

“We come in different shapes and sizes and colors and we’re all beautiful and that’s why I like the gourd. I feel like part of the purpose of the gourd is to counteract the body-hatred problem, and the problem that women in modern civilization have with their body, and the idea that we don’t have to all be like little plastic dolls that are all the same size and made by a machine. We’re made by Mother Nature – and so we need a fertility symbol that is made in nature and that celebrates our diverse beauty.”
. . . 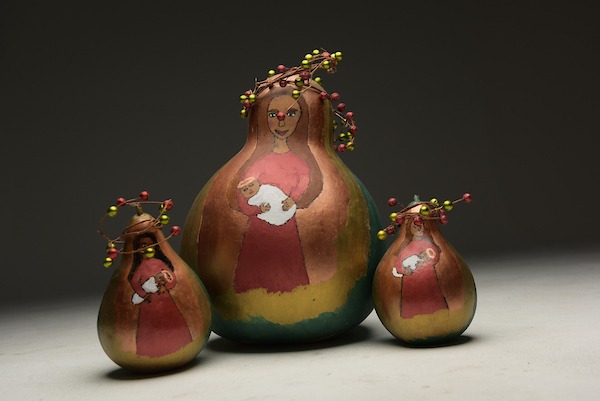 . . .
Robyn intends to continue creating her Gourdgeous Goddess Gals and accepts commission requests if someone has a particular Goddess they resonate with that may be part of their culture or their heritage or their ancestral background.

She has her own personal collection of gourds. “I have a gourd that is painted like one of my ancestors and I keep it on an altar with candles and flowers and I keep pictures of my grandparents on the altar. I talk to the gourd – I talk to her as an incarnation of the Goddess and as an incarnation of my Spirit Guide, who is one of my ancestors. I see it as a symbol of the Great Mother, so that’s basically the intention of the gourds – they are to be used as altar pieces and as power objects and as fertility symbols to help manifest what we want in our lives.” She believes that creating is a form of worship to the Divine Mother, so Robyn sings and write songs, and is a belly dancer and a psychic entertainer.