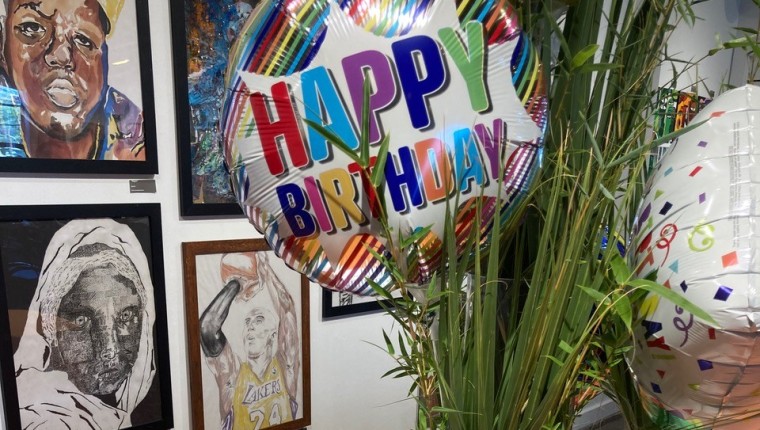 The Studio@620
Celebrating 18 Years of Inclusion

. . .
Regulars call it The Cakewalk. It’s the annual congo line of cakes and other baked goodies – donated by faithful volunteers – that snakes through a crowd of young and old, Black and white, Asian and Hispanic, gay and straight, celebrating the birthday of The Studio@620.

Eighteen years ago at the ribbon-cutting ceremony that launched the Studio on June 19, 2004 there was no cakewalk, but no doubt there was something to eat and drink. Food has always been an important part of The Studio experience.
. . .

. . .
Juneteenth was not yet a national holiday, but it certainly was an appropriate date to launch a center whose mission was and still is inclusion. Back then, as the invitation to this year’s birthday bash reminded us, “a gallon of gas averaged $1.92, and Facebook and G-Mail were new on the scene.” But some things at The Studio haven’t changed a bit in 18 years. The space is still run by a tiny staff — currently only three people — backed by a flock of volunteers. It still is the scene of the most eclectic and numerous mix of art offerings in St. Petersburg. And everyone still is welcome.

And now, thanks to a grant of $20,000, The Studio@620 is “in the black for the first time in 18 years,” says Bob Devin Jones, The Studio’s co-founder and artistic director. “Blacker than me.” The grant is the Pinellas Recovers Grant, provided by Creative Pinellas through a grant from the National Endowment of the Arts American Rescue Plan.
. . .

. . .
The Studio@620 is usually described as the brainchild of Jones and his neighbor Dave Ellis (who died in 2018), and rightly so, but there is a third person, rarely mentioned, who gave the place its heart.

The history of The Studio, in fact, actually begins with a love story.

It was 1997. Jones had come to town from Los Angeles at the invitation of Lisa Powers, then artistic director of American Stage, to direct a Harlem Renaissance version of August Strindberg’s Miss Julie. While Jones was in town, Powers hosted a lunch for him at Chattaway’s, a burger joint on 6th Street that dates back to the ’30s. One of the locals invited was Jim Howell, a contractor and frequent volunteer at the theater. Howell arrived on his bike. “Jamie rode into my life and I’ve never been the same,” says Jones, using the nickname he adopted for Jim.

Howell was equally smitten. Soon after that breakfast Jones moved into Howell’s house on Beach Drive overlooking Lassing Park in the Old Southeast, a neighborhood that’s now a designated Artist Enclave. Jones continued to direct, write and look for acting jobs, but St. Petersburg was not Los Angeles. Howell knew he eventually would have to find his peripatetic partner something more permanent to do. “To keep me here,” jokes Jones.
. . .

. . .
Enter Dave Ellis, Howell and Jones’ next door neighbor. Ellis, a designer specializing in exhibition design, and his wife Astrid had come to St. Petersburg in 1986 to create Great Explorations, a Hands-On! (a company Ellis co-founded) science center and children’s museum, the first in Tampa Bay. Ellis left Great Explorations in 1991 to become a consultant. After Jones moved in next door, the Ellises frequently came over for dinner (Jones’ cooking skills are legend).

The idea for The Studio, appropriately, took seed at one of those culinary gatherings. Howell talked about a building up for sale at 620 1st Avenue S. He had scouted it for an arts association he was working with, but his client wasn’t interested. What a shame, he said. The space would make a perfect theater. Jones and Ellis were intrigued but they immediately began to hatch an even bigger plan for the space. Why not a multi-arts center, a place where people of all economic and cultural backgrounds could enjoy not only theater but art exhibits, music, dance, and social justice forums promoting education and inclusion — all the things that the four neighbors felt passionate about.

The idea took off. Putting together a consortium of 20 people who each put in $10,000, Jones and Ellis formed an LLC which bought the building. They named the locale after its address – The Studio@620. Jim recruited Tim Clemmons to help him turn the abandoned warehouse into a welcoming center for the arts the likes the city had never seen. A fellow cyclist, Clemmons was a visionary architect who saw the potential of downtown St. Petersburg long before anyone else. (He went on to design dozens of downtown projects, including Bliss, The Salvador and The Morean Arts Center).
. . .

. . .
The ceiling at The Studio was left exposed and some of the wood left rough and unpainted (Jones’ idea, not mine, laughs Howell) to give it an urban, arty feel. The downstairs space was left open so it would be flexible enough to accommodate, well – theater, art exhibits, music, dance, and social justice forums promoting education and inclusion. Upstairs were the offices where a skeleton crew — aided by that posse of loyal volunteers — would plan a jaw-dropping number of events over the next 18 years that would change how people in the city viewed the arts.

After its official opening in 2004, The Studio hit the ground running, beginning with a quilt show called Grand Ma’s Hands: One Hundred Years of African American Quilting that opened on December 31 of that year as part of the City of St. Petersburg’s First Night celebration, and ran through February. In conjunction with the exhibit, there were quilting demonstrations, three gospel brunches, a quilt lecture, and a staged reading of For Colored Girls Who Have Considered Suicide when the Rainbow is Enuf. Except for a $25 fee for the brunches, everything was free.

. . .
Say What? – a spoken word experience showcasing local poets, visual artists that use words in their work, and musicians and dancers exploring the rhythm of words.

Midtown Through Our Eyes – a photo exhibit by students from Melrose Elementary and John Hopkins Middle schools, now an annual event, made its debut. For three weeks students explore Midtown St. Pete, their neighborhood, and chronicle that journey through photos and words.
. . .

And that was just the first year. More, lots more, to come.

That first year The Studio received it first grant – $5,000 from The Community Foundation of Greater St. Petersburg. The award supported two upcoming programs – a three-week film noir series, celebrating a genre from the late 1940s and the 1950s, and the launch of another long lost art – a program of radio dramas. For the latter, six professional writers commissioned by The Studio were to be joined by six student writers from South St. Pete schools, Melrose Elementary, John Hopkins Middle and Southside Fundamental. The dramas were to be performed in front of an audience with musicians doing the sound effects.

That project eventually morphed into The Radio Theatre Project (also known as RTP Live!), one of the most popular ongoing offerings at The Studio. Starting in 2009, performances of classic and homegrown radio plays were recorded in front of an audience, with foley artist Matt Cowley supplying the sound effects and a host of area stage, screen and film actors. From the start, American Sign Language interpreter Carol Downing made the audio performances accessible.
. . .

. . .
Now every year there is literally something for everyone – Yoga Flow with Annica Keeler; a summer camp for children; a Social Justice Round-Table series; SPOK: the Socratic Pursuit of Knowledge discussions; Poetry Open Mic and a monthly book club hosted by Keep St. Pete Lit; and a Literary Open Mic hosted by Wordier Than Thou.

Some events have inspired spinoffs. Shopizaar, for example, which was held for the first time last May, is the latest in a series of one-day market events organized by the St. Pete Craft Heroes, a group led by Coralette Damme whose mission is to protect the “burg from stale, boring crafts.”
Offering a market of crafts and local books, Shopizaar followed in the tradition of Halloween-centric Hauntizaar, a Halloween-centric crafts fair, and Holizaar, which offers craft gifts for the holidays. Damme, aka The Crafty Hag, is The Studio’s longtime marketing and administrative director.

The Studio Honors is an annual awards ceremony that recognizes people who have given back to the community.
. . . . . .
Jones is famous for saying, “The answer is always yes,” which has become The Studio’s iconic trademark. But there was at least one time when he said no, he admits. “Everyone is welcome to express themselves here — we even hosted Uhuru,” says Jones, referring to the African People’s Socialist Party, a movement which describes itself as fighting “courageously for justice for African victims of police brutality and defends the right of African people to resist colonial oppression” on its website. But when Uhuru wanted to put up a poster in the front window at The Studio showing people aiming guns at the police, Jones said no. “They could say what they wanted in the space,” Jones explains, “but we weren’t going to let them put up an anti-police poster in the window.”

Over the years The Studio has hosted some famous names — comedian Dick Gregory, historian John Hope Franklin and Russian poet Yevgeny Yevtushenko — but saying yes to young artists and performers just getting started is more what makes The Studio so unique.

The space has been an incubator — and a launching pad — for an impressive list of people, groups and projects including freeFall Theatre Company, Your Real Stories Productions, the Sunscreen Film Festival, the film Waiting on Mary, Tombolo Books, Black Horse Theatre and Bijoux Bios. The latter is a book project that I am working on with fellow writer Jaye Ann Terry, inviting people to tell us the story of a piece of jewelry that carries special memories for them.
. . .

. . .
Full disclosure. In addition to our Bijoux Bios Launch Party at The Studio, I have taken part in three other events there over the past 18 years. In 2009 I organized a panel discussion entitled “Late-Bloomers: The Benefits of Writing as We Age” to present Post Scripts: A Writing Life After 80, a collection of newspaper articles by my mother LaVerne Hammond published posthumously. I made my radio acting debut in one of the radio dramas performed for the Radio Theater Project (typecast as “The Journalist,” of course!). I also was one of the readers at the launch of a website called The City of Writers created by St. Petersburg’s then-poet laureate Peter Meinke and a team of local authors. Reading that night alongside me was Aleshea Harris who went on to win an Obie in 2018 for her play Is God Is..

While the downtown world just outside The Studio’s doors has changed considerably in the past 18 years, not much has changed inside The Studio. Events there still carry a spirit that makes everyone feel welcome — and invariably there still is something good to eat. The staff has stayed small, currently counting three – Jones, managing director Marcus Wehby and marketing and administrative director Coralette Damme – continuing to be aided, of course, by that impressive posse of volunteers.

Jones’ trademark “the answer is always yes” has stuck. Jones explains he coined the phrase after someone at Bank of America who was presenting a county or city grant described The Studio as a “yes in the community.”

Dreams matter, he adds. “And The Studio’s main mission is to fulfill them.”
. . .