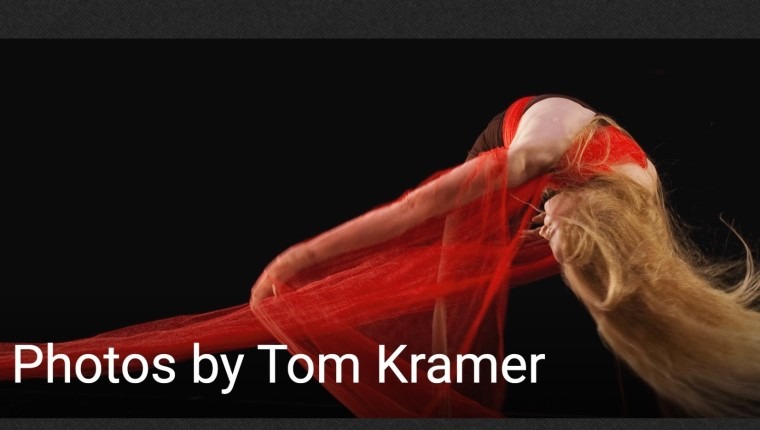 Born in Cleveland in 1934 to Marian and Elmer Kramer, he married dancer/choreographer Paula in 1954 and together they pursued longtime careers in dance and photography.
. . .

. . .
Married for close to 68 years, the couple raised three children and supported each other through Tom’s stint with the Army, his graduation from Ohio University, and his successful careers as salesman for an import business, certified financial planner, and as a pre-eminent photographer of dance and the performing arts.

Tom came to his love of photography early, cleaning out a coal bin in his parents’ basement to make a darkroom when he was 12 – but discovered his love for modern dance later on, in his 30s, when Paula took him to see the renowned José Limón Dance Company in Detroit, where the Kramers moved in 1962.

Tom Kramer was featured on WEDU’s Arts Plus program this year,
working with dancers including Helen Hansen French and John Parks
on adventurous new projects photographed at The Palladium.
The program was syndicated nationally on PBS.
. . .
. . .
Now that she and Tom had three young children, Paula raised the possibility that she’d like to pursue her own interest in dance, and Tom, after watching in rapt silence as the Limón company performed, told her she absolutely should. Paula attended Wayne State University and went on to found the Detroit Dance Collective, now in their 43rd season of performance and arts education.

. . .
After the couple retired to St. Petersburg in 2001 their formidable talents made them a force in the Tampa Bay dance community. Tom photographed for many professional and university dance companies in the Tampa Bay area and Detroit, as well as iconic solo artists representing well-known international dance companies. For the last eight years his stunning images of BEACON at the Palladium played an important role in establishing the series’ public profile.

Tom never took payment for these photos – his love of dance and dancers was paramount. He was above all a collaborator. “I’m photographing for the dancers and the company, trying to come up with material that they can use to promote their art form,” he told the St. Pete Catalyst in 2019. “That’s what I do it for – the fact that some of the pictures happen to turn out rather well, and people choose to exhibit them, that’s very nice.”

Tom Kramer’s pictures were singularly recognized as capturing the dynamics of bodies in motion. His work has been exhibited at Leepa-Rattner Museum of Art, The Studio@620 and The Gallery at Creative Pinellas, and is in the permanent collections of the Museum of Fine Arts, the Leepa-Rattner Museum, the Walter Reuther Archives, Wayne State University and many private collectors.
. . .

You can read dancer Helen French’s thoughts
on collaborating with Tom Kramer here. . . .
At an age when most artists are doing retrospectives, Tom was working on two exhibitions of adventurous never-before-seen work for the Leepa-Rattner and the Morean Arts Center at the time of his death. Both were intended to support his beloved BEACON dancers, and will take place in 2023.
. . .

You can hear a lively conversation with Tom and Paula Kramer
on Arts In, the Creative Pinellas podcast

. . .
Tom was a member of Temple Beth-El, many arts organizations and a longtime Hospice volunteer.

In lieu of flowers, the family requests donations to Creative Clay or Empath Hospice.
. . .