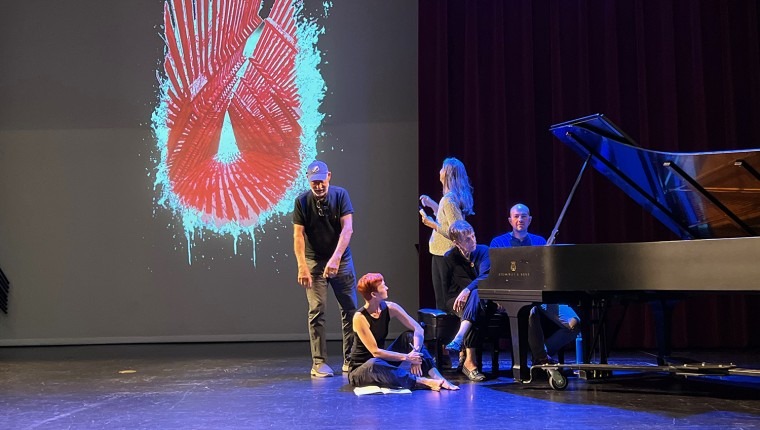 Collaboration with a Heart

. . .
One morning, soon after Robert Stackhouse and I agreed to collaborate on View from a Hummingbird Heart, I woke up and said, “I know what we can do.” Just like that. I had seen it in a dream. or was it one of my early morning visions. Just like that. For me, early morning waking up is a fertile time for creativity.

Robert and I had enthusiastically agreed to work with choreographer Paula Kramer, premier dancer Helen Hansen French, musician and composer John O’Leary III and photographer Tom Kramer. It does take a village. This would be for BEACON 2022, the yearly contemporary dance celebration produced by Helen French and Lauren Slone at the Palladium Theater in St. Petersburg.
. . .

. . .
At first, Robert and I were stymied. There were clearly restrictions on what we could do as visual artists. Since there would be other performers, we could not build an installation onstage unless it could be installed and removed quickly or successfully hidden. None of these options were reasonable given the time and the budget. We are always mindful that even ART has practical constraints.

The reason we so quickly agreed to work with Paula Kramer and company is because Robert and I love collaboration. After all, we are a collaborative team. We understand that there are challenges to collaboration, but the possibilities, when you have a team, are enormous. We always say that working together has pushed both of us past our boundaries. We would never have done alone what we have been able to do together. This does not mean that we would not have done exemplary or worthy work on our own, but it would have been different. There is an excitement and breadth in shared endeavors.

So, how do collaborations work. The key is trust and respect. One has to respect the other’s ability and trust that that each person will do their job. It’s as simple and as difficult as that.

Those of us collaborating on View from a Hummingbird Heart are a congenial bunch. All of us are good at what we do and have, in some fashion, known and worked with each other before. But this is the first time we have all started out from the beginning of a project working together. This is what I would call a true collaboration. Each of us is doing their part but, at the same time, adding our voices to the evolution of the production.

John O’Leary speaks through the piano. He improvises on the theme. He plays snippets from well-known songs to segue to a new start. He also creates silence to remind us all to take a breath.

Helen French communications with the movement of her body but also through her sharp mind which shows both understanding of others and her command of clear language to express her path.
. . .

. . .
Robert Stackhouse is one of few words, but those that get voiced are always right on and to the point. When he speaks, we listen.

I tend to look for the meaning of it all. How do all the parts relate? What is Helen’s relationship with the image, with the music, with John who is onstage with her?

We have Tom Kramer’s keen eye that documents what occurs onstage and off. And technical and production support from St. Cate’s Thaddeus Root and the Palladium’s Christopher Spatafora.

And, finally, Paula. She listens, she watches, she plays the music with her inner ear and sees the dance with her inner vision. We all give Paula the final say not because she knows better than us but because she is the choreographer, and this piece began with her idea. Our collaboration’s structure allows her that final say. We are all willing to do this because we trust her experience and judgement. We trust her to give our work and our voices respect. We trust Paula’s talent, vision and sense of responsibility.

Here’s the thing that is extraordinary about this performance. It is being created by a collaborative team, but the whole performance is itself collaborative. I did not at first realize this, but during our second rehearsal at the Palladium it hit me like a glorious ton of bricks.

. . .
Perhaps that’s the struggle within the performance. Helen’s movements show us clearly that there is a search and a panic because the heart is fragmented. During the dance, Helen’s heart becomes aware of her fragmented self and slowly finds a way to unify the heart’s voice as rendered by John’s music, with the heart’s vision as rendered by Robert and my image – and with her body and physical presence in the world, as rendered by Paula’s choreography and Helen’s keen talent.

At the end of the performance, as Helen slowly moves forward out of the image accompanied by the grounding basso notes from the piano, I challenge you not to feel the joy of peace. I, for one, felt the chills from emerging out of a deep dive into the self to that glorious first reassuring gasp of fresh air.
. . .

You don’t want to miss View from a Hummingbird Heart and the other four stellar dance performances in BEACON 2022, including work by projectALCHEMY with James Curran and REVolutions Dance, uniting performers with and without disabilities through movement, creativity and artistry.

You can witness it all on Friday, April 29 at 8 pm at the Palladium, 253 5th Avenue N, St. Petersburg. Ticket information is at beaconstpete.com.
. . . 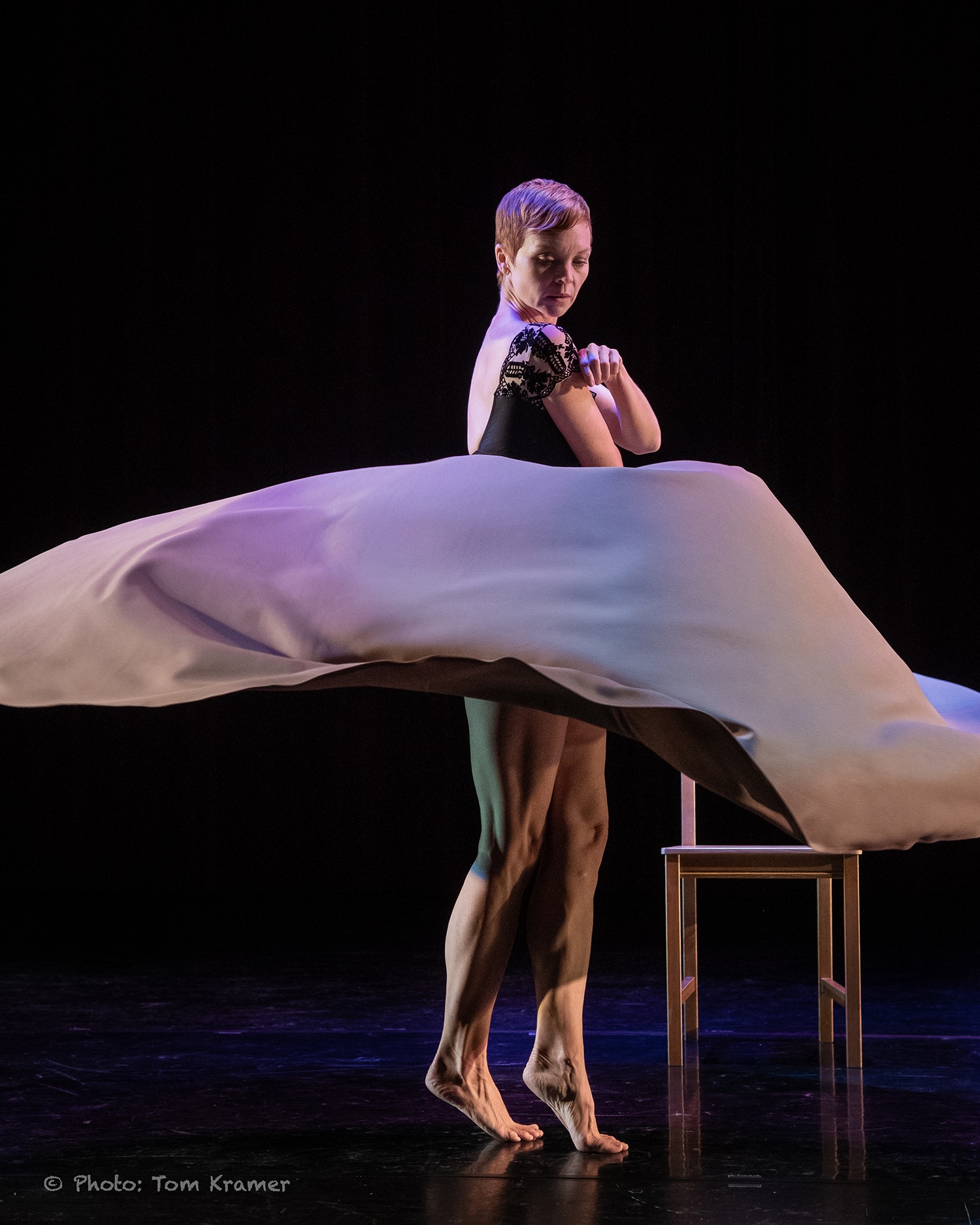