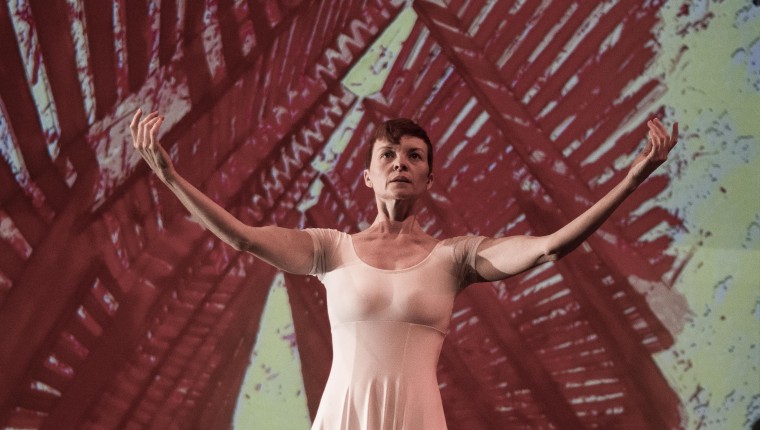 The heart (and the art) of dance collabs

. . .
Collaboration is a key word for BEACON, the annual concert of contemporary dance at The Palladium. The 2022 edition on April 29 was no exception, with partnerships not just among dancers and choreographers but with a jazz pianist, a composer of electronic music, two laptops, two visual artists and even the audience.

Partnering is of course a key component of dance, from classical ballet to movement improv. But I can’t recall a more visceral, moving instance of partnering – in all senses of the word — than I saw (and felt) in Caleb Parker’s Broken Witnesses.

In a performance both technically superb and emotionally searing, Parker and Deion Walker limned the dangers and the anguish confronting young African American men (and all of us, for that matter), but also allowed for the potential of rescue — rescue that lies in the care and respect afforded by a friend, a lover, a brother.
. . . . . .
Alexander Jones’s SHIFT(ed) — danced by Jones, Carissa Bishop, Heidi Brewer, Fernando Chonqui, Esophia Higgins-Wilkins, Kirsten Standridge and Evan Smith — was similarly in tune with the zeitgeist, capturing through movement the seismic shifts we are undergoing as a culture on what seems like a daily basis. (I will not soon forget Jones’s stunning progression of runs and sudden stops, a physical embodiment of both desperation and fortitude.)

Throughout the piece, the electronic musicmeister known as –minusminus was upstage center, sitting at his laptop and providing sounds and music both pre-scored and improvised with the dancers.
. . .

. . .
The collaborations that unfolded in Christina Acosta’s Perky, Quirky, Smirky were as light-hearted as the title. There was a marvelous sense of play throughout, with Baker, Zoë Gallon, Julianna Mazza and Dwayne Scheuneman of REVolutions Dance finding increasingly inventive combinations, including complex moves with Scheuneman, who may be in a wheelchair but is hardly wheelchair-bound. The vibe overall was deliciously zany – even the dancers’ faces danced.

In MOVE 2 – Listen, Look, videographer Sharon McCaman invited the audience to partner up with an onscreen music playlist, projected from her onstage laptop. We gradually got the hang of what was going on. As she presented a series of videos capturing dances sans music by Erin Celeste Grace, Heidi Brewer, Helen Hansen French, Jessica Obiedzinski and McCaman herself, we got to yell out selections from the songs we saw on her playlist — and realized that we could see differing nuances in the dances depending on what songs they were paired with. (Thankfully, no one yelled out for “Brown-Eyed Girl.”)
. . . . . .
The most stunning collaboration of the evening — View from a Hummingbird Heart, a reimagining of an earlier work by Paula Kramer and choreographed by Kramer with Helen French — seemed at first to be somewhat out of balance. French and the pianist John C. O’Leary III (of La Lucha fame) were exquisitely in sync – they began almost as one, French sitting next to O’Leary at the piano and gradually taking the entire stage, the music both informing and informed by her movement.

But what was that smallish red image projected on the backdrop? How did it fit in? . . .
The projection was an image by the artist team of Carol Mickett and Robert Stackhouse called Ruby’s Heart. I had heard they were going to be part of this piece and had assumed that, because French had danced and interacted with the monumental installation in the team’s Expanding Waters exhibit at Creative Pinellas, we would again see her weaving in and out of a Mickett-Stackhouse 3-D creation.

But as anyone who saw that show knows, the two artists also create equally evocative paintings and drawings, and as the projection of Ruby’s Heart grew and grew in size, it was as much if not more of a presence as any structure might have been, and eventually came to be the literal and figurative heart of the piece.
. . . . . .
French, as beautifully precise and expressive as ever, captured all those interpretations and more in movement sensitively echoed by O’Leary — culminating in a final image of outstretched arms before the heart, now almost overwhelming in size, that was at once a gesture of triumph and surrender. . . your choice, she seemed to say.
. . . . . .
Like just about every other fan, I was left wanting more, as in “Please, BEACON, don’t make us wait another year (or years)!” But I know I will hold all of these dances in my heart for a very long time.

And fortunately, as you see here, Tom Kramer was present to capture these moments with his matchless talent for photographing dance.
. . .