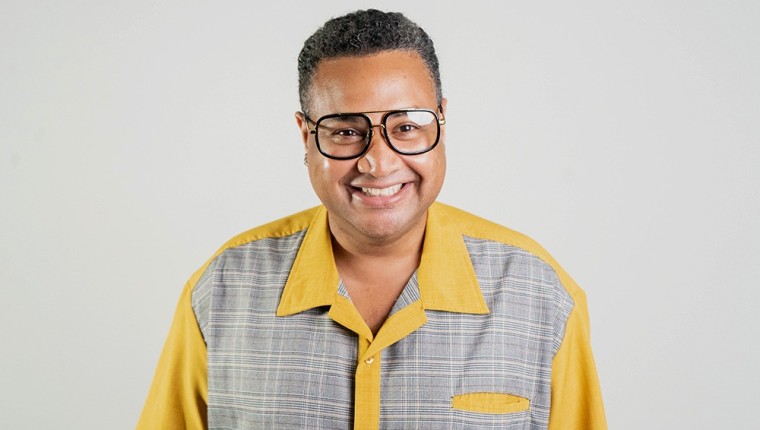 . . .
Yes, it’s true – even in 2021, it’s still groundbreaking when a Black person takes over as artistic director of a major American theatre. But in Florida, it’s even bigger news – because it’s the first time it has happened in the state.

And when the new producing artistic director at St. Pete’s 44-year-old American Stage is as socially and politically engaged as Rajendra Ramoon Maharaj, there’s even more reason to celebrate.

Maharaj, who is highly awarded and recognized as both a director and a playwright, comes with a pedigree that includes recently serving as Assistant Director for the Metropolitan Opera’s production of Terence Blanchard’s Fire Shut Up In My Bones.

Other honors include a Theater Communications Group Directors Grant and Playwriting Grant and being a current finalist for the 2021 Eugene O’Neill National Playwrights Conference.
. . .

. . .
While American Stage assured Maharaj during his vetting process that it was his CV and not his skin-color that was being considered, for Maharaj, the accolades given the one couldn’t be separated from the political, social and spiritual identity bound up in the other.

“I feel very fortunate,” shared the theater artist during a recent conversation. “There is a beautiful wave of change and opportunity happening for BIPOC leadership in the American theater. And I feel very fortunate after going through the vetting process to be in this position.” Maharaj noted that it didn’t fall short on him that he was selected as the first Black person to run a multi-million-dollar Florida theatre.

“There certainly were BIPOC leaders who were more qualified, but for whatever reason didn’t have the opportunity or the access,” he acknowledges. “I stand on their shoulders, and I am excited to create a space that really reflects the best part of America, which I believe is our diversity.”

The creative firebrand also comes with a degree in law, with time spent as a vice-president for the NAACP in Brooklyn, where he was founding chairman for its Equity in the Arts and Culture Committee. That commitment to fighting for equity is part of who Maharaj is to his very core – and in transitioning to this theatre, he brings it with him.

Maharaj’s work as a documentary theatre maker started with Little Rock, based on interviews with the nine brave souls who desegregated Central High School in Arkansas in 1957. The project, developed over 13 years, traveled from Arkansas to California, New Jersey and finally New York City – winning acclaim and being called, “viscerally affecting” by the New York Times.

After Little Rock, the documentary theatre maker says he “branched off into telling stories of our people in our time, being unapologetic and having the permission to uphold these stories.” For Maharaj, the work is not just about learning, but also healing, making sure “we never forget their names,” and using the theatre “as a platform to enlighten and teach.”
. . .

. . .
His play The Ballad of Trayvon Martin, which premiered at Philly’s New Freedom Theatre, documented the last seven hours of Trayvon Martin’s life through hip-hop music and modern dance.

“I only tell stories that stir my soul – that speak to my curiosity or my anger, or my dream either realized or dreams deferred,” he notes. “There have been times where stories, particularly by artists, have been whitewashed, to make it comfortable for white audiences to digest.”

Maharaj acknowledges that he has benefited from the legacy of James Baldwin, Amiri Baraka, Malcolm X, Coretta Scott King and Dr. Betty Shabazz. “All of these artists and activists, through their struggle and their sacrifice, opened the door for me to be able to be a little bit more unapologetic in who I am, what I stand for and what I believe.”

So far, he says, he has had healthy debates with American Stage board members, who, shares Maharaj, have been very embracing of his commitment to presenting a theatre season, staff, board of trustees and slate of community partners that reflect the entirety of St. Pete.

Having experience working at Freedom Theatre in economically-strapped North Philly, to create more inclusive offerings, he plans to bring some of what worked there to American Stage. One such program brings free play readings to the community on Monday evenings.

. . .
In casting Michael Burgess, who is Black, in the role of Felix Unger, Maharaj says, “Neil Simon was very direct, that this should be presented in present day New York. In present day in New York, you see Black and white folks coming together, different diversities, folks from the Latinx community.”

While he believes the opportunity didn’t exist when the play was originally produced on Broadway to cast a Black man, the new artist director adds, “Now we have a chance to meet the opportunity of the moment right now in present day, New York.”

Upcoming in 2022, Maharaj will direct a production of Amiri Baraka’s explosive Dutchman – which he sees as a reconjuring of the story of Adam and Eve, through a contemporary Black man and a Caucasian woman. In putting Dutchman onstage – written by Baraka, the foremost leader of the 1960s Black Art Movement – American Stage will cement its commitment to moving Tampa Bay’s theater experience into new brave new territory, with Maharaj at its helm.

The Odd Couple runs at American Stage from October 27 to November 21. For tickets, you can visit americanstage.org/oddcouple.