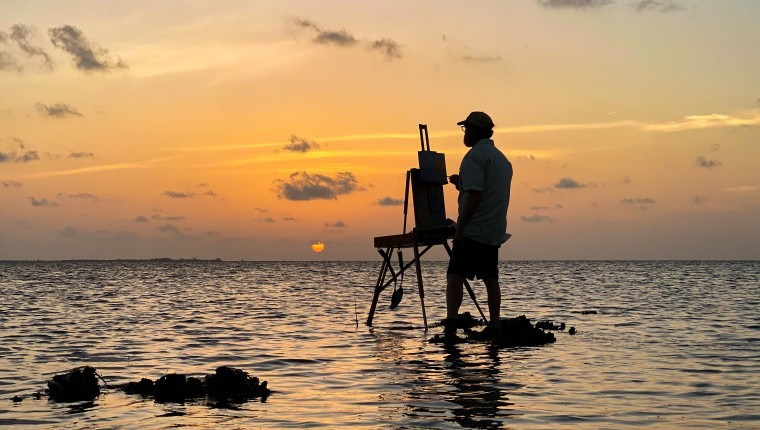 . . .
For more than 10 years, oboist Amy Collins and painter Christopher Still have wanted a piece of music to go along with the murals he painted for the state house chamber, as Artist-in-Residence of the Florida Legislature. Still says he’s never been “attracted to the idea of putting paintings in a room and having people sit around with a bad cheese log in the middle of the room and think they’re supposed to feel something.”

He says at times, he has underwritten theatrical works to be performed with his visual art and many times, “Amy has helped me with either music scores for videos or actually performed at openings.”
. . .

. . .
Collins and Still have been talking about how there “needed to be music, kind of a new Florida Suite (a famous 19th century work by British composer Frederick Delius, written after he’d spent time near Jacksonville), that would touch on the sounds of the state, and brings together the two mediums of painting and music,” Still says.

He said it was Collins who reached out to composer Alyssa Morris from Kansas State University. She has written music inspired by paintings before. And this Sunday, Morris’s Florida Miniatures will have its world premiere at the University of South Florida Barness Recital Hall. The work is based on some of the ten murals Still painted in the Florida House Chamber.

The work’s five movements are named for the five paintings that inspired them, including In Ages Past, A New Age, and The Okeehumkee on the Oklawaha, which features a massive alligator almost coming out of the frame.
. . .

. . .
There’s no opportunity to sample the music prior to Sunday’s presentation, but we can glean some hints about Florida Miniatures from Morris’ program notes:

“The fourth character piece, On the Oklawaha, is based on Christopher Still’s dark, misty, swampy mural titled The Okeehumkee on the Oklawaha. The listener is transported to the dark waters of the Oklawaha river. An alligator silently waits as a small steamboat passes along the river, through the dangling cypress and Spanish moss. The flute and oboe d’amore paint the scene, singing a slow, bluesy lament.”

Morris was given a free hand to write the music, the only condition was that she must write for oboe and flute, and their auxiliary instruments.

The work was commissioned by Still along with Collins, adjunct oboe professor at USF and Francesca Arnone, the interim flute professor at USF, with the help of grants from USF and the Gobioff Foundation. Collins said the grants don’t cover the entire commission, but the three will pay the rest “out of their own pockets,” and it’s worth it, Collins says.
. . .

. . .
Florida Miniatures will be performed by Collins and Arnone, appearing as Amici Musicale, after they talk about musical perspectives of the collaboration from the perspective of the performer.

And Still will speak about his creative process and reveal the symbolism of elements in his paintings. He hopes student artists in the audience will be open to what he has to say. “I think being open to influences, not letting influences or things be a threat to your individuality but looking at it as an artist’s vocabulary. Certainly, if you’re a writer, you’re not going to want to disregard all the things written before you,” he says.

Students would be wise to listen well. Because Still is the rare artist who can pursue his passion for art, full-time. He credits his parents, teachers and community for helping him along the way.

In 2010, Still became the youngest person to be inducted into the Florida Artists Hall of Fame.
. . .

. . .
He says he’s proud to be a Floridian and hopes his art shows people how much he loves this state. And he praises Collins, who’s been his friend since they met at Dunedin High, in the Highland Band. “I’m amazed by Amy, she loves her craft like I love mine.”

Collins says the most exciting part of their latest endeavor is the opportunity to work with Still and the fact that this will fulfill their long dream of having new music written about Florida.
. . .

The Chamber Murals: Florida Arts for All performance is Sunday, April 10 at 7:30 pm at Barness Recital Hall at the USF School of Music in Tampa. You can reserve free tickets here.

You can view Still’s murals in the
Florida House of Representatives here
. . .