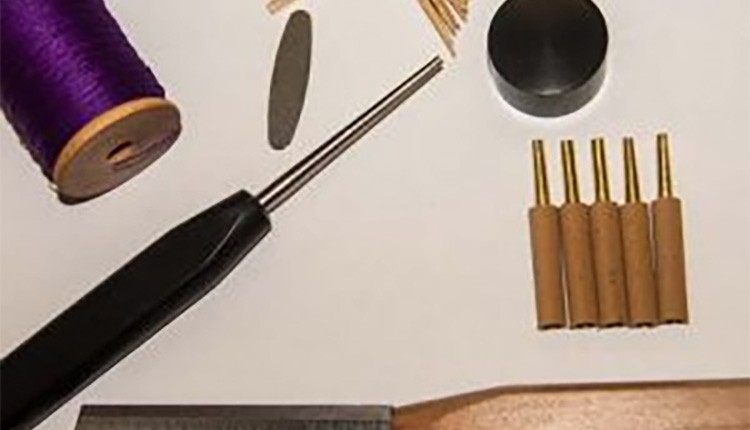 Tarpon Springs Oboist Plays on the Need for Reed

. . .
You can hear an audio version of this story, with music, here

Not the automotive kind, but in the musical sense. Most every time she plays in an orchestra, she’s the first to make a sound, and it brings everyone into harmony.

As a professional oboist, Collins begins each concert with a piercing A note from her woodwind, and all the musicians respond to her pitch as they synchronize for the show.

“It’s part of the job,’’ Collins says about the responsibility of jumpstarting an orchestra. “But I get no glory. All that goes to the concertmaster, who asks me to play an A.’’

. . .
Collins will be playing a lot of A’s and other notes during Arts Annual Weekend November 13-14, a fundraiser for Creative Pinellas – which publishes the online magazine you’re reading. Along with pianist Gerald Steichen, she will perform works by Satie, Gershwin, Morricone and others on Sunday afternoon.

The event includes music, dance, poetry, food, live painters and a gallery exhibition with more than 100 pieces on display – and available for sale.

It’s part of a life in musical motion. An adjunct professor of oboe at the University of South Florida, Collins also serves on the faculty of Hillsborough Community College, Florida College, Eckerd College and the Pinellas County Center for the Arts at Gibbs High School.

For the last 20 years, she’s been principal oboist for Opera Tampa at the Straz Center, where she plays for touring Broadway productions. She has freelanced in concerts featuring such stars as Luciano Pavarotti, Andrea Bocelli, Tony Bennett and Diana Ross.
. . .

. . .
Then COVID hit, putting the kibosh on performances – and the critical act of teaching. Not wanting to hit a sour note, she found opportunity in technology.

“Zoom has been a true blessing for me,’’ she says about working from home. “It’s actually enhanced what I do because I can teach anybody from anywhere – I’ve had students reach out to me from out of state. And with Zoom, I don’t have to get dressed up to teach.’’

But Collins does more than play and share her knowledge. She serves as a conduit to the temperamental world of the oboe – among the most demanding of musical instruments – by literally giving it a voice. She makes reeds.

Not just a single reed used by the clarinet, but the double reed that serves as the oboe’s mouthpiece. It requires a specialized bit of wizardry, as oboists must blow a pressurized stream of air through a tiny opening between the two reeds. They hold their breath and release air at a slow, controlled rate, producing sound wholly dependent on the quality of the reed. Oboists are famous for stories about headaches from playing and heartaches from erratic reeds.

“It’s like putting two pieces of grass together and blowing against them,’’ she says of the idiosyncrasy of double reeds. “Oboes are notoriously horrible. I don’t know who came up with this idea, because it’s kind of crazy.’’

So crazy, in fact, that in 1999 Collins founded Stellar Oboe Products, which became the first e-commerce oboe website on the Internet. She sells more than 200 reeds a month, all made by hand in her home.
. . .

. . .
“It’s very eclectic,’’ she says of a customer base that ranges “from beginners to professionals all over the world.’’

Collins makes her reeds from cane, a bamboo-like wood called arundo donax – also known as elephant grass – which grows near vineyards in France, Spain and Portugal. Like the wine from these regions, the cane reflects the soil in which it matures – and inevitably, its tone as a finished reed.

She buys the cane by the pound, and the wood must be carefully scraped to get the “blades’’ to vibrate. Then, the reeds are moistened and dried, and tweaked for intonation and stability. Her reeds sell for between $16 and $50 each.

Reed making, however, is a sensitive subject in the music world – and a hot topic among members of the International Double Reed Society. Oboe reeds are as individual as the person playing them. They fluctuate with humidity. They chip and crack. They must be soaked in water before a performance. Nor do they last – the average professional oboist might get 15 hours of playing time before needing a new mouthpiece.

That’s why oboists are supposed to make their own reeds, and lots of them. But the work is intensive and takes away from practicing and performing. Plus, many commercially made reeds can vary in quality, which can put the performer in artistic peril onstage. Musicians who buy reeds instead of make them often keep mum about their purchases.

“Some oboists don’t want anyone knowing they don’t make their own reeds,’’ she says. “Making and playing on one’s own reeds is a very personal achievement and some oboists that simply buy professional reeds from me feel incomplete or defeated in some way.’’

Collins tests all her reeds for response, resistance and intonation. This means putting them in her mouth and blowing air between the blades. It also means something else – possible contamination that could ruin her on-line business. So, she gives each reed a zap of ultraviolet light and an ultrasonic cleaning.

“Once the pandemic hit, disinfecting my reeds became a priority,’’ she says about her safety protocol. “I play test every reed, so they have to be disinfected. Nobody came to me to tell me to do this – I just think it’s the right thing to do.’’

As an expert reed maker, Collins saves some of the best for herself. Someday, with perseverance and luck, she just might make a flawless one.

“Oboists always search for that perfect reed,’’ she says. “The sound of my perfect reed is big, dark, stable, and with lots of color.’’
. . .

The Arts Annual visual art exhibition
is on display at the Gallery at Creative Pinellas
November 11-December 19. Details here.