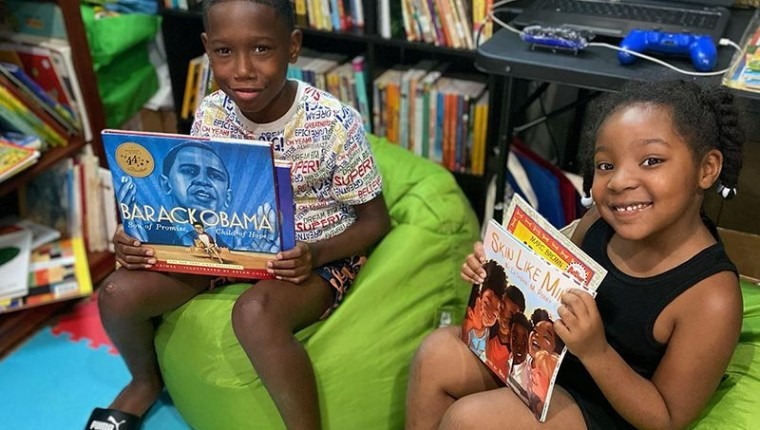 . . .
Barbershops hold an almost mythic quality in the Black community in America and around the world. Classic movies and plays have been set in barbershops; historic images of the past barbershops have made it to the National Museum of African History and Culture. The barbershop has been revered and written about in academic journals, news articles and books. It’s even been written about a source for community health interventions.
. . .

. . .
So, it’s really no surprise to find that one of St. Pete’s own master barbers has continued the legacy of the barbershop as a place of power, and taken it to the next level — a space for growing and impacting youth literacy.

Antonio Brown, owner of Central Station Barbershop & Grooming, located at 2325 Central Ave. in St. Pete, has community-mindedness in his blood. He comes from folks who made a difference, including a grandfather, Charion Brown, who ran recreation centers across the city, and a grandmother, Hermeen Murph, who spread love and care among the many neighborhood children she watched in her home as a babysitter.

Born and raised in St. Pete, Brown’s educational career took him in several different directions. After graduating from The Boca Ciega High School, he started at St. Petersburg College and switched to Pinellas Technical College, where he earned his plumbing certificate while he worked telemarketing jobs.

Eventually, plumbing no longer held his interest, and he decided to pursue the field of barbering. Brown says he had already been prepared by his grandmother to bring something else to the field besides clippers and scissors, though he may not have known it.

“My grandmother used to keep a lot of kids in the neighborhood. I grew up around her — a very loving and giving individual. I didn’t realize what she was instilling in me at the time, but it spilled over into my community endeavors,” Brown acknowledges.

Brown shares that most people who knew him realized he was a “very creative person” and that creativity sparked an un-tried concept: using his skills and place of business as a place of learning.

“Being a barber, you watch children grow up right before your eyes if they stay loyal to you and continue to come back to you as clients. I decided to try to take advantage of a niche that I didn’t see happening in this area.”

Brown says he wanted to “tackle issues that I felt that were important and impactful, that I was passionate about.” He originally started the book club concept in 2016, focusing mainly on trying to help the children who came into the shop.

“I didn’t get a very good response at the time because I really wasn’t trying to get it out into the community as much as I am today. At that time, I was really focused on trying to help the kids, and you know, do something different.”

When COVID-19 hit the community, Brown says he decided it was time to bring it back and relaunch it.  This time it’s been a hit. “I’ve gotten many great comments and feedback – it’s just been amazing.”

Brown holds the book club on Wednesday afternoons from 4-6 p.m. “They (the children) know that they’re coming in and getting books; they know they’re coming into a safe space where reading is okay.”

Treats and a reward may also be on the table if the kiddos come in and read to him. Along with providing free haircuts, he sometimes offers gift cards as well as the books.

While Brown says he doesn’t have any formal training, his methods sound like the kind of high-quality, low-pressure, care-filled instruction that most schools today seem to lack sorely. Most of the children who come in read to Brown while he’s cutting their hair, and at times he will read along with them.

“As they’re reading, if they slip up, or if they have any problem words that they come across, that’s when I interject,” he explains. “They might be reading a story, and a word may come up that they have a problem with the pronunciation. And I help them sound it out.”

Brown says they’ll talk about the context of the sentence and how the word is being used – he may help them look up a definition.

“It’s just little small things, you know, and their parents also pick up on what I’m doing,” he notes. Brown acknowledges that some of his know-how comes from years of dealing with children in the chair, kids who might be afraid and crying when they come in for the first haircut, who may be afraid of clippers, or just overwhelmed at the new experience. That’s when Brown has to sit down with them, put the clippers away, and just talk to them. Learning to ease children and make them feel safe has worked just as well in the Barbershop Book Club.

His compassion and empathy for young boys who struggle is also informed by his own experiences.

“I had peers and friends I grew up with who couldn’t read and were just pushed along in school. That touches me today.”

Brown sauys he tries to find books that will speak culturally to his young clients, so he purchases his shop’s collection from Cultured Books, owned by Lorielle Holloway, which specializes in Black books for children.

“I’m trying to find images that look like them – stories that reflect what they’re going through as inner-city kids.”

Working with the Shirley Proctor Puller Foundation, Junior League of St. Pete, and the Juvenile Welfare Board, Brown helped launch the Community Barbershop Book Club with several other Pinellas barbers.  They have also committed to holding similar book clubs throughout Pinellas.

Now, this St. Pete master barber is hoping that people will help supply these other barbershops with culturally relevant books so that the love of reading and learning in community barbershops grows.

Brown is on fire when he talks about the expansion of his dream and vision, and it’s obvious why that is: “It’s just something that I love to do. And because I’m excited about it, I think the kids are excited about it as well.”

. . .
Originally published in The Weekly Challenger