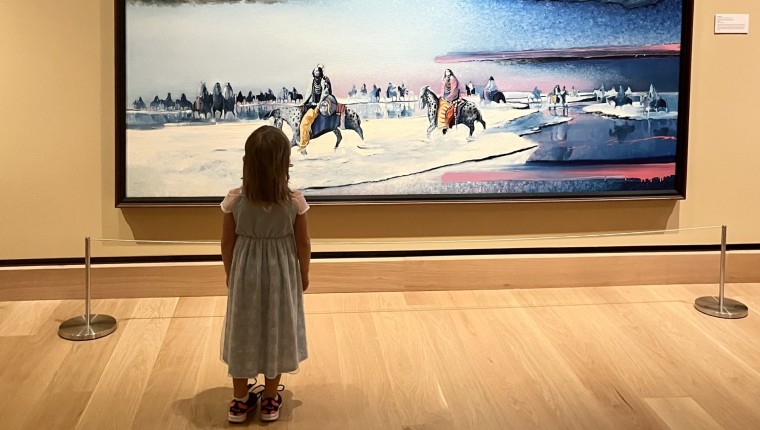 Journey to The James Museum
with Children

. . .
This week we decided to skip the zoo and visit a place where myself and three little ones could marvel at realistic paintings of wildlife. Our decision led us on a journey to The James Museum of Western & Wildlife Art, and what a magnificent journey it turned out to be.

It was Tuesday when the kids and I headed to St. Petersburg. We parked in the conveniently located garage above the museum, made our way down the elevator to the front entrance, bought our tickets and went inside clad with stickers and masks.

I must say The James Museum is stunning. I immediately felt a change of energy entering this building. We forgot about the hustle of the city and felt at ease as we were welcomed by the cascading waterfall and smooth sandstone walls. The interior features and aesthetics evoke canyons and arid creeks. Within this space called the Arroyo, you are transported to the American Southwest.
. . .

. . .
We headed to the second floor. I steered the kids (strollers are allowed, bags must be worn either from the front or on one shoulder) to the Warhol exhibit, here through January 9.

We had planned to capitalize on the opportunity to attend a screen-printing workshop, but unfortunately I did not read the fine print about limited spaces. Although this event is open to all ages, it is probably for the best that I did not take an eager toddler, a 4 3/4, and 6 1/2 year old into the smaller workspace to learn a new skill without additional assistance. So rather than screen printing, I was guided by the children around the permanent collection.
. . .

. . .
Madeline (4 3/4) beelined for a beautiful painting in The Native Artists Gallery. When I asked her what she liked about the painting she said ‘the sky and the Aurora Borealis’. There was one other painting where she admired the Northern Lights. Madeline also really enjoyed a ceramic piece of nuzzling raccoons located in The Wildlife Gallery and resisted the temptation to touch the sculpture.

Like a barracuda or magpie, William (6 1/2) has an affinity for anything shiny, and he led us to The Jewel Box. I found it quite interesting when he remarked he was disappointed that there weren’t any precious stones – he was expecting diamonds, rubies and emeralds, not turquoise and garnets.
. . .

. . .
Much later I thought back on his comment. It made me want to discover more about the amazing history of Native American jewelry – how silver came into the fold, the symbolism behind the materials used, and the ways in which designs embody beliefs and traditions from various First Nations. Thank you William for keeping me engaged.

We did everything backwards because as we turned a corner and came across a screen, all three kids naturally sat down to watch the Intro film, which did not hold their attention for as long as I hoped.
. . . . . .
Lastly we admired realistic oil paintings of wildlife. Animals not only found in North America, but around the world. The experience was as enjoyable as seeing animals at the zoo, and Thomas the toddler was going wild.
. . . . . .
I would like to say that I spent a lot of time admiring all parts of the museum and really got to enjoy the works in earnest, but this time around I didn’t even get the chance to take photos of labels. I suppose it’s a good thing because it’s one more reason to return.