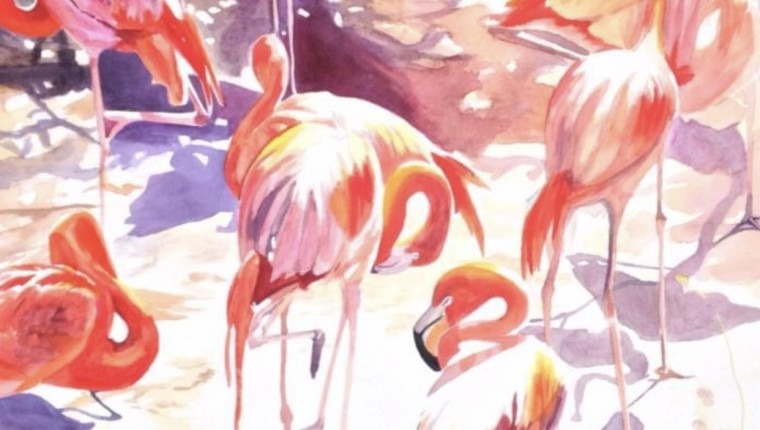 My watercolor, Fabulous Flamingos, has always been a fan favorite. Given that the original is on display at Tampa International Airport as I write this, I thought it would be a great topic to discuss.

Back in 2014, I had a studio at the Ybor Art Colony in Ybor City, Tampa. If you haven’t been there, add it to your list. It’s a charming group of rooms above King Corona Cigars. Once upon a time they were boarding rooms for the cigar rollers. I often felt like I wasn’t alone there and would occasionally smell very strong body odor when no one else was around, in this likely haunted space. Visit my friend and fellow artist Elizabeth Fontaine Barr fontainegallery.com who now occupies Room 2, that was once my studio.

We held open studio tours on a regular basis. The leader of our little group was Princess Simpson Rashid princessrashid.com. I recall her telling me about the Florida Watercolor Society. At one of our openings, a very enthusiastic and esteemed member of the Florida Watercolor Society, Kathy Durdin kathydurdin.com, came to my studio and shared all about it. She encouraged me to enter their annual exhibit. Consequently, I did and the journey began.

I knew I wanted to do something bold and bright. As a matter of fact, I was the chaperone on a class trip to The Lowry Park Zoo the following week. Then, when I saw the flock of flamingos, bursts of orange, red, pink and white, I was captivated. For that reason, I took a LOT of photos of them.

Back in the studio, I tossed the packet of printed photos on my drafting table and began sorting through them. I found the one that inspired me and I laid out the drawing on a big sheet of 22×30 Arches Watercolor Paper and got busy painting.

First, the piece was completed just before the deadline and submitted to the FWS Annual Exhibit. Then, a few weeks later, I learned it was accepted and would be shown at the Cornell Museum of Art in Delray Beach. Finally, I was over the moon to be accepted on the first try. Only 100 pieces are selected by the juror out of 600-1000 entries from the state.

On the night of the opening reception, I was driving around Delray Beach looking for parking and saw a giant banner advertising the exhibit. Moreover, there were my flamingos on the banner! Consequently, I was floored! What a privilege it was to have my art on the banner. As I explored the gallery, teeming with art lovers, I met the curator of the museum. She told me she selected my piece to be on the banner. Then, I asked her if I could have it after the show. Notably, she said yes and I have it in my studio to this day.

In 2017, my painting Let Freedom Ring was juried in by Iain Stewart, and won The Vee Hill Award of Excellence. Last year, juror, Keiko Tanabe selected my painting Sombras de la Calle into the show. For this reason, my third time being accepted into the the the FWS Annual Exhibit, I received the honor of signature membership status.

Most recently, my Fabulous Flamingos are now on display at TIA in the 50 year retrospective www.tampaairport.com/sites/default/master/files/ART-Watercolor-WEB_0.pdf. It always surprises me that no one has scooped up that original painting yet. The original is still available. Visit my website print shop for giclee prints https://www.heatherrippert.com/workszoom/3337994/fabulous-flamingos-giclee-print#/.