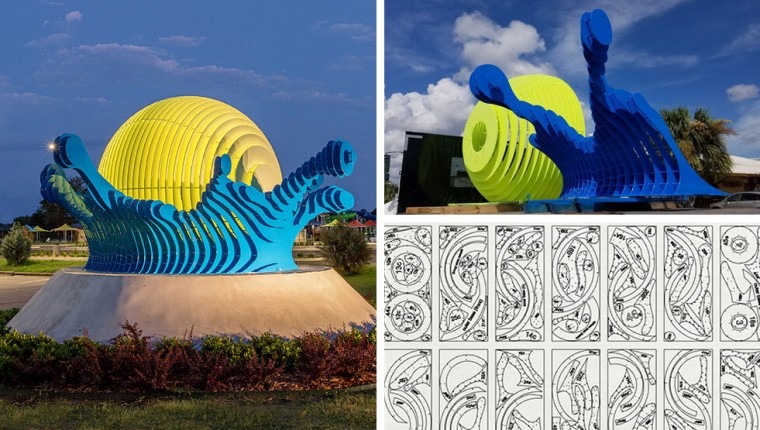 The MGA Sculpture Studio crew was surprisingly small for the scale of the work they did in 2017. When I joined, there was Mark Aeling, the owner; Chris Padow, the shop lead; George Retkes (and former Creative Pinellas Emerging Artist Grantee), fabricator; and Tyler Houston, fabricator. The first project I worked on was an aluminum bird sculpture for The Florida Aquarium.

The work was tedious, but overall everyone was super fun and I could put on headphones and listen to podcasts while I sanded. It felt good to be around creative people, and the projects were large and interesting. After the aquarium project, we started on a piece for an aquatic park in Norman, Oklahoma. The piece was called Splash, and it was a 20’ x 20’ x 12’ tall aluminum sculpture of a ball splashing into water.

Splash was a relatively complex piece compared to what MGA normally did, both in scale and style. It was complicated enough that it required a designer to make it, and Mark hired someone to design it remotely. One Friday, I overhead him and Chris talking about “nesting”, which grabbed my interest (nesting is the automated packing of parts onto sheet material for cutting. Like Tetris). Well, the designer Mark hired had no idea how to nest Splash, which had hundreds of parts and would be impossible to do by hand.

Apparently, Mark had glanced over the part of my resume that said I was an accomplished designer. Chris would later tell me I was pretty much hired because I looked like I could lift heavy things (being 6′ 2″ and athletic build and all) and handle a tool.

But I was also cheaper than finding a new designer, so I was given a chance to do the nesting.

And… I didn’t have the slightest idea how to.

After a weekend of researching and YouTube videos, I had a few ideas on how to do it. Still true to this day, nothing is as hard as engineering school. So, on that Monday, I brought my laptop into the office and Mark came in, unsure of what to expect.

“Ok, this is on a tight deadline, so we need to see something by the end of the day or we have to figure something else out.”

And so it began.

I spent the entire workday nesting (a welcome change from sanding), experimenting with dividing up the pieces into different sizes for different stock sheet sizes, weighing out more efficiently packed sheets vs. welding more pieces together, etc etc. It was all new, but it went swimmingly well. At the end of the day and after a little presentation with Mark, we decided that Splash could be made on 21 sheets of 5’x10’ aluminum plate.

The next day, Mark emailed his metal supplier who would also be doing the cutting, and he sent over my cut sheets. Around lunchtime that day, he got a quote back for the material, but instead of 21 sheets, there were 27 sheets of material. Metal Supplier Calling Mark Back: “Hey, so I have a revised quote for you for 21 sheets of aluminum.”
Mark: …… (unimpressed silence)

I don’t remember the exact number, but I believe the cost difference was about $7,000 in material.

And after that phone call, I was pretty much the designer for MGA Sculpture Studio.

Stay tuned for Part V: The Police Station and the Waterjet