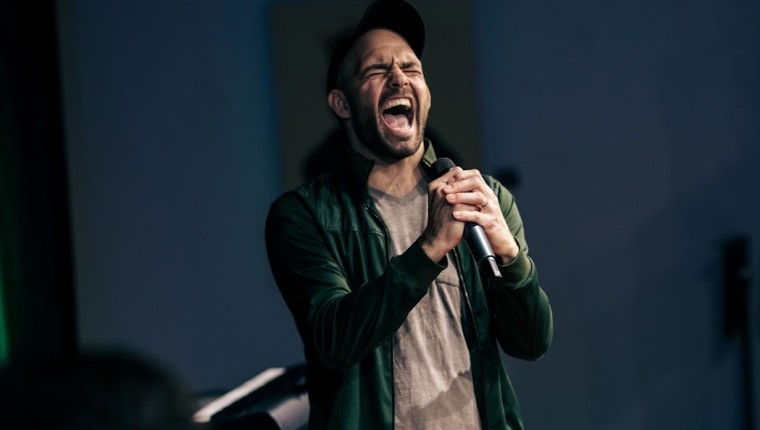 Where the Mic Is Always Hot
for Poets & Storytellers Among its headliners were poet Peter Meinke (who went on to become St. Petersburg poet laureate and then poet laureate of Florida), comedian and poet “ranney” (Ranney Lawrence who went on to perform in every theater in Tampa Bay), poet Julie Buckner Armstrong (still a beloved professor at the USFSP), visual artist Duncan McClellan (who displayed his delineated glass sculptures), saxophonist Oluyemi Thomas (who shares the stage with his poet wife Ijeoma) and the Dundu Dole Urban African Ballet Company (founded in Pinellas County in 1991).

In a 2007 webcast, Dave Ellis and Bob Devin Jones, the co-founders of The Studio@620, talked about how perfectly the two-week long open mic event aligned with their mission to “bring different communities of people together into a neutral and safe space where everyone can share a creative energy.”
. . .

Here’s an edited version of that conversation. . .
. . .
Bob – Describe your favorite show of the last two seasons.

Dave – My favorite show was an event called “Say What?” It focused on poetry and spoken word, but because we wanted to bring different communities of folks together, we also included visual artists who had incorporated text as a tradition in their work.

We brought together dancers who did interpretation of poems. We had photographers. We had poets interpret an image that was thrown on the wall. They had ten seconds to come up with something.

We had workshops for children all the way up to poets emeritus. Fashion as well. It was this wonderful mix of different arts, backgrounds and abilities. For me it was sorta the perfect kind of gathering of people.

Bob – And the name was so great… Say What? Say What! In one word, how would you sum up the event?

Dave – Wow.
. . .
“Say What” only lasted three seasons, but its spirit is alive and well at 620 1st Avenue S. in St. Pete. Last month the space hosted four open mic events where poets and storytellers were invited to step up to a hot mic and perform before a live audience.
. . .

. . .
“Tapping into the Ethereal” combined three of the original elements that made “Say What” so memorable – poetry, art and music. A fundraiser for the Friends of Jack Kerouac to mark the 53rd anniversary of the passing of the dead poet who invented the word Beat, the evening featured poetry readings, an interactive painting demonstration and a jazz band.

There was also a silent auction and a “raffle witch” (aka Monica Drake, the group’s first ever female president). Oh, and free Nitro shots to keep us all awake.

First, the music. The evening began with a jazz program infused with Afro-Cuban rhythms provided by Johnny White and the Xperince, featuring Johnny White on the trumpet, John Jinkins on the drums, Rick Adams on the saxophone and Jake Walker on bass. Later, in true Kerouac coffee house style, the band provided a jazzy backdrop for poets who stepped up to the mic.

Next, the visual art. Throughout the evening James E Hartzell, past president of the Friends of Jack Kerouac, stood at an easel, painting.

As the image on the canvas emerged —  a typewriter topped by a tombstone labeled with Kerouac’s nickname Ti-Jean and the dates of his life on earth, 1922-1969 — he invited the audience to come up and paste poetry on the work, turning it into an interactive collage. The finished painting will be put up for auction at the next FOJK in March 2023.

And, finally, the main event – the poetry. In the spirit of the Halloween season, members of the audience were invited to throw their names into a pumpkin so that Denzel Johnson-Green, a Friends of Jack Kerouac board member and one of the co-hosts for the evening, could pull out the slips of paper at random and invite people to step up to the hot mic to read a poem.

“What is the Dead Poets Society?” Johnson-Green asked us. “It’s a funny question.

“We got all these live poets here tonight, talking about dead poets, past poets, past tense poets, poets once here, poets kinda like air, always around, breathing the same air that the dinosaurs breathed, but new air somehow. Perhaps poetry is like that. Perhaps people are like that. I’m not sure.”

“Why do we read dead poets?” Johnson-Green asked the audience. “Because there’s more of them,” an audience member shouted. “To bring them back,” added another.

And the soulful readings of poems of dead poets, from Walt Whitman to Maya Angelou, nearly did just that.

Not all of the poems read though were by dead poets. My favorite of the evening, in fact, was by the still very much alive Assata Shakur, an American political fugitive who has lived in Cuba since breaking out of a U.S prison in 1979. Donnie Ibn Malik Ali-McClendon, the other co-host of the evening (and my nephew) recited Shakur’s poem called “Affirmation.”

“And, if i know anything at all
it’s that a wall is just a wall
and nothing more at all.
It can be broken down.”

. . .
The breaking down of walls, it seems to me, is exactly what happens at open mic events. By blurring the line between organizers and audience, between poets and poetry readers, between storytellers and lovers of stories, these events create a space where everyone is welcome to step up and perform or just sit back and listen.

And all the open mic events held at Studio@620 last month did just that.