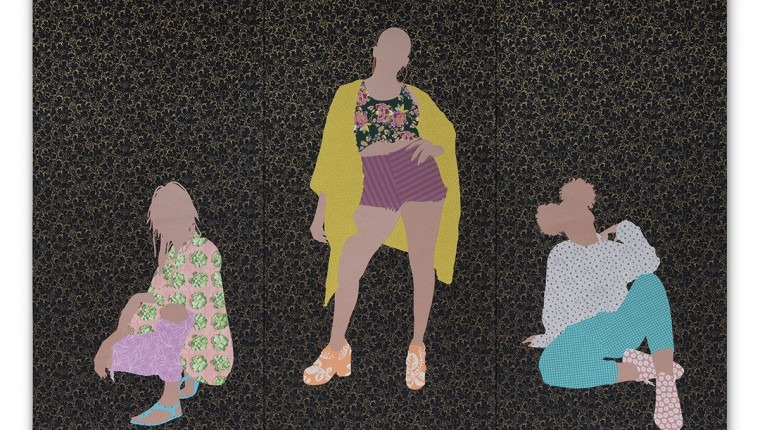 . . .
Gio Swaby’s stunning exhibit, Fresh Up, has been running at the Museum of Fine Arts St Pete since the end of May.  The color human-sized tapestries-on-canvas created by the Bahamian artist (b. 1991) will be up on the MFA walls through October 9, so you still have time to see her “love letters to Black women” as she has called them.

In her first solo museum exhibition of more than 40 works, Swaby’s show was co-organized with the Art Institute of Chicago, where it opens in 2023. Fresh Up is a Bahamian term expressing the energy a woman feels when she’s dressed up and looking her best.

. . .
The show features work spanning 2017 through 2021. Swaby’s creations are birthed out of her childhood, where she grew up bathed in the creative influence of her mother, who was a seamstress.

In a process that includes using a “sitter” she photographs before transferring the silhouette to her magical canvases and adorning them in brightly colored textiles and threads, Swaby’s pantheon of female figures feel at once like goddesses and warriors, while also reminding us of beloved dollies from our childhoods.

. . .
In an interview with the MFA, Swaby notes, “I want to create portraits that are full of the essence of that person and who they are and be able to do that in a way that’s delicate, that holds so much respect and reverence and love for the person being represented.” The artist has written comments for many of the works and has likened the process to writing “love letters” to Black women.

. . .
In her interview with Nikole Hannah-Jones for the exhibition catalogue, Swaby states, “I would describe my work first and foremost as an act of love.”  She adds that the processes of creating the canvases “are not necessarily the work itself. The work is more making connections and growing love. Those portraits are like a dedication to that work, or a residue of that work.”

. . .
Moving through the exhibition feels like returning to a pre-lingual state of imagination and possibility – through her larger-than-life representations we are reminded of the mystery of “growing into” womanhood while guided by the unspoken, carefully protected gifts of creation from our feminine guides.
. . . . . .
Swaby’s work has been accompanied by a possibly before-unseen level of ‘St. Pete Black Girl Magic and Events.” Another success for this phenomenal show – the level of communal and individual (for those of us who went alone) joy that has accompanied its giant multi-colored silhouettes depicting Black women the artist loves and pays tribute to.

Images of women accompanied by daughters, homegirls and sista-groups have popped up on social media feeds throughout the show, while the museum’s own marketing events – including a sold-out Bahamian-themed dance party at the MFA, an opportunity for women of all races to join in celebration of the glee, beauty and spiritual power of being female – emphasized the celebratory aspect of the show.

. . .
“I was absolutely blown away by its beauty and loved seeing myself represented,” shares Hillary Van Dyke of Green Book of Tampa Bay. The Green Book held its September 8 business mixer at the Gio Swaby exhibit, with a plethora of African American entrepreneurs, artists and business folks reflecting in and sharing the uplifting, playful communion inspired by the celebratory works.
. . . . . .
Shundra Allison, creator of The Burg Cares and Power Plug Radio co-founder asserts, “It was amazing expression of loving your own unique beauty.” Alexis Holland of Living By Intention adds, “To be in a room that big (in the south!) and see nothing but us on the wall was so much more than a display. . . it was deeply healing.”

. . .
Chiming in from the male perspective, Community Tampa Bay’s Eric Vaughn comments that the show “. . . not only invites Black women into the Art conversation but welcomes and embraces them.”
. . . . . .
The Woodson Museum’s director Terri Lipsey Scott sums up the general acclaim for Swaby’s work simply – “Gio is a phenom whose talents will be forever celebrated.”