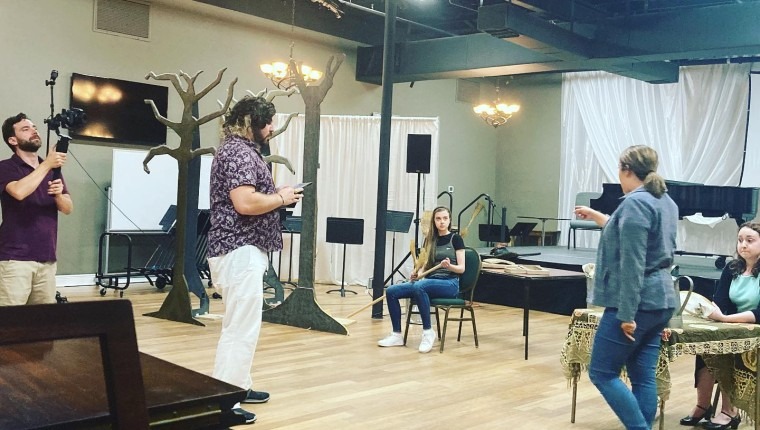 It’s show week for the production of Broadway Bound and I’m very excited! The cast and crew have been hard at work with preparation and final steps and everything is coming together nicely. Our final dress will be this Wednesday and opening will be Thursday. HURRAY!

Therefore, I wanted to touch upon the idea of acting etiquette, both in live performance and in film. I cannot STRESS enough how important and crucial proper etiquette is in actual performance, as well as getting rehired- that’s the end goal, honestly. From my own experience, I’ve compiled a few common etiquette guidelines that can be used in performance prep, rehearsal and show. I’ll begin with live/play performance etiquette. One of my first blogs was about “preparation,” so I’ll skip that procedure for now and move toward etiquette in rehearsals and show week. Firstly, it is imperative that an actor arrives at rehearsal knowing their lines (at least) and having a solid idea of characterization-i.e. Knowing the character’s ultimate objective, their inner conflict, goals, etc. I will admit, I’ve fallen victim to not being completely off-book, but I try to maintain that as the overall goal. Furthermore, the closer you are to being off-book, the smoother and more efficient the rehearsal will go; Remember, time is money (we’ll touch on this more for film!). Also, not all directors will be as forgiving as some, when it comes to preparedness. You are responsible for what you can control!

Once rehearsals begin, the control shifts to Director and Stage Manager (plus ASM), set designer, costume department and props. They are responsible for creating the big picture of the story being told. You need to allow them to do that, and not let faulty decisions, like not knowing lines, hold up growth and forward motion in the process. Additionally, NEVER, under any circumstances, give another actor notes or blocking, as it’s rude, reductive and inappropriate. That’s the director’s job; it’s another sure-fire way to NOT get rehired.

As rehearsals progress, an actor must adhere to blocking and remember it by writing it down. Blocking isn’t only meant for you, it’s meant to help other actors AND the audience, through sight-lines, placement, pathways, etc. An actor must ALWAYS remember that a performance is a collaboration; a movement on-stage may help or hinder yourself or another actor. You SHARE the stage, so it’s respectful to allow other actors to perform and present their characters. The incessant “Schmacting” and “scene-stealing” behavior is immensely amateurish (a tool used by a lot of inexperienced actors) and draws attention and focus away from pertinent scenes of your fellow actors. It’s also a disservice to the audience, as they may miss certain information because of the gratuitous distraction of another actor, that ultimately doesn’t move the plot along. Another aspect to add to rehearsals is the use of props and articles of clothing that you handle through-out your scenes (if available) or using items that mimic the props to get a better idea. If you wait until dress rehearsal to use props, you will most certainly run into issues. Furthermore, if available, practice in your show shoes during rehearsal. These can change your posture, gait, etc. I’ve had many experiences working and rehearsing in my show shoes for opera and it’s immensely beneficial. Take the guessing and the work out of being a performer, by setting yourself up for success and ease.

Show week (or tech week, depending on budget or set-up) is crucial and requires all appropriate hands on deck! This is the time to polish and solidify your intentions as an actor, plus settle into the blocking and character relationships. Again, this is NOT the time to still be fumbling with lines. You should rarely, if at all, be calling for lines.  It’s extremely disrespectful at this stage, as it shows you ultimately don’t care about the production or the patrons that will eventually pay money to see the performance. Lack of prep is also hurtful to the other actors, who are trying to maintain their characters and are invested in performing the material.

For example, I’ve experienced situations where actors don’t know their lines and I’m performing a challenging scene. When they forgot and called the line, that pulled me out of the moment, which isn’t really fair. Furthermore, I’ve seen actors cram lines right up until show and choke, because the added element of an audience can cause a panic and subsequently,  forgetfulness. Ultimately, challenge yourself to work your way out of the text if you run into trouble—I’ve done this numerous times; in fact, I’ve had to do this knowing my material, as other unprepared actors skip pages of dialogue….It’s a legitimate skill to know how to improvise. But, hopefully you won’t have to unless you are formally doing Improv or in a safe environment that welcomes experimentation. Overall, I’m sure there are many more nuances to show etiquette, but I wanted to cover the most basic. Actors of any skill level can maintain proper etiquette and respectfully  support a production through-out the creative process. An actor always has the power to control their contribution. When all is said and done, always remember to be patient and BREATH!