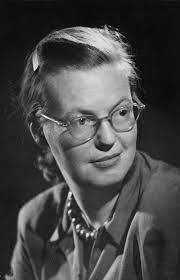 “First they tell you lies and they make you believe them. Then they give you a little of what they promised, just a little, enough to keep you thinking you’ve got your hands on it. Then you find out that you’re tricked, just like everyone else, just like everyone, and instead of being different and powerful and giving the orders, you’ve been tricked just like everyone else. You once wrote me a letter … telling me that I would never be lonely again. I think that was the first, the most dreadful, lie you ever told me.” (Shirley Jackson)

Author Shirley Jackson was author of chilling stories like The Haunting Of Hill House and The Lottery. The above quote of Jackson‘s is from my play, In The Castle, We Lived (a play on the title of her novel We Have Always Lived In The Castle). It is set on the final night of Jackson’s life as she struggles to finish what she believes will be her life’s  greatest work- a ghost story that tells the truth about her own haunted life- her crippling relationship with her mother (she could never satisfy her mother’s expectations), sexual abuse by an uncle, an emotionally violent marriage to Stanley Edgar Hyman, and the alcoholism that killed both of them .

All her life, Shirley Jackson felt alienated and emotionally starved. She never felt she could trust people. False promises figure prominently in her stories, and are often what leads to her heroines’ destruction. They are modern parables of loss of personal power. Her pain came as she discovered that people are self-serving, and no one can be trusted.

In the play, Shirley is alone, as is usual, drinking, as she struggles to express what she has said in the past only through fiction. Scream out the words that had only ever been parts of her stories, spoken by other fictional people. Scream out loud her own experience of betrayal and abandonment.

This is a ghost story. There are many voices that haunt Shirley in the play. There are her mother and her husband, but what other ghosts will not allow her any peace? Her inability to claim herself, to claim her own amazing voice as her own possession is, to me, the real tragedy of her story. I hope it serves as an inspiration to women to claim their present and the future they envision for themselves by facing their history and creating a future free of the specters of the past.