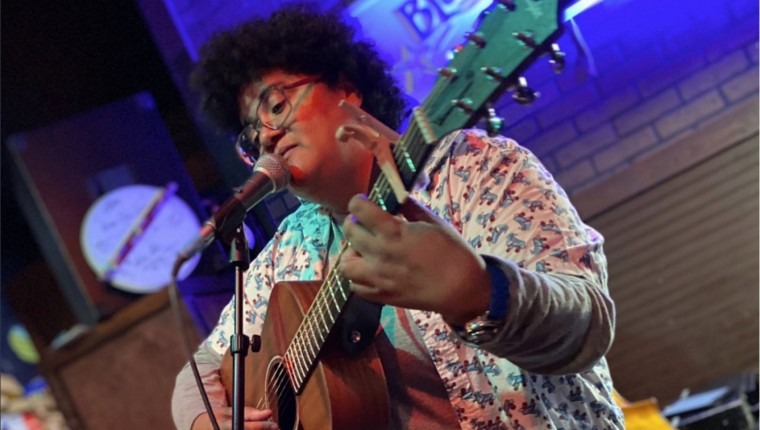 . . .
Jennifer Msumba is a multi-hyphenated creator – she’s a singer/songwriter, filmmaker and YouTube vlogger with over 30,000 followers, plus another 20,000 more between Instagram and TikTok.

Her award-winning short film, Like the Girls Who Wear Pink has been nominated for a number of awards and won Best Florida Short Film at the Key West Film Festival 2021.

Msumba also happens to be  a woman of color on the autism spectrum — and the author of Shouting at Leaves, her “sort of” memoir. A natural comedic genius with impeccable timing, her scripted short films are also quite funny and feature friends and companions, some of whom are also neurodiverse.
. . .

. . .
This week she performs at The Studio@620’s Signature Series on Thursday, August 11, and the audience will be held enrapt by an almost effervescent human who seems to defy odds. Msumba is an artist who helps us see not only how many ways there are to experience and give witness to the world – but reminds us of the power of art to help us transcend our own self-erected boundaries.

Msumba shares that her mom knew “from the start that something was going on” and by second grade she had been diagnosed with sensory processing disorder. By 15, an additional diagnosis – obsessive compulsive disorder – had been added.

Back then – Msumba is 44 today – the research into autism was sketchy, and doctors weren’t yet putting the symptoms together. “I was diagnosed with all the parts of autism, but separately,” she notes. Intellectually, her IQ earned her membership into MENSA, so the pieces hadn’t added up to a clear medical condition that was easy to diagnose.
. . .

The latest episode of Msumba’s “The Super Fantastic Autism Show”

. . .
She recalled wanting to reject the diagnosis when she was first informed in her early 30s that she was on the spectrum. Msumba said she went from being disbelieving, to being offended, to feeling ashamed. But when her mother sent her an article to read with the words, “read about yourself,” Msumba had an ‘aha’ moment that changed her life.

“It was like such a weight off of me. Because I had been blaming myself for my whole life.” The multi-talented artist recalls hating herself and suffering from low self-esteem – she faulted herself for not being able to “get past” roadblocks that seemed to keep popping up.

Frustration turned to anger, violence and self-harm. Living in “placements” from the age of 15 that were supposed to keep her safe, she believes now, only added to her misery and confusion.

As a child and young adult, Msumba says she had been “terrified” of doing anything outside of what she was told or expected to do – or believed she was expected to do. “So, I limited myself – and I suppose I was limited by people around me as well, assuming what I could handle and what I couldn’t.”
. . .

. . .
The autism diagnosis helped lay the groundwork for self-actualization – that, says Msumba, and time passing. Realizing she was getting older, she recalls that, “For whatever reason, one day I realized, Jennifer, no. I realized God gave me things – and I realized I wasn’t going to ever use them unless I allowed myself to go outside of the boundaries that have been set upon me.”

Msumba says that she found herself suddenly “exploding with all these things coming from my heart and my mind that I wanted to do, that I want to share” – and she wanted to show people what she had been “holding in.” “I just started taking chances. And it was like a liberation for me.”
. . .

. . .
Today this liberation includes — on top of vlogging, making films and videos, writing and performing her music, and creating content for social media – her first theater experience as a performer.

“I just tried out for my first play, a musical – and never been on a theater stage before, but my friends were like, hey Jen, the town is doing a play, want to come try out?  And I’m like, you know why the heck not? And I’m loving it already.”

She also “passed” that courage on to another girl in the play, who she had earlier convinced to take part in an open mic after hearing her sing.

“Actually, her first time onstage was when I convinced her to go to an open mic. She used to come to open mics in town, and she was shaking, like to the side.” The girl told Msumba she was too “scared to go up there.”

“And I said, well, I’ll go up there with you and I’ll play the ukulele for you and I’ll sit quietly but you can sing – and I’ll be there with you. And she trusted me enough and she did it. And now she is like the number one actress, doing all these plays and musicals – and her mom told me ‘You were the reason she got onstage for the first time.’”
. . .

. . .
At Studio@620, audiences will get to see three of Msumba’s short films, as well as hear her sing. A Q&A session will be moderated by St Petersburg Film Commissioner Tony Armer, who is a big fan, and helped produce Msumba’s film Like the Girls Who Wear Pink.

Armer met Msumba at a film contest. “She pitched her story, a film that she wanted to make. All these other filmmakers were pitching, you know, these big extravagant feature films that would cost millions of dollars and she pitched this really simple story. And I was like, ‘That’s awesome, that was a great pitch – you know how many pages in it?’ She said ‘four pages.’”

Armer immediately called some friends and told them, “Give me money, and we’re gonna help this woman make a movie.”

Msumba recognizes she’s becoming a role model because of the parents and young people who have shared with her how her courage has helped them to address their own barriers. “I really want to encourage people my age, and younger, to not be constrained by what they think their box is.”

She adds that means even if it’s family that is holding them back. “I had to start saying to them, no, let me try it. I’m gonna try it, I’ll be fine. So that’s the message that I try to put forward.” She also acknowledges, “if there’s something that you’re truly interested in or something you even just want to experience and share – it’s okay to be uncomfortable, unsure or nervous. A little bit of that is okay, because you have to work through it.”
. . .

She says that she loves to perform as well – but admits that it’s “scary, definitely. My mouth gets dry, my legs started to shake.” She travels with a support person who helps her negotiate conversations and people – speaking with more than one person at a time is a challenge and her support person helps minimize the stress.

Msumba says if there’s one thing she’d like people to realize about those on the spectrum, it’s that each case is different, even while there are often similarities. One similarity is the tendency for those on the spectrum to get easily overwhelmed – even when they don’t outwardly appear to be.

Her memoir offers her readers tips for coping with and flourishing while on the spectrum, and Msumba has had the satisfaction of already hearing that her words have helped others. One woman, she shares, told her that events in the book were so much like her own story that she literally highlighted dozens of pages to help explain to her family what she was going through.

. . .
The Studio@620 is a recipient of the Pinellas Recovers Grant,
provided by Creative Pinellas through a grant from the
National Endowment of the Arts American Rescue Plan.