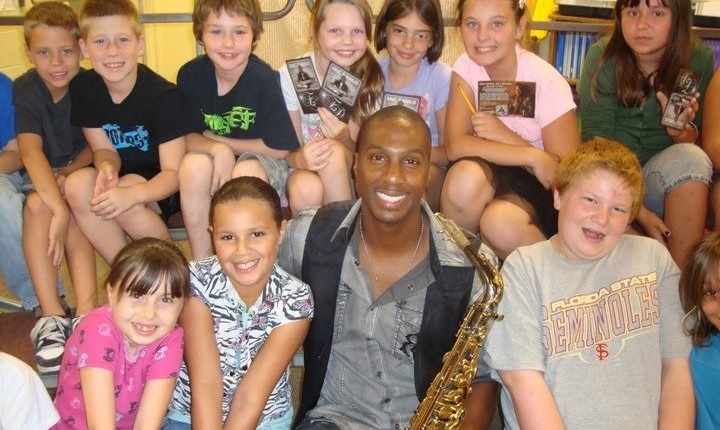 These are phrases you hear in a conversation with Eric Darius, the virtuoso saxophone player who appears at the Palladium Theater this week to perform his new recording, Unleashed. All proceeds go to the Clearwater Jazz Holiday Foundation and its Music, Education & Outreach program.

“I was looking back at my journey recently and thought of all the experiences I had growing up, and that I wouldn’t be the artist I am today without those opportunities,” says the 39-year-old musician, who grew up in Tampa and now lives in Los Angeles. “I feel I have a responsibility to pay it forward, encourage the next generation and help preserve the future of music.”

Darius is referring to the liberal arts education that shaped his future as a prominent jazz-R&B-pop musician, songwriter and producer. Lots of kids go through school with marginal support beyond their required learning, he says, and those who benefit from the extra encouragement often stand out. The strong arts program and education he received from 1997 to 2001 at Blake High School, the public arts magnet in Tampa, ramped up his confidence level and allowed him to tackle new challenges.
. . .

. . .
“Blake High really shaped me as an artist,” he says of the school on the Hillsborough River across from downtown Tampa. “With so many budget cuts in public schools and almost no music programs, it doesn’t bode well for the future of music. The younger generation just doesn’t have the creative outlet they should be getting.”

Magnet schools such as Blake offer specialize curricula that help students better focus on current and future interests, and their retention rates are relatively high – Blake’s 80 percent graduation rate is above the average 72.6 percent rate of Hillsborough County public schools.

“I benefited greatly from the music-arts programs at Blake, and education is very important to me,” Darius explains. “I’m an advocate for music in the schools and I want to help keep it alive. It’s important to me to expose kids to jazz, encourage them to follow their dreams and inspire them to play musical instruments.”
. . .

. . .
On a broader scale, arts education in U.S. public schools has shrunk dramatically over the last two decades, according to the American Academy of Arts & Sciences. “We are at a crisis point, where access to arts education is declining steadily, and action must be taken to reverse the trend,” notes the Academy’s Commission on the Arts.

His high school experience encouraged Darius to give back and be proactive about his passion. Fifteen years ago, he started a program he calls “On a Mission in the Schools,” a national campaign to encourage arts education and to help pay for musical instruments.

Begun in Tampa, the mission extends to schools and colleges nationwide, currently with appearances in conjunction with the Unleashed album tour. During each campus visit, Darius performs for students and shares his stories of encouragement and opportunity.
. . .

. . .
One student he mentored is 24-year-old, Dunedin-born Kyle Schroeder, whom he met in 2013 at the Tampa Bay Black Heritage Festival. Up until that night, Schroeder played guitar and oboe, but after seeing Darius, he decided to take up the saxophone.

Nine years later, Schroeder graduated from the University of Miami with a Bachelor of Music and just released his debut album Get With It.

“Eric has been a great role model and has certainly had an influence on me since that first night,” he says. “He has brought me up onstage to play at many of his gigs. Not only does it give me a chance to express myself, but to learn and absorb from him in real-time. Moments like these have a lasting impact on a young musician.”

Another Darius “pay back” includes an organization he loves – the Clearwater Jazz Holiday, which presents a series of concerts each October and extends its own mission to help educate and support young people.
. . .

. . .
The Jazz Holiday’s Music, Education & Outreach program touches about 32,000 students across many Tampa Bay area middle and elementary schools. Students learn about the jazz standards and essential components of jazz music, such as tempo, improvisation, and dialog among artists in a group.

The imprint of jazz on American culture is indelible, and its evolution should be embraced by each new generation, says Steve Weinberger, CEO of the Clearwater Jazz Holiday Foundation.
“Our instructional programs are helping students and band directors elevate their skills and make meaningful connections,” he says of the Holiday’s education efforts. “And the many unique performance opportunities we provide are also platforms for personal growth and development – effectively lifting up new performers carrying on the jazz tradition.”

Getting a foothold into the world of jazz can be intimidating for a newcomer. So, what advice does Darius give those who want to pursue a career in music and the arts?

“Stay true to yourself and your craft,” he says. “Know that to be successful takes patience, practice and perseverance. It’s important to have your own identification and your own voice.”
. . .

The Impact of Arts Education

. . .
Americans for the Arts, an advocacy group based in Washington, D.C., lists 10 ways the arts make a positive impact in the schools.