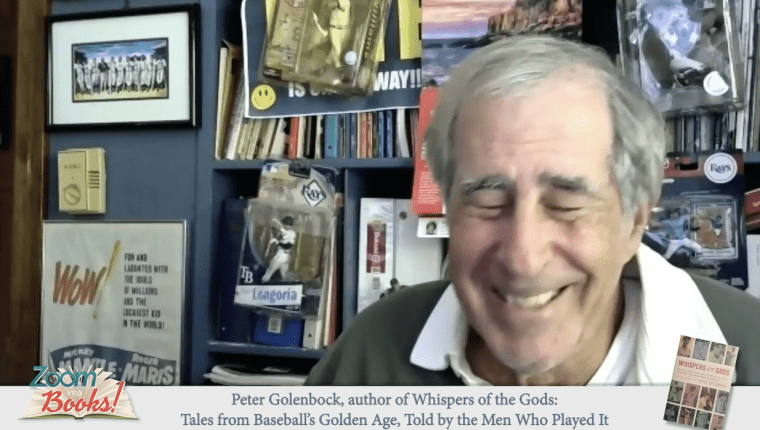 Inside-baseball (adj.) American slang, referring to the minutiae and detailed inner workings of a system that are only of interest to experts, insiders and aficionados. First used in 1890 to describe a particular way the game of baseball was played – one that involved singles, walks, bunts and stolen bases rather than power hitting.

Whispers of the Gods by St. Petersburg’s most famous baseball writer is not just an inside-baseball baseball book.

Sure, the book includes some “minutiae savored by the cognoscenti, delicious details, nuances discussed and dissected by aficionados,” the definition of inside baseball offered up by William Safire, who for years wrote a New York Times column about the “inside baseball” of language. But Whispers of the Gods by Peter Golenbock doesn’t just appeal to the expert steeped in the stats and history of the sport. Like the best of baseball books, it offers up stories and baseball lore that even a casual baseball fan can’t help but find compelling.

The material comes from old cassettes of interviews Golenbock did for his long-list of published books – eight New York Times bestsellers, including Dynasty, a history of the Yankees from 1949 to 1964 and oral histories of the Brooklyn Dodgers, Boston Red Sox, Chicago Cubs, St. Louis Cardinals and Browns, and New York Mets.
. . . . . .
For each book Golenbock interviewed dozens of players, executives and journalists, from Superstar Stan Musial who played his whole career with the Cardinals to Jim Brosnan known as The Professor, who pitched in the major leagues from 1954 to 1963 for the Chicago Cubs, St. Louis Cardinals, Cincinnati Reds, and the Chicago White Sox.

Many of the details, facts, anecdotes and histories from those cassettes of course ended up in the body of his books. But some of the stuff remained in the tapes unused. Now some of the juiciest tidbits left behind have been revived here – tales of club rivalries and unresolved grudges, unexpected friendships, conflicting memories about what really happen on the field when Jackie Robinson desegregated baseball and, of course, money. In nearly every interview, the players bring up money — how much (or more often how little) they were paid in those early years of baseball.

Tales, as the book’s subtitle puts it, from Baseball’s Golden Age, Told by the Men Who Played It.

Red Sox superstar Ted Williams, at 89, makes an impassioned plea for the rehabilitation of disgraced baseball legend Shoeless Joe Jackson who, along with seven other Chicago White Sox players, was accused of throwing the 1919 World Series. Gene Conley reflects on how he managed to play for both Major League Baseball and the National Basketball Association simultaneously. Pitcher Jim Bouton opens up about how hurt he was that his own book, Ball Four, an honest look at behind-the-scenes in baseball, earned him lifelong shunning from Mickey Mantle and the Yankees. Roger Maris puzzles over the resentment he stirred up for breaking Babe Ruth’s record 60 home runs in a season.
. . .

. . .
And speaking of Babe Ruth, Ed Froleich serves up some of the book’s best stories when he talks about the Yankee great. A trainer for the Yankees when Ruth was on the team, Froleich reports, for example, that when he told the Babe that some people in Chicago were still repeating the legend that he pointed to center field before hitting his famous home run in the 1932 World Series, Babe Ruth debunked the canard – “‘You tell those people for Baby’—he always called himself Baby —‘that Baby says they’re full of crap right up to their eyes. I may be dumb, but I’m not that dumb. I’m going to point to the center field bleachers with a barracuda like Root out there? The next pitch they’d be picking out of my ear with a pair of tweezers.’”

Froleich wryly comments on Ruth’s unique stance on the field. “Have you seen films of Babe hitting?” he asks Golenbock. “He had his ass to the pitcher, and he would only be looking at him with the corner of his right eye. This is a direct contradiction to the theory that you see something better if you look at it with both eyes. If I were ever going to coach a hitter, I would tell him to have both eyes on the pitcher. Stan Musial did that. Not Ruth. And Babe had a dip in his swing, a little hitch, and if you advised a batter, you’d tell him he could never hit with a hitch. And for most people, this is true. But such advice is for the ordinary person. When you’re Babe Ruth, the ordinary doesn’t apply.”
. . .

. . .
Some of the most contradictory memories in the book are about how ballplayers reacted when the Brooklyn Dodgers signed up Robinson as the first African American to play in the Major Leagues. Cardinal shortstop Marty Marion vigorously denies that Cardinal players threatened to strike if they had to play Robinson. “Striking?” he says. “We thought that was ridiculous. Sure, we didn’t like Jackie Robinson. We didn’t like anybody on the Dodgers. But that had nothing to do with Jackie Robinson being Black.”

Pitcher Kirby Higbe, on the other hand, freely admits that he was one of the Southerners on the Dodger team who went to general manager Branch Rickey to plead with him not to add Robinson to the roster. Higbe contends, however, that that was not why he was traded by Rickey a month into the ’47 season along with Dixie Walker and Dixie Howell, the other Southerners who opposed Robinson’s signing.

Rex Barney, a player from Omaha, Nebraska who pitched for the Brooklyn Dodgers when Robinson was on the team, recalls just how difficult a time Robinson had that first year. “That first season that Jackie was with us, we went to Pittsburgh, Chicago, St. Louis, the first trip around the league with Jackie, and a lot of players on other teams wanted to strike. They didn’t even want to go on the field. In those days, 90 percent of the baseball players came from the South. Now they come from the West, California and Arizona. But there were a lot of redneck people. They would look at you and say, “My ancestors, my kinfolk, they’d kill me if they found out I was playing with a Black man.” And they didn’t say ‘Black man,’ but it’s the only kind of talk I can use. That’s the way they were. It was ridiculous.”
. . . . . .
Another fascinating interview was with Monte Irvin, the man that could have been the first Black player in the Major Leagues, but, says Golenbock, Irvin turned the Dodgers down. “He felt so angry at his racist treatment by white superior officers in the army that he told the manager he wasn’t psychologically prepared to take on the abuse that Robinson would absorb,” Golenbock writes. Irvin finally ended up signing with the New York Giants in 1949. “This was two years after Jackie,” says Irvin. “They had gotten used to seeing an African American on the field. It wasn’t a picnic. We heard the names. But we didn’t have it as tough as he did.”

Golenbock includes excerpts from his 1981 interview with pitcher Roy Campanella for his book Bums on the Brooklyn Dodgers. Campanella was the second African American to break the color barrier in Major League Baseball, joining the Dodgers in 1948. Just before the Dodgers moved to Los Angeles ten years later, his career was cut short by a car accident that left him in a wheelchair for the rest of his life. Golenbock describes him as “one of the kindest, sweetest men.”
. . . . . .
There aren’t many witness still around from baseball’s Golden Age era, usually considered to be from about 1920 to 1960. “All of the baseball cards are dying,” sports and political commentator Keith Olbermann said when Hank Aaron died in 2021. (Olbermann is quoted by John Thorn in his introduction to Golenbock’s book). All of the 16 players Golenbock includes in Whispers of the Gods have passed on.

But in Whispers of the Gods, their stories come alive.

“Baseball is a backward-looking institution,” writes Thorn who has the impressive title of the Official Baseball Historian for Major League Baseball. “It pleases us to think that giants once strode the earth and their like will not be seen again. This is baloney of course. But serve it up between two slices of bread, with a shmeer of nostalgia, and count me in.”
. . .

. . .
Traditionally, the Golden Age of Baseball is said to span between 1920-1960. What have been the Golden years for you personally?

I was in awe when I went to Yankee Stadium to watch the Yankees of Mantle and then Thurmon Munson and then Derek Jeter. I am in awe now when I go to the Trop and watch the Rays, one of the finest defensive teams in baseball today. Every era has stars and excitement and gold.

Which current player do you think would make the most interesting interview subject?

Golenbock: Many players would make for interesting interviews. I would love to talk to Albert Pujols, who is about to hit his 700th home run, joining Barry Bonds, Hark Aaron and Alex Rodriguez in that exclusive club. Aaron Judge would also be interesting, as he attempts to break Roger Maris’s record for home runs in one season hit by an American Leaguer.

There are many interesting Latin players today, but my Spanish isn’t very good, and understanding their answers would be hard. When I interviewed Sandy Amoros, the left fielder for the Brooklyn Dodgers, he understood English but spoke only Spanish. He spoke to me in Spanish, and I brought the tape to my mother, a high school Spanish and French teacher, and she translated the tape for me.


Since 2002 baseball has celebrated Roberto Clemente Day on September 15 to honor the Puerto Rican superstar who died in a plane crash while attempting to deliver supplies to earthquake victims in Nicaragua. This year, the Rays made history with an all-Latino starting lineup on September 15, which was also the first day of Hispanic Heritage Month. Were you surprised?

Golenbock: On Roberto Clemente Day last week, every member of the Rays starting lineup was Hispanic, which was a first. Was I surprised? When I saw that Ji Man Choi, Yu Chang and Taylor Walls weren’t in the lineup, I started to do the math, and I saw that every player came from Puerto Rico, Mexico, Panama, Venezuela or the Dominican Republic.

I thought back to when Major League teams wouldn’t take players because of the color of their skin, and it made me smile.