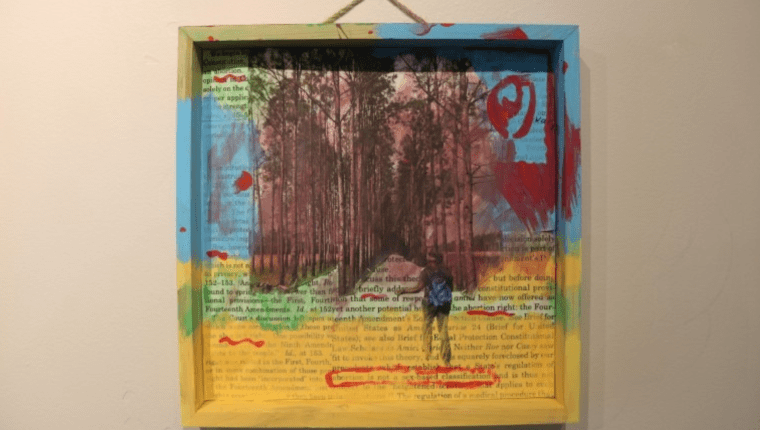 Story and Photos by Jake-ann Jones

Intentional Tension examines race and culture through the eyes of seven artists working in a variety of mediums. The exhibit, which has been extended through September at the Tully-Levine Gallery at the ArtsXchange Plaza in St. Pete’s Warehouse Arts District, explores iconography, history and the Black body through metaphor, language, and both literal and fantastical space.

Artists from the exhibit, which was curated by Dr. Dallas Cooper Jackson, shared some of their inspirations and creative themes at a panel presented by the Warehouse Arts District Association (WADA).

Combining a variety of styles and mediums, the show invites viewers to enter African American visual art through a myriad of lenses. The works presented include everything from sculptures by Ashley Rivers to McArthur Freeman’s absurdist, often surreal commentaries on race through familiar children’s book characters.

In her statement written for the show, Geveryl Robinson, MFA, Assistant Professor of Instruction at USFSP, noted, “Through caricatures, abstraction, sculpture, portraiture, and fantasy, Intentional Tension showcases how Black people view the world and how they are viewed. How their ancestors viewed their future and how tensions have hindered their vision. How women simultaneously view and control their bodies and how that same control is being stripped away. How Black people’s peace is like a still river and how aversion to that peace causes others to rock the boat to the point of censorship, because the art is a reflection of a past they’d soon like to forget and one they’d like others to ignore.”

The artists themselves are educators, diversity experts, gallery owners and former restaurateurs, varying in age and experience. Through their diverse visions, viewers are offered both contrasting and complementary versions of the Black experience moving through time.

“My research and work is centered on investigating African American life and reimagining it from the period of emancipation to modern times,” shares Dr. Dallas Cooper Jackson, who curated the show.

Jackson explains that while some of the inspiration for the show grew out of his course work for his MFA program, he was also inspired by an artist talk from another exhibition he did, where the emergent theme became “How did we get here” considering the racial atmosphere after the George Floyd murder.

Hillary Van Dyke, co-founder of Green Book of Tampa Bay, is new to visual art, and was inspired by very recent events. “My pieces mainly, were inspired by frustrations I was having while reading the majority opinion after the Dobb’s decision,” notes Van Dyke, in reference to the recent loss of a woman’s autonomy and right to choose with the drastic repeal of Roe vs Wade.

Using a mixed media approach combining images of a wooded area of Tampa that she hikes in, with tree sprigs and text, she contrasts the “space that I feel so free in, with this language that was making me not feel free.”

Sculptor Ashley Rivers notes that her works “talk about the struggles and the hardships that we go through as individuals but that make us who we are, who we’re meant to be – and they’re representative of coal turning into diamonds. Coal under pressure turns into these beautiful gemstones. And that’s kind of what we are as people, and what we’ve always been.”

Myiah Moody, the youngest artist on display, comments on a trio of paintings titled, I am My Ancestors’ Wildest Dreams. Her pieces are “inspired by the fact that the next generation is always finishing up the dreams of the last generation – our ancestors may have had dreams that they didn’t get to execute in their time here, but those ideas never left, they’re just passed on to us.”

Freeman notes that using iconography allows others to access a piece and make their own connections to it. “People recognize some things, they start to relate to it, and then begin creating their own stories as well,” he offers. ”For me, the works are also subversive,” he adds, noting that contrasting familiar characters, like his Black Pinocchio, with the bizarre figure of an anthropomorphized tree in the painting Strange Fruit is both alarming and encourages the viewer to consider more thoughtfully the messages within the piece.

With her vibrant interpretations of 19th century Black tintype photos, Vivia Barron shared her admiration of the “beautiful Black people from the 1800s, when tintypes were first invented.”

Noting that the figures in the original sepia images she works from show “people who were beautiful and regal – and there’s no color,” she painstakingly recreates the images in boldly beautiful shades and tones, bringing a fresh perspective to historical narratives.

“Without iconography, we have conceptual art – and conceptual art is left open to broad interpretation,” notes Jackson. “With this collection of work each individual piece represents deep research that had to be done in order to arrive at what you see before you.”

One of his own works, Ben and Jemima portrays two familiar and complicated characters synonymous with American southern food traditions paired together. Their cheery countenances – that became so familiar on syrup and rice packaging – fly in the face of the lives of the real men and women who worked in ‘massa’s house’ with little to nothing to bring home to their own families when the day was done.

You still have a few days to catch this exhibit, so don’t delay.
. . .