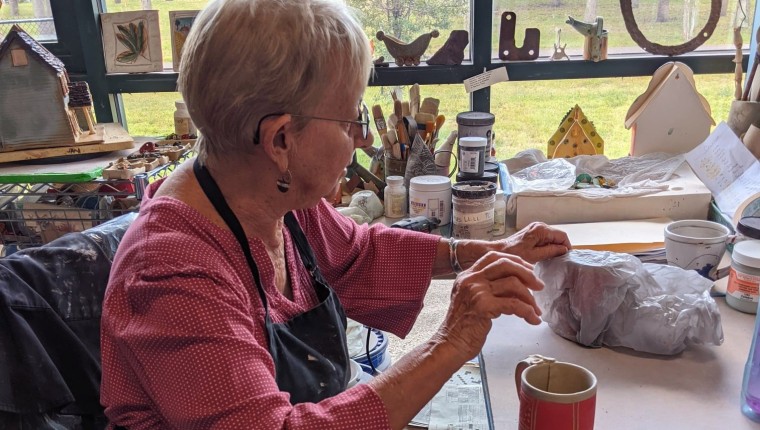 A Focus on The Morean Center for Clay

. . .
In 1960, Jan Richardson took a clay class in college. She became so enamored with it, she didn’t spend as much time on her other classes. Had she known then that her path thereafter would become a lifelong love of learning and teaching, living an artistic life, and mentoring others, she probably wouldn’t have been too surprised.

“For the next ten years I was able to do a little bit,” she says. “I didn’t really have training for work. John was in grad school, we had two little kids, but I sew very well. I started a little boutique gallery on the edge of the University of Minnesota, called Laize Lev, which means the students. I made all the clothes. I started gathering a pod of other artists — they had to be either a student or a spouse of a student.

“I’ve always done artistic things but other than art history and classes at college, that was all I had for training. I knew I wanted to have a pottery business. When we settled in Maryland, I had the space — we  had a big farm with lots of outbuildings. I went to the local community college and used their facilities in exchange for cleaning the studio, until I could afford my own kiln. I’d drive up there in this old bouncy truck that didn’t have power anything – and with the dried work. How I got it there in one piece I don’t know.”

In 1975, the farm became Richardson’s pottery center and with a lot of hard work, grew into a thriving business dedicated to hand-built, collectible clay cottages. “Windy Meadows started on the kitchen table,” she says. “Then we moved to the tack room in the barn. We had a little pony that would come in and nudge me while I was working.”

She built a kiln in the pasture and converted a tractor shed into a workshop. Another outbuilding was used for shipping and the barn’s second level was her office. Her two kids, Bradford and Heather, were involved as well. “They couldn’t go out to play with friends until they shingled a roof,” she laughs.

Each style of Windy Meadows cottage started with Richardson’s original and a first edition. She trained artist employees to assist with each line thereafter. “Sometimes we’d have numbered editions of 15, sometimes 100, depending on the complexity of the piece. No two were ever alike. Each had a different roof texture, shutter colors would change, as would the embellishments. Every shingle on every roof was placed one by one.”

The cottages sold in stores for a while. Richardson and her children who had grown into adulthood knowing every aspect of the business, helped sell at art fairs. “I had two trucks and Bradford or Heather would go off to a show and I would go to another. I could do two shows a weekend. We estimate that we did 1000 juried shows.”

She and John had gone separate ways years earlier and after 35 years on the farm, Richardson felt exhausted.  “I received a letter from my old college boyfriend. After a while, I responded.” She sold the farm with a great sigh of relief and headed West. He was an avante-garde poet and had his own independent press. She settled in Washington, close to the Oregon border, and built her dream home.
. . . . . .
Richardson calls it a lucky time. “I was invited to do a show at the Morean Gallery, at Morean for Clay, which at the time was called St. Pete Clay,” she says. “I gave a two-day workshop and I think we had 25 people. I got to know everyone and realized this is a wonderful place to be.”

Her college boyfriend who later became the inspiration for her move to the Pacific Northwest, passed away after a battle with lung cancer. In the winter of 2013-2014, Richardson participated in the Oregon Potters show. “We started a craft tour as well as a pottery event but I realized I wanted to be in St. Pete because there were so many different opportunities for me educationally than were out there, where it took three hours to get to Portland — four to five to Seattle.”

She went in for her annual mammogram. “I got my first cancer diagnosis. I was two hours from the hospital — over the mountain. I knew that was going to be rough,” she says. “I closed up the house and left.” . . .
Through clay, teaching and connecting with her community, Richardson has built strong bonds with Morean artists.  “Every January we have people come from all over the country, even people from Europe. We have three senior potters come in, some who helped build the original kilns 20 years ago.

“We have the biggest anagama kiln in the South. It’s a wood-fired kiln. It takes five days to fire it. it takes three-ish days to load it. You have to have a clay that will withstand the temperature and you have to know that your piece could blow up or something could fall on it,” she says. “It’s a huge kiln so it will have about 1500 pieces in it. I can stand in it. Once it gets to temperature, we have to wait at least a week until its cool enough to go in there.”
. . .

A look at the Morean’s massive anagama kiln
. . .
Besides her knowledge of kilns and the effects they have on different types of clay and glazes, she is just as skilled in her understanding of clay thanks to decades of both successes and mistakes.

“I dug up clay in Ohio when we lived there,” she says. “It threw like a charm without any additions. It was wonderful. The first fire worked just fine. We glazed them and put them back in the kiln and they all melted because it was low fire clay. We hadn’t tested it sufficiently before we put it in the kiln.”
. . .

Richardson’s classes
at the Morean Center for Clay

. . .
“I teach on Wednesday nights. I’m going to be showing people a new clay that has paper mixed in with it,” she says. “Clay is very sensitive to different temperatures — there is low fire, we work in mid-range. But if somebody wants to work in the wood fire or soda fire, then that requires a different clay formula.”

Inside the old train station that is the Morean Center for Clay are offices, studio spaces, a café, glazing rooms, kilns, and large tables for working the clay. Inside Richardson’s office a few of of her Windy Meadows pieces wait for glaze. It’s orderly but busy at the same time — obviously a working artist’s space to focus and create.

“There are as many clay formulas as there are cake recipes,” she continues. “They are formulated for function, for color, for look. They are made from five or six different elements that come from all over the country.”

Ancient Intergalactic Warrior Vessels hang on a wall outside of her studio. Ceramic watering cans bend like flower stems reaching from shelves. “We used to make clay in school,” she says. “We’d put a kerchief over our noses and we’d throw half a bag into each of two different trash cans, then mix it up, let it sit for a week. Wedge it. All clay has to be wedged. Not all kids today have that experience of making the clay. I think it’s valuable. Now we just go to Highwater Clay and buy it.”

Her students may not make their own clay but they do experiment with glazes. “The glazing is complex,” she says, “we start simply. If we make our own, it’s a specific chemical formula. There have been incredible developments in glaze chemistry in the last 25 to 30 years. A lot of it has been attributed to the space program.”

Another diagnosis (but it won’t stop her!)

. . .
“The first was eight years ago,” she says. “I went through that, had chemo, no problem. Last summer I started having a pain in my hip. I went to physical therapy – we just couldn’t get rid of it. it was time to get an image. My oncologist called and I went in. I was just shocked. I have stage-4 bone and liver cancer. I had a little rocky start at the beginning — had a couple stays at hospitals. Now I am just getting shots and pills.”

The Morean’s Fall Session with Jan Richardson begins November 2 and runs through December 10 every Wednesday from 6 to 8:30 p.m. Richardson will be teaching Handbuilding and she limits her classes to ten students. “It’s been gratifying to me because so many people repeat,” she says.

As far as the cancer, it doesn’t stop her from doing what she loves. “I have bounced back. It’s really amazing. I’m not as energic as I used to be, but I’m 84.”

She recommends that anyone who wants to take a class, sign up as soon as possible. “We have a whole room that is just wheels. Don Williams teaches Monday mornings into the afternoon. Then Wednesday nights. Thursdays there is another teacher for Handbuilding. She has a different way of going about things and a different palette. Three or four are teaching wheel. There are a couple new classes but a lot to choose from. The variety changes every session.

. . .
Photos courtesy of the artist
. . .
The Morean Arts Center is a recipient of the Pinellas Recovers Grant,
provided by Creative Pinellas through a grant from the
National Endowment of the Arts American Rescue Plan.