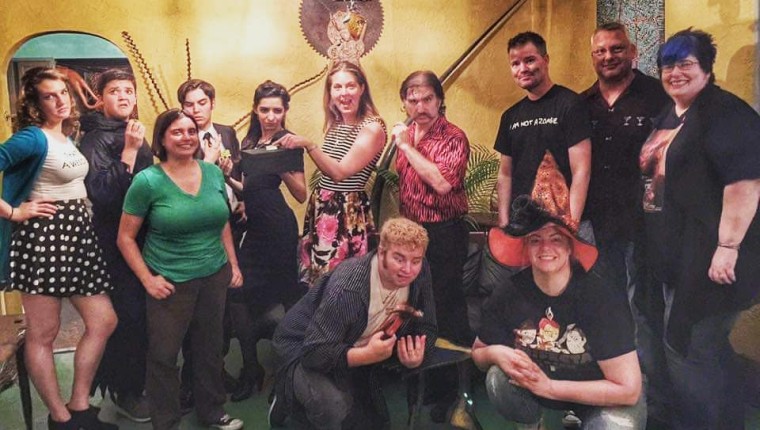 . . .
Over the past decade that Wordier Than Thou, the Pinellas County-based literary arts organization I founded in 2012, has existed, it’s earned a reputation for blurring the lines of what a book event can be.

In Fiction, LIVE!, actors perform dramatic readings of works by local authors. Our saucy burlesque and drag shows celebrate books in a new way. In our immersive murder mystery games – written and produced by our amazing crew – adults get to take on new personas and play a little bit, whether it’s a 1980s summer camp or an over-the-top 1920s-era gala.

And then there’s Read No More, our bookish take on the classic haunted house each Halloween season and a nod to New York City’s famous Sleep No More event. In the past seven years, it’s grown into one of our signature happenings.

Read No More transforms someone’s actual home into a stage. Each room features a different short, scary play – all written and produced by teams of local writers and actors. Now dubbed our “murder house,” each room tells the tale of a different murder set in a different decade. “Local writers can explore haunting themes and actors can perform individual scenes on a small scale,” Amanda Dodge, Wordier Than Thou board member and RNM writer, says. “It’s a great way for local talent to express themselves creatively without the pressure of a full stage run or committing to writing a whole novel or screenplay.

“Art doesn’t have to be limited to Broadway productions and epic tales. You can find it in the nooks and crannies of neighborhood events.”

Not only is the Halloween event “a really unique concept,” it’s also “an excuse for writers to try something new,” Cole Bellamy, Wordier board member and RNM writer, says. “Short-form horror is such a great tradition to work with, as well. I grew up watching all those great horror anthologies like Tales from the Crypt, Creepshow or The Outer Limits, and it’s great fun to try to write something like that.”

He adds, “It’s also just a blast. We’re doing weird underground theater, but without any pretensions or self-importance – just letting writers and actors play around and tell some spooky stories.”

The event launched in 2015 using the Gulfport home of artist Ciara Carinci as its backdrop. After taking a year off because of the COVID-19 pandemic, last year, we moved our Read No More project to Dodge’s south St. Petersburg home, where it will be held again this year on October 28 and 29.

The event is “like a moving play, with fresh scenes in each room,” Dodge says, adding that she’s excited by the creative possibilities of the show each year.

“Suddenly every room is a potential space where something dramatic can happen. My furniture and decor become sources of inspiration to others and set the scene for spooky tales,” she says. “I just need to remember to clean up before the show. There’s nothing scary about unwashed dishes in the sink.”

Over the years, many local authors, storytellers and artists have been involved in the production of Read No More, including comic horror author and Bram Stoker Award-winner Jeff Strand, Haunted Tampa author Deborah Frethem, Storytellers of Old Tampa Bay founder Ross Tarr, and Backroads of Paradise author and The Gabber publisher Cathy Salustri. Anyone who loves Halloween or who simply supports the arts in the Tampa Bay area will appreciate the event, Collins says.

“There are three things I love about Read No More. First, it’s an authentic local event. It showcases the talents of Bay Area writers and actors. It’s set in a real house — not a set — and the stories are often inspired by real Florida history.

“Second, it’s clever, whimsical and psychologically compelling, not driven by cheap jump scares and gore,” he explains. “Third, it’s an event produced by a not-for-profit group and put on entirely by amateurs and volunteers, so it feels more like hanging out with your weird, creative friends and less like going to a theme park.”

You can find ticket information here. If you have a group of 12 or more, email wordierthanthou@gmail.com for group rates.
. . .