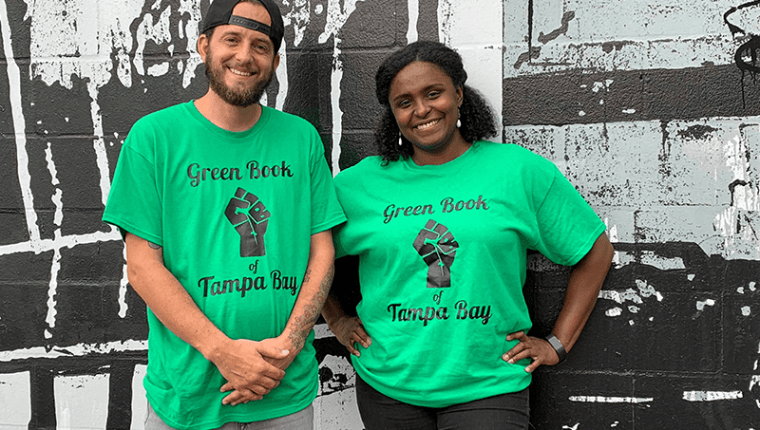 Green Book of Tampa Bay provides a directory of Black-owned businesses in Pinellas and Hillsborough counties – the online list currently includes more than 700 establishments – as well as a guide to Black historic and cultural sites and Black artists. The project’s aim is to encourage people of all races to support a community that historically has been short-changed. Its slogan is simple – “Helping you put your green into Black.”

Despite its title, Green Book of Tampa Bay is not a book, but it’s inspired by one, The Negro Motorist Green Book. The history of that book with a green cover — named after its author, Victor Hugo Green — reminds us why a project aimed at encouraging all consumers to patronize Black businesses is so important.

The historic Green Book — well known to those who lived through Jim Crow America or who have studied Black history — was launched by Green, an African American mailman based in New York in 1936, a time when white-owned businesses in America could openly — and legally — discriminate against African Americans.

Black people traveling by car during the Jim Crow era routinely found themselves confronted by businesses that refused to repair their vehicles, refused to provide them with lodging and refused to serve them food — all these refusals within their legal rights. To be safe while navigating their way through a hostile environment, African American travelers needed a guide that mapped out Black-friendly havens along the way.

The Negro Motorist Green Book was known as “the bible of Black travel during Jim Crow,” a time when Black travelers faced “racial prejudice, price gouging and violence,” historian Gwendolyn Reese said during a recent Community Conversation with the African American Heritage Association sponsored by Tombolo Books on Zoom.

The Negro Motorist Green Book ceased publication in 1964 after the passing of the Civil Rights Act when legal discrimination against Black people was banned, but inequalities between white and Black America remain hard-baked into our country’s social and economic structures.

Black people now are free to spend their dollars at white establishments, but the majority of white people still do not patronize Black businesses. Green Book of Tampa Bay is an attempt to help close the inequality gap that persists in 21st century America by encouraging patronage of Black businesses by people of all races. The project is the brainchild of a Black woman, Hillary Van Dyke, and a white man, Joshua Bean. They call themselves socialpreneurs. Van Dyke, who currently is pursuing her doctorate at USF, is originally from Indiana. She is an Outdoor Afro-St. Petersburg/Tampa Bay Area leader.

Bean, who is married with two daughters, came here as a child from Oklahoma. He is a social worker. They met when both were working at Azalea Middle School, a predominantly Black school in St. Petersburg. At the school, they witnessed Black kids struggling with poverty and too often lost to violence, living in “a Sunshine City where the sun doesn’t shine on everyone.”  They wanted to do something that could make a difference.

The idea to launch Green Book of Tampa Bay came after both watched a Netflix documentary series called Trigger Warning in which Black rapper Killer Mike explores revolutionary ideas that might bring about social change. In the first episode the rapper spends three days using and consuming only products that come from the Black community. “It aligned with the thinking we were having of being intentional with your spending,” says Van Dyke. Why direct your money to big box stores like Walmart and Amazon when there are Black-owned businesses that could offer you the same service?

Van Dyke and Bean, who routinely were swapping information with each other about interesting Black cultural sites, artists and musicians, began to ask themselves, “How can we start sharing this with other people? How can we be part of helping people put their dollars into an economically struggling community and help redress the harm that history has created?”

“Hillary was the one who taught me about the original Green Book, something I didn’t learn about in my Eurocentric upbringing in the Oklahoma City public school system,” says Bean. “We got to do better — not in a white savior kind of way, but by being intentional with our money. You can’t know where you are going until you know where you come from.”

Back during Jim Crow, the Green Book steered Black travelers to Black-friendly places and alerted them to unfriendly ones. Black travelers were warned that Gulfport, for example, was a sundown city.  Sundown cities posted warnings that only whites were allowed within their city limits after dark, often using racial slurs on those signs, points out the Black-owned Weekly Challenger in an article on sundown towns.

St. Petersburg and Largo, according to anecdotal evidence, actively enforced segregation without signs, according to the Challenger. Until 1961 when Dr. Ralph Wimbush integrated the downtown Maas Brothers lunch counter, Black people were only allowed in downtown St. Petersburg if they were working there.

Now such discrimination is forbidden by law, but Black businesses throughout Pinellas and Hillsborough counties still face challenges stemming from “where we came from.”

According to the Center for Responsible Lending, businesses of color were more likely than white-owned businesses to be disadvantaged by the structural limitations built into the Paycheck Protection Program (PPP).

The recently issued Pinellas Equity profile, which examined data gathered throughout the county, found that Black people were at the bottom in employment, income, wealth, education, health, justice, housing and transportation, costing the county billions of dollars in potential economic growth each year.  “It is estimated that without racial gaps in income, the economy in the region would have been $3.6 billion stronger in 2016,” the profile says in its summary.

“The goal is that if we build the bottom up, everyone is helped,” says Van Dyke, citing that  study. “We know that Black people frequent white businesses but how often do white people spend their money in Black-owned businesses?”

In March 2020, Green Book of Tampa Bay linked up with One Community St. Pete, a comprehensive economic growth plan for the Black neighborhoods in South St. Petersburg. Through this partnership, Van Dyke and Bean worked with a web developer to improve their site. Now operating like a Black business Yelp — minus the ratings — you can search the site for an African American business by category, city or name. You can also support the guide via Facebook and Instagram.

Today the Green Book of Tampa Bay provides information on Black historical and cultural sites, Black artists and Black-owned businesses that all people can support. And they practice what they preach. The services they themselves use to print their T-shirts (Debonair Prints), to design their logo (Astute Observations), for website development grants (Creative Courtois and Staplesco) and to create their business cards (SpeedPro) as well as their community partners (The Deuces Live and One Community St. Pete) are all Black-owned businesses included in their directory.

Helping us put our green into Black.