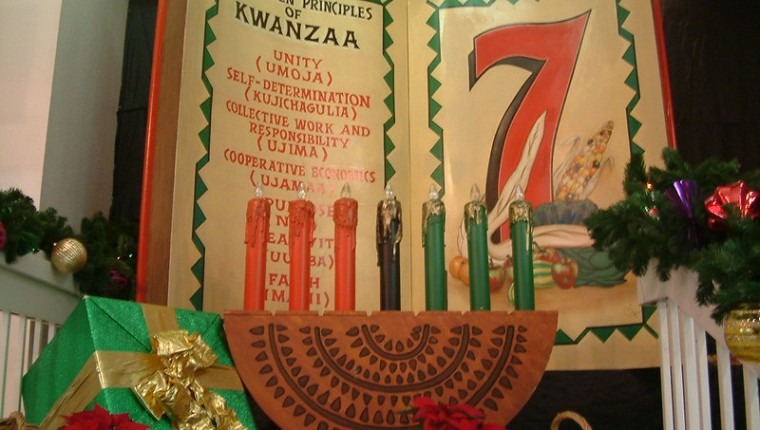 Celebrating Kuumba (Creativity)
on the 6th Day of Kwanzaa

. . .
Kwanzaa, the annual seven-day celebration of African America culture created in 1966, revolves around seven principles. Each principle is given its own day, a Swahili name and a candle lighting ceremony. On the sixth day a candle is lit to Kuumba, the Swahili word for creativity.

Since Kwanzaa begins every year on December 26, creativity is always celebrated on New Year’s Eve, a time when we look back with nostalgia and forward with a mixture of dread and hope – often fueled by adult beverages. Not a bad metaphor for the creation of art itself.

This week Kiva Williams, founder of the Mahogany Kids Fine Arts Foundation, is taking a group of  kids and parents to the James Museum in St. Petersburg to visit the Black Pioneers exhibit in celebration of Kuumba. Williams’ nonprofit organization, based in Wesley Chapel, seeks to empower minority youth through music, art and dance.

Inspired by Williams’ excursion and the sixth principle of Kwanzaa, here are seven opportunities for you to honor the creativity of the Black community in our area.
. . .

1. Take in the James Museum’s
Black History Quilt Exhibit Before it Closes

Black Pioneers: The Legacy of the American West, the first of its kind, traces Black history in the American West through narrative quilts — beginning in 1528 with the arrival of the first African, through the Civil Rights Movement.

Barbara McCraw, a quilt maker of Waller Texas, for example, tells the story of Abby Fisher, an award-winning chef and businesswoman who was born in 1831 to a slave mother and a white farmer. In the 1870s she opened a pickle and preserve manufacturing company in San Francisco based on her recipes and later produced the first cookbook by a Black woman. The exhibit runs through January 8.
. . .

2. Buy a Book About Kwanzaa
from Cultured Books

Cultured Books is a pop-up children bookstore on 22nd Avenue South in St. Petersburg dedicated to fostering “a love of self by highlighting Black joy narratives and books that represent different cultural backgrounds.”

You can buy one of the shop’s curated books here, including several on Kwanzaa, or you can just donate here and put a book in the hands of a grateful child.
. . .

3. Walk Along the Black Lives Matter Mural
Painted on the Street

Sixteen local artists of various races and ages contributed to creating this work of art painted on the street in front of the Dr. Carter G. Woodson African American Museum of Florida. Each artist filled in a different letter.

The street art has been called a “welcoming mat” to the historic African American community Jordan Park and to the museum at 2240 9th Avenue S, St. Petersburg. T-shirts and prints with images of the street mural are available on the museum’s website.
. . .

This painting was acquired by the Museum of Fine Arts in 2019 for its permanent collection. Wiley, who painted the official presidential portrait of Barack Obama, finished this portrait in 2011 as part of his World Stage series which subverts the traditional language of power by giving everyday people the poses and trappings of royalty, rulers, military leaders and divinities.
. . .

Anderson, who started sculpting at age 69, displayed his portraits in stone and wood of African American men in a solo exhibit last summer at the Dunedin Fine Art Center.

The exhibit and an interview with the artist have been captured on a YouTube video.
. . .

6. Check Out Purvis Young: Redux
at the Tampa Museum of Art

This installation, based on the Overtown neighborhood of Miami, is part of the museum’s permanent collection. It will be offered through June 30, 2024.

7. Immerse Yourself in June Clark’s Iconic Harlem
Quilt Exhibit, Not Seen Anywhere Since 1997 June Clark’s solo exhibition, on display at The Ringling Museum of Art in Sarasota through March 26, is the first time this installation has been offered at a US museum since its unveiling at the Studio Museum in Harlem in 1997.

Clark, a Toronto-based artist, honors her birthplace (her family moved to Canada when she was a young adult) in the exhibit with over 300 pieces of fabric, each with a black-and-white photograph of people, street scenes and historical buildings in Harlem transferred onto its surface.
. . ..

Cheers to the visual, literary and performing art
created by Black artists that you can experience here all year round.