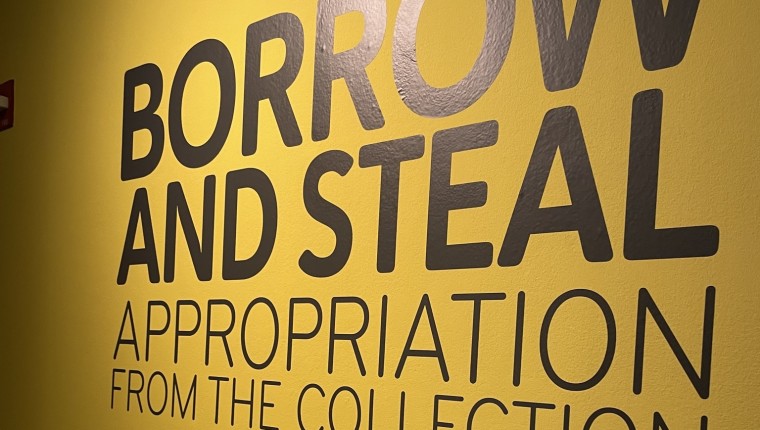 Borrow and Steal –
Is it Okay to Appropriate?

. . .
As a mix media artist, I often question if it’s okay for an artist to use another person’s art. Appropriation is the unsanctioned use of imagery that’s been taken and strategically placed to accent or add a familiar element to a new artwork.

After viewing this MFA exhibit, I decided it was.

So I purposely and yet haphazardly altered someone’s art work and used it in my latest paper work. . . more on that later.

The Museum of Fine Arts multimedia exhibition, Borrow and Steal: Appropriation from the Collection, looks at contemporary appropriation with a focus on feminist takeover in the historically male-dominated art world, and as a way to confront racist histories.

The exhibit shows how appropriation allows an artist to “harness the power of established imagery, drawing attention to important issues,” says MFA Curator of Contemporary Art Katherine Pill. The exhibit highlights some of the museum’s most important contemporary work, selected to exemplify “mass media appropriation in dialogue with art historical references. . .”

Sherrie Levine’s After Degas (1987) anchors Borrow and Steal. The work was featured in the groundbreaking 1977 exhibition, Pictures, at Artists Space in New York City. What was groundbreaking? The introduction of a group of artists who questioned the idea of originality and pioneered the appropriation of mass media imagery with humor and cynicism.

“A painting’s meaning lies not in its origin, but in its destination. The birth of the viewer must be at the cost of the painter.” – Sherrie Levine, 1982

Levine’s copy of the master’s work removes the vivid colors from the Edgar Degas version of Café-Concert at Les Ambassadeurs (1877) and references previous questions of originality and authorship, says Pill. Degas himself created new works by drawing on his own reproductions.

The work by Ellen Gallagher, Abu Simbel, just about knocked my socks off! I’m a science fiction nerd, am familiar with Sun Ra, fascinated by Egyptian mythology and history and I like kitsch. . . so this hit all the buttons.

Gallagher based Abu Simbel on a print that hung in the Vienna office of psychoanalyst Sigmund Freud.

The best way to describe it is on the narrative card – “Depicting the famous temple of Ramses II, the print makes references to Afrofuturism, an artistic, literary and social movement rooted in celebrating and centering cultures of the African diaspora through a blend of history, science-fiction and technology. The spacecraft. . . was inspired by avant-garde jazz musician and mystic Sun Ra’s (1914-1993) film Space is the Place (1974).”

Kara Walker uses paper silhouettes in her exploration of racism, gender, sexuality and history. The simple concept, close up, shows the violence and horrors of slavery and racism. In this Civil War scene, her cutout interacts with the historical documentation.

Whitfield Lovell took vintage photos from the 1863 Emancipation Proclamation up until the Civil Rights Era to create highly detailed portraits of historical, anonymous Black people. He uses charcoal or Conté crayon to create a freehand portrait, usually on wood.

Mildred Howard is an artist, activist and teacher who uses everyday objects to create in her own words “a visual vocabulary shaped by memory, history, family, identity and place.”

She printed directly on maps from ethnographic books on Africa and the Pacific Islands.

His print appears to be an abstract piece. But look close up – tiny images of Martha create shapes through color variations.

. . .
The Guerrilla Girls (active since 1985), an anonymous group of artists, practice intersectional feminism – understanding how women’s race, ethnicity, religion and sexual orientation impact how they experience oppression and discrimination. Their work points out inequities and exclusionary practices in the art world.

Here, they appropriated the image of the Grande Odalisque by French painter Jean-Auguste Dominique Ingres and present statistics and facts about the lack of women artists’ works in museums.

I saw this work, or a version of it, in New York City as a poster in the subway!

Barbara Kruger layers found photos with text that addresses sexism, consumerism and individual autonomy and desire. In 1987 she said, “Pictures and words visually record the collision between our bodies and days and nights which construct and contain them.

“I am trying to interrupt the stunned silences of the image with the uncouth impertinence and uncool embarrassments of language.”

The print was commissioned by Geraldine Ferraro (1935-2011), who became the first female Vice Presidential candidate for a major U.S. political party. Her subject, a woman, stares out at the viewer.

. . .
Roger Shomomura’s American Neighbors (1996) addresses cultural stereotypes. A Japanese American, the two-year-old Shomomura was sent to the Minidoka internment camp in Idaho with his family. This shameful and heartbreaking moment in American history, this wartime experience, influenced Shomomura’s work throughout his career.

He often uses his grandmother’s diary entries, says Pill, as source material and inspiration for his images.

Speaking of Warhol – other very recognizable works in this exhibit are Warhol’s Mao and Gold Barbara, a 9-color screenprint by Deborah Kass in the Warhol style.

Andy Warhol embraced mass media, celebrity and popular culture in his work which included painting, screenprinting, film and sculpture. Kass’s work combines pop and appropriation and is a continuation of her work, The Jewish Jackie Series, which she began in 1992. It is based on Warhol’s Gold Marilyn Monroe (1962).

The bold, Fauvist-influenced strong color palette and painterly style attracted my attention immediately. Working at the height of the Civil Rights Era, Thompson created symbolic characters that appear throughout his work.

It is thought that the bird, as depicted in this painting, represents freedom and flight from fear.

This etching references part of a Spanish proverb – “You, who cannot do it. Carry me on your back.” The laborers or peasants are carrying the weight of the donkeys, the aristocratic class.

. . .
It’s perfectly normal to “watch TV” in a museum; especially when the clips are part of an exhibit. I experienced the guilty pleasure of viewing snippets of Dial M for Murder and two other movies for Christian Marclay’s work, Telephones. I could have stayed longer to watch them!

Marclay has spliced together telephone scenes from 130 Hollywood movies. A popular mode of scene transitions, the use of the telephone also points out our dependence and social customs on communication technology.

Matt Vis and Tony Campbell are their art! The two are Generic Art Solutions in New Orleans and their multi-media, “living sculpture,” performance-based work draws links between the past and the present.

Ms. Red is my second piece of a three-part series envisioned to convey emotions experienced during the COVID-19 pandemic and lockdown. Ms. Blue completed in 2021 represented the sense of well-being, comfort and happiness (there were moments of that). Ms. Red is anger, danger. Ms. Black, to be completed in 2023 will convey death and mourning.

I have a terrible reaction to red ant bites. I cringe when I see a red ant mound. My alteration of M.C. Escher’s Mobius Strip II (1963) for Ms. Red was my interpretation of “angry red ants” to illustrate feelings of anger, danger and discomfort. . . something to flee.

My appropriation and alteration of the red ants was intended to create that same experience of anger, danger and discomfort for the viewer.

I’ve spoken to a few who attended the Creative Pinellas December 15 Arts Annual reception but none seemed to have picked up on that! Maybe upon closer examination they might feel an itch. . .
. . .