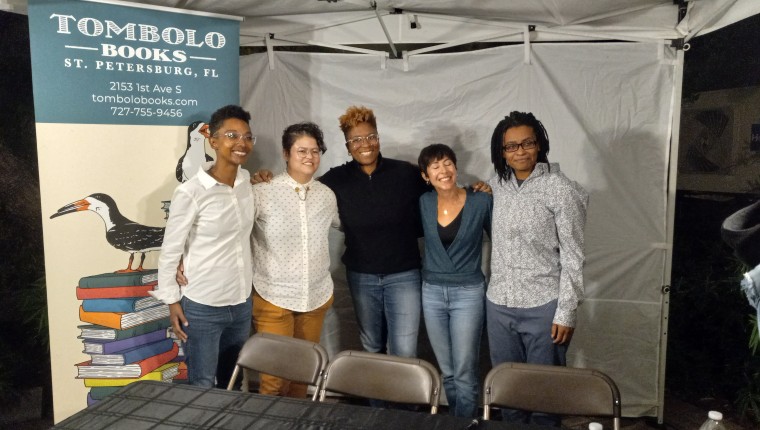 A Panel on Underrepresented Voices in Publishing

. . .
There is nothing better than watching the people you care about sit in front of a large crowd and talk writing.

That’s what I had the privilege of doing on Thursday, November 4. I sat in the courtyard at Tombolo Books in downtown St. Petersburg and watched five of my favorite local authors chat about publishing, writing and representation.

The idea for the panel originated when my dear friend Beth (Elizabeth Engelman) announced the publication of her award-winning book, The Way of the Saints. Beth Engelman and I met at our MFA program at the University of Tampa. After a night out in Key West, we became close friends and supporters of one another.

She told me about her idea for a panel on underrepresented voices. She didn’t know many writers in the area, but she adores Tombolo, as many writers do, so we decided to put together an opening event for the book there.

The panel list came together quickly, as most writers in the area know each other and are there to support one another in any way possible. I met Sheree Greer, author and founder of the the Kitchen Table Literary Arts Center, through the Creative Pinellas Emerging Artist program. She was my mentor and became a friend after the program ended.

Yuly Restrepo and I were in the same cohort for the program and met at the Emerging Artist Exhibition. Silk Jazmyne has been a friend of both me and Beth since the MFA program, and Tenea D. Johnson is on my “I’m fangirling, this writer is fantastic” list. It was overwhelming in the best way possible to see them all together in front of that crowd.
. . .

. . .
Silk acted as moderator and began the night with an easy question about craft and process. She then moved into harder questions like, “How has it been creating new work in political chaos and social upheavals?” and “What’s one way you’ve felt under-considered in publishing? How have you handled this and has this ever caused you to consider quitting?”

I’d be lying if I said I didn’t need an answer to that last question. Writing can be one of the most trying industries. Marginalized communities are overlooked, held to a higher standard – and are sometimes grouped into genres they shouldn’t be for marketing purposes.

It would be easy to get fed up and quit, but as Sheree said, “I’ve never considered quitting. I can’t.”

Writers know what she means. We write because we have to. Because if we don’t, life wouldn’t have the same sparkle. Hearing her steadfastness was exactly what I needed, and what I imagine lots of others needed to hear as well.

The panel members talked about their journeys to where they are now as artists. Silk brought humor to everything, as she usually does, moving the panel along with grace and style. Beth expressed gratitude to those who have lifted her up and helped her get where she is today.

It was helpful to hear Tenea’s experience with publishing. She spoke about not forcing herself into traditional publishing paths. As a Black lesbian, she made a conscious choice to stick to her morals, her voice and her style, regardless of what the industry wants or expects. She spoke of it as “social good” and “social enterprising work” and it is.

Tenea is a role model for so many and has showed writers how to go against rigid publishing rules and how to support themselves and their communities in ways the traditional publishing industry could never.
. . .

. . .
The panel was full of love and support. “I’m writing about the history of my country,” Yuly said at one point, referring to her home country of Colombia. “There may not be a wide audience for that.”

Beth raised her hand. “I would be interested in that.”

One thing all panel members agreed on is that there is always someone who wants to read your stuff, regardless of what we might think. “I’m always writing to that one person who will laugh at the same things I’m laughing about,” Sheree said.

Panel members talked about their experiences trying to locate an agent and how they think publishing could better support diverse voices (hire diverse editors!). The night ended with thunderous applause, yummy appetizers and wine.

I told Sheree after the event, “Every time you talk, I get this golden nugget about writing.” At the RISE panel, every comment and response was filled with helpful guidance, a new way of seeing things – and a reminder to be thankful for all that we have as artists.

It was an inspiring night with good feelings all around, something we all need after the intensity of the last two years. I sat in the audience feeling like I was going to cry – I was so proud of all of them and so thankful to know them.

Thank you to Tombolo Books for hosting and many thanks to Silk, Beth, Sheree, Yuly and Tenea for being incredible panel members, artists and role models for so many young artists.
. . .

You can explore the work of these authors here

Some resources for under-represented writers