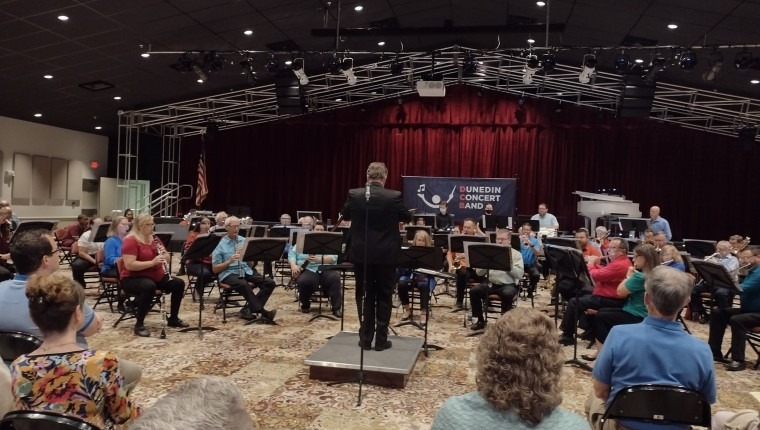 A Homecoming of Musical Ingenuity

. . .
The Dunedin Concert Band, part of the Dunedin Music Society, has performed indoors, outdoors and online since Covid isolations and event cancellations began. With a sigh of relief, they are finally returning home to perform at the Dunedin Community Center on Sunday, October 17 at 3 pm with a pre-concert talk at 2 pm.

“Last year, canceling was a bit of a dagger to our heart. We took one week off in March to determine how we would proceed,” says Maestro Stephen Brown, conductor of the Dunedin Concert Band.
. . .

. . .
There are a multitude of adult concert bands throughout the Tampa Bay area but the difference between those and Dunedin’s is key to this ensemble’s popularity. “The bands were all playing the same thing. We now play more challenging music,” Brown says. “We limit the number of performers in order to maintain a balanced band.

“There are not many community bands that tackle a full symphony — something most usually done by academic groups. This will be the third time we have done that. We’ve done Rachmaninov, Lord of the Rings written by di Mejj – and it’s part of our originality.” The ensemble recently won this year’s Global Music Award Bronze Medal for Creativity and Originality.
. . .

. . .
Traditionally, their schedule is created two years in advance, so as with most live performances, the pandemic caused some necessary changes in the way the Dunedin Concert Band planned. “We had to do everything online for a while,” Brown explains. “We did an online repertoire workshop. We took the folders that we were going to perform from and we met online to talk about them and then we met outside.”

It wasn’t easy, but they adapted. “We couldn’t hear each other,” he says “and we had to buy big massive lights. We had to find the cash for that ourselves.”

They planned their annual Christmas pageant, inviting other groups to join them at Highlander Park. “But it rained on the day of the performance,” Brown says. “We had to cancel.”
. .

Bold integrity.
Quality before quantity.
Doing the scary thing, especially when it is opposite to what is popular.
Momentary, undoctored, natural expression of emotions using music.
Our members, and the people who amaze them.
Contributing to something greater. Bigger. No, even bigger than that.

Brown “explores the deeper elements of how fans of live music – audiences, supporters and performers – connect with each other and make our world a better place for our communities” in the online series “Weekend Preludes”
. . .

. . .
The Dunedin Concert Band’s performance on October 17 includes The Light Cavalry Overture, Awayday, Aaron Copland’s Appalachian Spring and the Don Quixote Symphony. The concert will be “a reflection of Spanish deserts, an Appalachian celebration of life – and a fast car ride with Bond.”

Of composer Robert W. Smith‘s Don Quixote symphony, Brown says “the cultural influences of the African Moors, the Romans and the shift of Castilian territory from Leon in Northwest Spain to La Mancha in the Southeast, contribute to an exciting musical and emotional journey that is centered around a fascinating 400-year old fictional character, who we can actually still see parts of in all of us today.”

A special pre-concert talk will be given by Brown’s wife Melissa, an expert in the writings of Miguel de Cervantes, author of The Ingenious Gentleman Don Quixote of La Mancha and a contemporary of William Shakespeare. She will share insights gleaned from composer Smith that will further bridge the relationship between literary creativity and musical originality.

The band has performed indoors several times recently, and they’re working with churches to schedule holiday celebrations. “We are thrilled to be able to get back on schedule,” Brown says. He does have some advice for those interested in seeing a live performance. “Register in advance to avoid delay and chaos. The more you can take care of up front the better.

“It has all been very interesting. But we are basically back to normal now — we’re back home.”
. . .