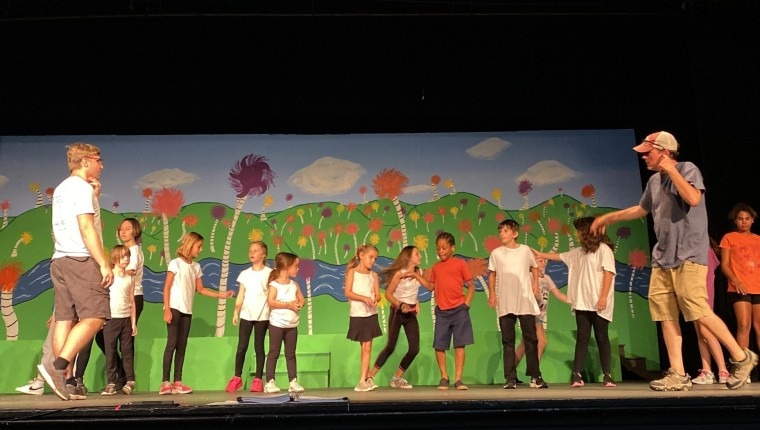 Story and Photos by Gabrielle Reeder
. . .

. . .
St. Pete City Theatre hosts junior summer productions to promote the passion for live theatre and introduce children to the importance of the arts. This summer, the theatre scheduled four productions – Moana Jr., The Wizard of Oz Jr., Seussical the Musical Jr. and The Music Man Jr.

On July 15, the organization graced the stage with a group of talented kids between the ages of seven and 14 for Seussical Jr. Under the musical direction of Dawne Eubanks and the creative direction of Austin Bennett – who both did a fabulous job managing the children – these kids illuminated Dr. Seuss’s work and entertained an audience of over 200.

“There’s been a strong linkage between arts and sciences and reading and the development of a child, especially between that seven to 12-year-old range, and our programs are seven to 14-year-olds. But arts and education have a very strong link as far as success in schools go,” says Danielle Weitlauf, contact person for St. Pete City Theatre and member of the board of directors.
. . .

. . .
The camps are two-week intensive theatre programs, and a child does not need any prior theatre experience to enroll. In fact, during his director’s speech, Bennett noted that most of the kids had never been onstage before.

At the end of the two weeks, the kids perform a two-act show on a Friday night. Tickets cost $10 and that money goes back into funding the Theatre program.

According to Weitlauf, each camp holds between 30 and 32 kids, depending on the selected musical. Registration opens in February, and children and families can find scholarship applications through Creative Pinellas and the St. Pete Arts Alliance.

For each camp, the theatre limits registration slots to allow space for kids who receive scholarships. This way, every child has an equal opportunity to attend the camp.

Also, Weitlauf mentioned the child does not have to live in the area to go to a summer camp.

“We’ve had some [kids] that they’re with their grandparents for a summer, and there’s not a requirement that they have to be local to be in our camp. They just have to be here in the area to be able to attend the camp,” she says.

Some campers attend all camps, but most groups change. Part of this is that each musical this year has a different director, influencing which musical a child wishes to attend.
. . .

Importance of the Arts

. . .
During the summer of 2020, Weitlauf mentioned the theatre limited camp sizes but kept camps open for the kids’ sake.

“The feedback we had from parents and from kids, was that it was crucial for them to be in the camps that summer. There were some of them that were normally signed up for one camp a summer, and once they heard that we were open for all three, they just signed their kids up for all three,” Weitlauf shares. “It just made a difference for them not to be cooped up at home and to have a safe space that they could go to.”

Based on the ensemble’s enthusiasm and passion during their rehearsals and performance for Seussical, attending these camps is necessary.

Besides rehearsals and acting and singing coaching, the camps have implemented additional measures to broaden their outreach within the community.

“It’s been nice for our campers to have an audience, then for us to also introduce younger children to theatre, and help them understand what it means to attend live theatre. [Plus,] the benefit of the audience for the cast members as they rehearse,” Weitlauf says.
. . .

. . .
Weitlauf acknowledges the benefits of bringing other children to watch live theatre, but she also elaborates on the challenges.

“We tell them we want them to applaud and laugh at the appropriate times, or perhaps tell them that it’s not a movie screen. You can’t sit back and critique and talk about whoever’s on stage because they’re going to hear you. So it was also a learning curve for us with that.”
. . .

. . .
The St. Pete City Theatre is a recipient of the Pinellas Recovers Grant,
provided by Creative Pinellas through a grant from the
National Endowment of the Arts American Rescue Plan.