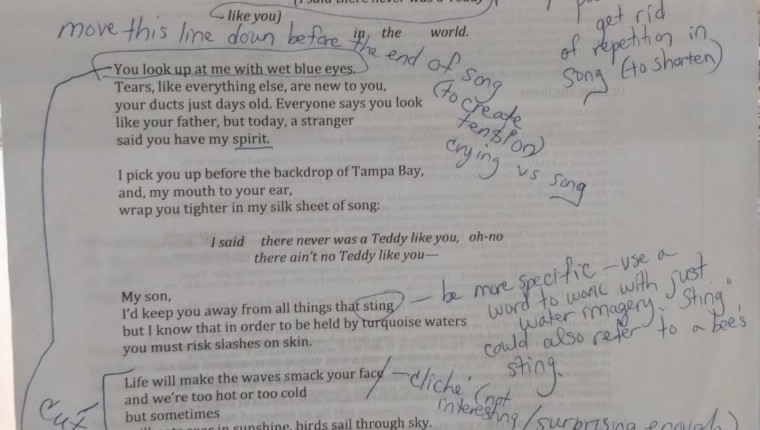 People often think that for writers, the words just flow like the breeze onto paper in a near-perfect way and after a couple of tweaks—Boom, a shining new piece. I often hear young writers get discouraged when a story or poem just isn’t coming together the way they want it to. (There should be a poem about what happens to all the poems that are abandoned because they never developed enough to stand on their own, and so they grow old and shriveled in their silence in a Word document or journal page and never meet the world.) Writing is not easy and good writing takes a lot of drafts, patience, and time. It’s hard to accept when the poem just isn’t coming together in a powerful or magical way. Sometimes it’s just not the right time. Of course, every writer has their own unique process. For me, sometimes when I revise a poem years after the initial drafts, that’s when it finally has its breakthrough moment.

I thought I’d share a poem from the new manuscript I am putting together on motherhood that has gone through multiple workshops and many drafts. It’s one of those poems I’ve been struggling with for a while and because I can be stubborn and I believe it’s close enough to “coming together,” I keep revisiting it and I refuse to put it aside for a season or more. I’ve workshopped this poem at least three times with my friend and poet, Lake Angela, and I’ve also had it critiqued by my writing group from Buffalo called Lit Garden and from Gianna Russo, my mentor I’ve been paired with thanks to Creative Pinellas.  Here’s an old draft with some suggestions from those wonderful critiquers/ generous feedback givers. 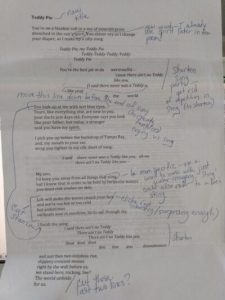 And below is my most recent draft (that is likely to change, at least a little.) So please, if you’re a writer wrestling with words, don’t worry. Every creative piece has it’s own life and story and often, we need to wrestle a little (or a lot) to get to the magic, the “That’s it!” moment where it feels right.

Happy writing (and wrestling) with words,

drenched in the sun’s grace. You shiver-cry as I change

your diaper, so I make up a silly song:

Everyone says you look

said you have my spirit.

I pick you up before the backdrop of Tampa Bay,

and, my mouth a conch shell to your ear,

wrap you tighter in my silk sheet of song:

‘cause there ain’t no Teddy

I’d keep you away from the glass edges of sea

but I know that to be held by turquoise waters

you must risk stings and slashes.

You look up at me with wet blue eyes.

I finish the song:

I said there never was a Teddy like you

and just then two dolphins rise,

right by the wall before us;