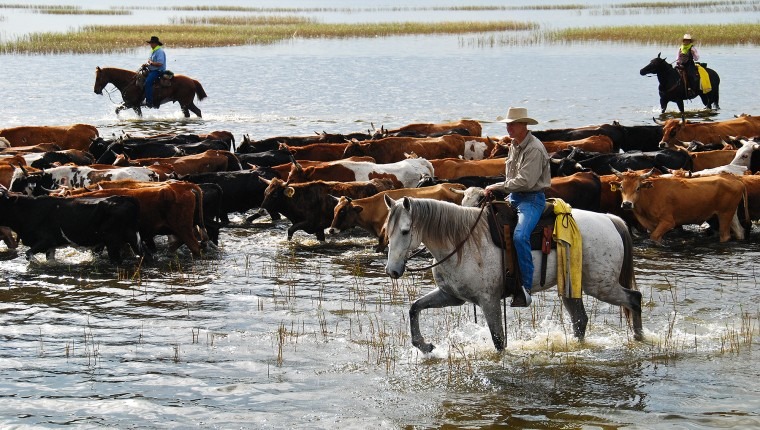 . . .
Remember the Wild West when cowboys fought Indians, shooting from the hip and executing fatal shots from 40 yards away?

Fake history, historians tell us now.  The Westerns films and TV series throughout the ‘50s and ‘60s that depicted those scenes were based on sensational 19th-century dime store novels, written by people who never set foot in the West.  Not only are those shoot outs physically impossible at such a distance, all those fights between cowboys and Native Americans are myths as well.

Between 1866 and 1886 when 20 million cattle were driven north by cowboys on horseback, Native American already had been forced into reservations by the U.S. cavalry. When cowboys wielded revolvers, they were using them against wild animals attacking the cattle they were entrusted to protect, not against people. Cowboys weren’t even exclusively a product of the West.

Cowboys and the cattle industry began in Florida.
. . .

. . .
“In reality, the first cowboys were vaqueros who spoke Spanish and tended cattle outside St. Augustine after its founding in 1565,” writes journalist and author Craig Pittman in an article in Flamingo Magazine – Cattle Country: Keeping up with the Cowboys in Florida. “As the Spanish spread through North Florida, they brought their cattle, establishing ranches and training the local Native Americans to tend the herds, too.”

Five hundred years later the Seminoles are still working as cowboys. They prefer to work on cattle ranches rather than in casinos because cattle link them more to their ancestors, says Pittman.

And, yes, they’ve heard the jokes about Indians playing cowboy, but, as Alex Johns, the natural resource director for the Seminole Tribe, points out, “they’re not newcomers to the field.”
. . .

. . .
Johns’ family ranching history, in fact, dates back to the 16th century when his American Indian ancestors “poached their first cow from the Spanish” – so-called cracker cattle who were descendants of the seven Andalusian cattle first brought from Spain to Florida by Ponce de Leon in 1521.

Until 1957, says Johns, “we were nomadic, free grazing our cattle across Florida.”  Now Johns has inherited the First American Ranch, his family ranch. He also manages a ranch for the Seminole Tribe.

Pittman often points to another irony of the Florida cattle industry – cattle ranchers may be environmental activists’ last great hope to save Florida’s remaining green spaces.

In his Flamingo article Pittman quotes Julie Morris, an official at the National Wildlife Refuge Association. “‘When you look at these ranchlands from an ecological perspective, it’s such an eye-opener. That’s why the recently passed law creating the Florida Wildlife Corridor is so important for the future preservation of this type of land.

“Anyone who wants to hang onto habitat for everything from gopher tortoises to panthers knows ‘we’ve got to keep these ranch lands intact somehow. They’re keeping Florida green.’”
. . .

. . .
Born in Pensacola, Pittman has been writing with humor and insight about all things Florida for 30 years. In reviewing Pittman’s 2016 book Oh, Florida! How America’s Weirdest State Influences the Rest of the Country, the New York Times called Pittman “a walking museum, the type of wry newshound whose marrow-deep knowledge of place used to be indispensable to America’s major dailies.” On his website Pittman notes that he “has covered a variety of newspaper beats and quite a few natural disasters, including hurricanes, wildfires and the Florida Legislature.” Currently he is the co-host of the Welcome to Florida podcast.

Pittman is especially eloquent when writing and talking about Florida’s fragile ecology. During his years as an environmental journalist at the St. Petersburg Times (now the Tampa Bay Times), he won the Waldo Proffitt Award for Distinguished Environmental Journalism in Florida four times, and the top investigative reporting award from the Society of Environmental Journalists twice. His first book, co-written with fellow Times investigative reporter Matthew Waite, addressed Florida’s vanishing wetlands. In 2020 Pittman was dubbed a Florida Literary Legend by the Florida Heritage Book Festival.

All of his books — he’s written six — have been about the state’s wildlife in one form or another, from panthers (Cat Tale), orchids (The Scent of Scandal), and manatees (Manatee Insanity) to Florida’s cowboys. In “Dying Every Night at the Rodeo,” one of the essays in his latest book, The State You’re In: Florida Men, Florida Women and Other Wildlife, he talks about another form of wildlife – the Florida cowboy in post-Civil War Florida described by 19th century visual artist and writer Frederic Remington as “wild-looking individuals, whose hanging hair and drooping hats and generally bedraggled appearance would remind you at once of Spanish moss.”

. . .
At a recent talk at the James Museum of Western and Wildlife Art in St. Petersburg entitled Five Hundred Years of Cattle Ranching in Florida, Pittman returned again to the link between cattle ranching and keeping Florida green, pointing out how valuable the state’s ranchlands were in keeping the state’s natural habitats intact — prairies, maiden cane marshes, live oak hammocks, cabbage islands and longleaf pine savannas that attract the state’s wildlife, some of it rare or endangered.

Honoring the state’s cowboy tradition may be the best way to save the Florida’s natural environment, he told the crowd which included at least one person sporting a Stetson.

The owners of the Blackbeard’s Ranch near Myakka, for example, take their stewardship of the land very seriously, posting this on their website – “As caretakers of the land we have both the privilege and the obligation to protect the habitat and wildlife on our ranchlands. We manage the ranch to ensure high-quality habitat for wildlife while a running a productive cattle operation.”

Florida Cattle Ranchers, a consortium of ranchlands founded in 2015 which includes Johns’ First American Ranch (he is a founding member), is also dedicated to a Sustainable Florida.  “Our ranchers are natural environmentalists continually working to improve ways to raise our cattle responsibly, even without regulations,” they boast on their website. “They desire to protect our land and natural resources, and to ensure the sustainability of Florida and the longevity of our industry.”
. . .

. . .
In his museum talk, Pittman, with his characteristic wit, regaled the audience with the history of Florida cowboys then and now – the hard-drinking Napoleon Bonaparte “Bone” Mizelle, “who couldn’t write his own name but was renowned for his ability to recall every brand of every rancher in the region around Arcadia,” ranch owner (and former Hillsborough County sheriff) Capt. John Parker “who died from drinking poisoned liquor at a revival meeting” and Jim Strickland, the current managing partner of Blackbeard Ranch, who once organized a cattle drive through downtown Tampa to promote Florida Cowboys: Keepers of the Last Frontier, a photography book by Carlton Ward Jr.

That drive, says Pittman, “went terribly wrong”  when the dogs the ranchers had brought along “to lend some historical authenticity got into a fight in the street, causing the cattle to stampede and bolt past their destination.” Strickland called it “the world’s fastest cattle drive.”

These days cowboys no longer drive their cattle hundreds of miles to market. They use smart phones and the internet. But the spirit of the cowboy remains.

In his book, Ward Jr., an eighth-generation Floridian from a pioneering ranching family, documents the vanishing life of the Florida cowboy and their ranches, where bears, panthers and other endangered species can survive and where irreplaceable wetlands that help sustain the state’s diminishing water resources are protected. The book is accompanied by 10 essays, including ones from Dana Ste. Claire (author of The Cracker Culture in Florida History), Joe Akerman (author of the 1976 Florida Cowman: a History of Florida Cattle Raising), Audubon Florida and the Seminole Tribe.

“Without its lush ranchlands, there would be precious little left to see of old Florida, and nowhere for some of our most endangered wildlife to survive,” says author Carl Hiaasen. “Carlton Ward’s colorful tribute to this dwindling frontier is also a call to save what remains of it. The alternative is unthinkable.”
. . .

. . .
Once these ranchlands are paved over, Pittman points out, little will be left to remind us of what once was there. When Al Boyd sold off thousands of acres of northern Pinellas County ranchland, only the 17-foot concrete boot that marked the boundary of his Boot Ranch property remained. Now that land is covered in subdivisions and strip malls.

And the big boot? Chalk up one more irony. The boot, reports Pittman, stands in the parking lot of The Shoppes of Boot Ranch in Palm Harbor.
. . .