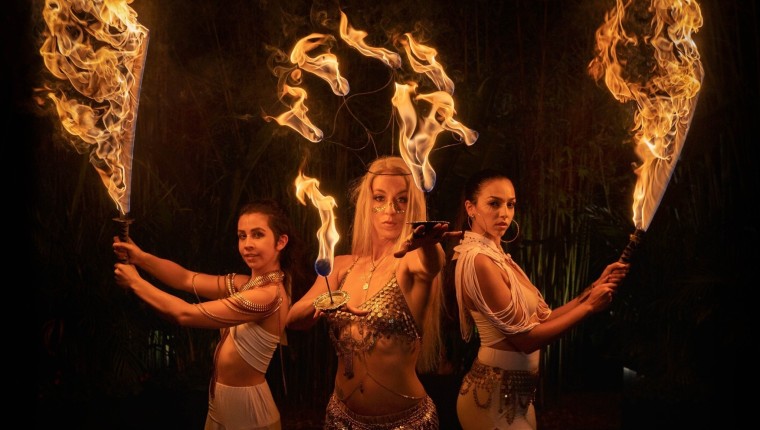 Welcome to the Jungle

. . .
Thick, luscious, forest surrounded Gabriela Rosa. Trekking through Colombia’s Tayrona National Park on horseback, she descended from mountaintops through a jungle cackling and alive with monkeys. On the beach below, Rosa snorkeled through coral reefs.

On a different trip to Cuba, she stood in awe of Hanabanilla’s untouched treasures — her eyes drinking in jungle landscapes overflowing with waterfalls and lakes.

“It was the most pristine and untouched nature I had ever seen,” describes Rosa, creative director and founder of the St. Pete-based circus troupe, Underground Cirque. “I went with my [Cuban] grandparents. They’ve been living in the U.S. for 65 years and would take my dad and uncle to [Hanabanilla] as kids. There’s a lot of beautiful places in Latin America, but this was the most raw nature I’d ever seen.”

Inspired by her travels, Rosa returned to St. Pete with a vision. As a frequent fire dancer and performer on cyr wheel — an acrobatic apparatus — she felt ready to stage her first original show Selva, which translates to jungle in Spanish. “Selva: a journey through the jungle,” will premiere at NOVA 535 on January 26.
. . . . . .
In the past few years, Rosa saw a lot of potential in her fellow performers while they worked together on the local entertainment circuit. She began Underground Cirque in 2019 to provide a platform for circus artists to have more creative freedom in developing new and exciting acts.

“We do a lot of events where we have limitations and sometimes we can’t do certain acts because of the space or venue rules, which I found to be creatively limiting,” explains Rosa. “The idea behind doing a ticketed show is making this available to the public and giving creative freedom to all the artists, so we can have aerial, fire, cyr wheel and contortion – and have the best of everything we can give to them to do their job the best.”
. . . . . .
Rosa got involved in fire dancing during her sophomore year of college while studying computer science. Once she graduated, Rosa got a job in her field but soon quit to pursue performing full-time. She’s spent six years perfecting her craft and admits that while she does get burned from time to time, she feels fulfilled to be a part of an art form that prioritizes generational knowledge and community.

“We’ll find mentors who have been doing it for years to teach us things,” says Rosa. “A lot of fuel science goes into it as well. We have to think of what kind of fuels we’re going to use when we’re indoors to not set off smoke alarms because different fuels give off different amounts of carbon.”

Rosa attends Flow Arts festivals to learn new skills ranging from fire breathing and eating, to wielding different types of fire staffs. All the tricks of the trade are passed down from mentor to apprentice, and as Rosa expands her repertoire as a fire dancer, she is also honing her skills as a director and choreographer.
. . . . . .
In preparing for Selva, Rosa says she began by gathering all the artists together and brainstorming how their apparatuses and skills might fit together like a patchwork quilt. She hired choreographers to help with the dancing sequences – first done without fire – then practiced with that added element to see the practicality of some poses and tricks.

“When you think of the Ringling Brothers and other old-school big top circuses, there’s daredevils and this and that, but nothing pulling the storyline together,” remarks Rosa, who wanted there to be continuity in the jungle storyline. “The fun part was laying out this broad, overarching theme and thinking with the other artists how an act could fit into that and what kind of stories we can tell.”

An emcee will guide the audience through each act, providing context for how this jungle of limbs, fire and intrigue lives and breathes. One opening act features Rosa alongside two other fire dancers. They represent tropical birds and move to a techno-Latin tune pulled directly from Rosa’s own frequently listened-to playlist. Humans transform into creatures — a lunar moth on cyr wheel represents rebirth, while a man turned tiger escapes from aerial chains.
. . . . . .
Another act showcases an aerialist turned jaguar as she suspends herself, twisting and turning, on an aerial pole. She’s followed by a poacher, a contortionist who specializes in foot archery. Carefully gripping the bow and arrow between her toes, legs akimbo, she releases the flaming deadly shot that reveals one of the major undercurrents in Selva.

Rosa says this particular show is still very much a work in progress and wants to continue developing the story beyond its January premiere date for future iterations. Beyond speaking to the destructive forces of fire, deforestation and human impact on these natural wonders, Rosa hopes to give impressions of hope and light within this one-of-a-kind theatrical performance.
. . .

. . .
“I think nowadays there’s a lot of ‘othering’ of people, and I want people to understand that people from different cultures are still just human beings,” says Rosa.

“I hope to inspire people to want to learn more about Latin culture and visit one of these places. It’s indescribable and when you’re interested in exploring and going to these places, you tend to care about them more and you don’t want them to go away.

“It deepens our connection to each other, which I think is healing for the world, especially now.”