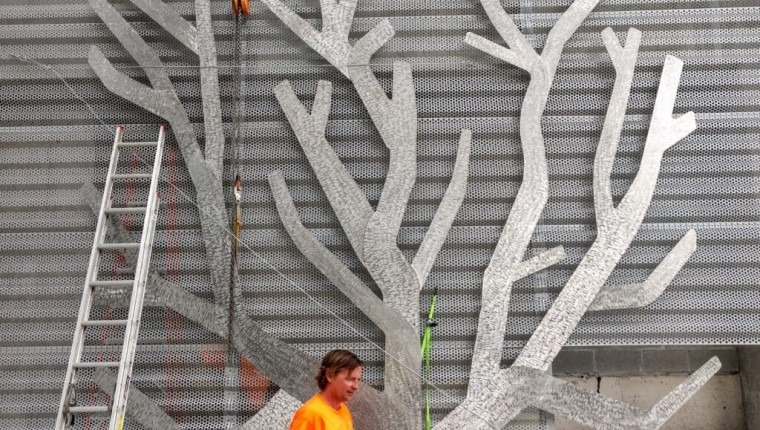 We Are All Connected

The design process progressed from a rough sketch on paper, to a Photoshop illustration, to a CAD file. It was ultimately water jet cut from 9 sheets of aluminum,  each 4 feet wide by 12 ft long, weighing over 1500 lbs. in total.

The sculpture represents the interconnectedness of living things. The roots spread deep into the Earth, thereby nourishing the branches reaching into the sky. Tree of Life is attached to an outside wall of Publix Greenwise Market and needed a bracket attachment system. To accomplish this I designed 5 inch long U-shaped aluminum brackets that were welded on the back of the limbs and roots. 25 brackets for the tree and 25 to support the roots.

The tree is suspended 5 inches from the wall to create interesting shadows throughout the day as the sun moves across the sky.

During the production phase, clearing out a space large enough so the whole sculpture could be laid out on the floor of the studio was a challenge.

Once all the branches were in place, I started using a TIG  welder to join the pieces together. It was rather slow and tedious and I decided to try a spool gun on my MIG welder for the first time, and it worked like a charm. The spool gun made the welding go much faster – there was a lot of welding to be done.

The sculpture was designed so all the welds were on the back, and on the front we see a series of clean overlapping branches that define the tree and roots beautifully with subtle depth.

The surface was textured with a bark-like pattern using a flap disc on an angle grinder. The effect was tedious to apply as it had to be done by hand while working awkwardly on the floor.

The final step was getting it loaded up, transporting it to the site and getting it installed. I built an “A” frame wood cradle to hold the 9 pieces of the sculpture on the trailer. Arriving in Fort Lauderdale, the crew unloaded the pieces, staged them on the sidewalk and began the installation process that took 2 days to complete.