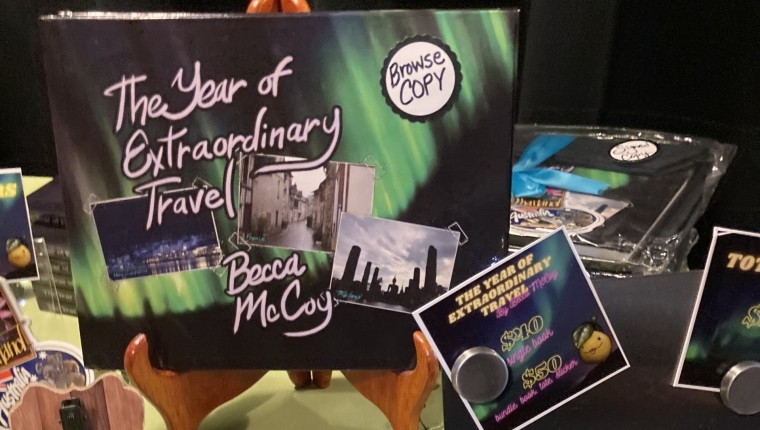 Story and Photos by Margo Hammond
. . .

From Page to Stage

But as every traveler knows, the best part of any trip is the unexpected.

The seeds of The Year of Extraordinary Travel, now a 138-page book published by St. Petersburg Press, and a page-to-stage performance offered at Studio Grand Central through December 18, began back in September 2018. McCoy recently had turned the big 4-0. She was also emerging from a divorce after a 15-year marriage.

Why not take a trip? she thought. Get out of my head and live in the moment? Then she took another trip. Then another. When she realized she had been traveling somewhere different every month, McCoy decided to make a year of extraordinary travel her goal – to deliberately head out each month to a new destination. It was her own version of Eat, Pray, Love, Elizabeth Gilbert’s memoir of traveling as therapy, but without the angst. By August 2019, McCoy had toured eight U.S. states and seven other countries with five different travel companions — her mother, sister, pre-teen daughter, a new boyfriend and a best friend — but often alone.

Then the pandemic hit.

Grounded, she and that new boyfriend, illustrator Justin Groom, moved into Groom’s grandmother’s house on Leafmore Drive in Smyrna, Georgia, the house he first came to as a newborn. There they launched a gallery, selling Groom’s paintings and illustrations, McCoy’s photographs and some joint works that combined both.

They exhibited their works in 25 other galleries and juried art shows. They won awards, were selected for four public art initiatives, illustrated book covers and created a client base.

McCoy, however, was restless. She had been an actor since 1999 but now theater was in flux. She had no outlet for her signature cabaret performances, which depend on collaboration. Groom, looking at the 10,000 plus photographs from her exotic trips, said, “No wonder you’re bored.”

That’s when she got the idea of writing down stories from her year of travel, a project she could accomplish solo. Each month would be its own vignette. Not a sentimental diary but just good storytelling. She would turn it into a book with a beginning, middle and end.

Groom designed the cover, of course. And St. Petersburg Press was the natural choice to publish it. McCoy’s ties to this area run deep. Originally from St. Petersburg, she is an alum of Eckerd College and for years was a familiar face on this area’s stages. And when Ward Smith, the co-founder with his sister Karen, of the Studio Grand Central at 2260 1st Avenue S invited her to come down from Atlanta to present a show of original material, she knew exactly what that original material would be – The Year of Extraordinary Travel.

Collaborating with director Vickie Daignault (they had met in Chicago back in 2004 and both had lived in Gulfport), they worked to transfer those stories from page to stage.

Both knew that the play couldn’t be just a straightforward reading onstage. It needed to be a hybrid that would be set in the spaces between “no longer” and “not yet.” It needed to be a multi-media show that would honor the many ways we tell and hear stories – bedtime stories read to us when we are young, audiobooks where we imagine the scenes in our own heads, photography where the story is framed for us, theater shows where we see stories acted out.

It needed to explore the difference between recollection, which is a chronicle of facts, and memory, which changes as we change.

The result is a fusion theatrical experience that combines a book reading, a slide show and a solo performance.

The stage setting is simple – a couch covered with a sheet and a ghost light, the single bulb kept on in theaters for safety when all the other lights are turned off and the workers have gone home.

McCoy arrives onstage with her book in hand. Pulling the sheet off the couch, like she is returning home after a long trip away (she has, after all, not been on a stage here in three years), she addresses us directly. She curls up on the couch. She reads to us from her book. We hear a voiceover setting up each trip, but even that is not static. At one point she interacts with the voiceover, telling her “I’ve got this.” We see slides of her trips.

In 60 minutes McCoy relives the entire 12 months of her extraordinary year of travel and we are invited on the journey. The thousands of miles traveled. The modes of transportation she takes to get there (including a tuktuk in Thailand). The scores of places where she slept (including a French chateau owned by her friend). The drunken spree in New York City where she ends up on a Very Famous Person’s couch (the name is not revealed in the book, but from the stage she whispers it to us, her confidantes).

The solo trip to Chicago where she lived as a married woman but now gets to experience on her own. The solo trip to Key West where she meets up with a ghost. Her trip to the Borealis Basecamp in Alaska to see the Northern Lights. And, in the final month of her extraordinary travel year, an eco-visit to the Elephant Jungle Sanctuary in Chiang Mai, Thailand. All of it celebrating, as the publisher blurb reads, “the relationship-deepening, horizon-expanding, joy-inducing nature of travel, and the beauty of our diverse earth and common humanity.”

And the messiness and wonder of the one thing that never changes – life happens while we’re making other plans.
. . .