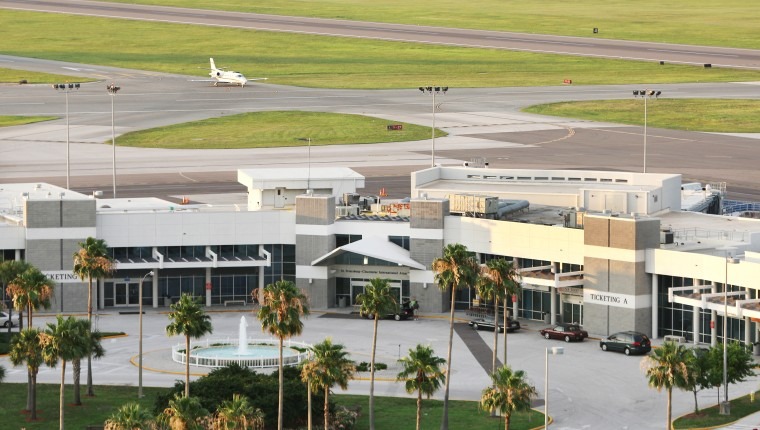 Visual Art Welcomes You at the
St Pete-Clearwater Airport

. . .
The exhibition of artworks at the St Pete-Clearwater International Airport (PIE) is similar to how European public spaces showcase local masterpieces. The hallways, security check, baggage claim areas and the terminals all have museum-quality exhibitions on view.

Northerners seeking refuge from the gray of winter get a glimpse of the Arts Coast as they arrive, and will soon be greeted by the natural beauty of Florida with the addition of two new murals. While walking through PIE, a permanent collection of paintings, drawings, glassware, sculptures and photography are on view at all points along the journey, almost all by Florida artists. From the moment you walk inside the airport until the time you get on a plane, you’re surrounded by museum-quality artwork in gilded frames and plexiglass vitrines.

The curbside walkway feels like the streets of Rome in that artworks envelope you as you travel through the space.

The main foyer has a multi-panel, glass mural created by Kentucky-based Guy Kemper titled, SunSkySea, that welcomes travelers with an abstract view of the water. It’s a mostly blue mural with splashes of white and yellow that give it energy and implied motion. Presented floor-to-ceiling, travelers are made to feel like they’re immersed in water, swimming like a dolphin or a manatee as they walk.

Michele Routh, Public Relations Director at PIE, says, “As part of revitalization in 2010, this public art mural was commissioned by the Pinellas County Arts Council. It interprets the sun, sky and sea in blown and painted glass.”

As an out-going flier, you’ll go through security while viewing the verso of Kemper’s mural. Routh says, “It’s a very pleasant way to go through TSA – which, by the way, at PIE, takes less than five minutes on average.” The stained-glass mural is backlit, like a rose window, by the Florida sun.

These scenes give travelers some lasting reminders of Florida’s natural beauty, and entice them to return next winter.

In between the ceramic murals are small, three-dimensional works presented in plexiglass vitrines like museum artifacts. One such work is a glass vase by St. Pete’s Duncan McClellan, whose style consists of etched glassworks that tell a story. The figures and objects depicted in McClellan’s glassworks are silhouetted as if to mimic ancient Greek pottery.

With such an overwhelming glass-art scene here in Pinellas County, McClellan’s work is representative of our local flavor.

Beyond security, the terminals offer travelers an experience that’s akin to the quieter, dimmer rooms of New York’s Metropolitan Museum of Art or Museum of Natural History. Framed paintings and drawings are hung above rows of comfortable chairs in areas that are dimly lit and have a very quiet atmosphere.

It’s a great experience for viewing art, and harkens to museum-going. You feel less like someone in transition than someone who’s home.

The latest additions to PIE’s permanent collection of artworks include two new murals by St. Pete artists, Leo Gomez and Laura Spencer. These murals have been commissioned by Creative Pinellas in cooperation with PIE. The collaboration has resulted in an experience that brings the backstreet walls of downtown St. Pete and the sun rays of Clearwater Beach to vacationers looking to enjoy Pinellas County.

Gomez’s mural has a color palette of the orangey pinks and turquoise blues of a beach sunset. It reads ‘GO EASY.’ “I specialize in typographic murals with uplifting messages and vibrant color palettes,” says Gomez. “I wanted to paint the one thing that everyone loves about Florida.”

The mural greets travelers as they deplane on to the tarmac, which faces westward. “The title of my mural is Golden Hour,” Gomez explains as he points to the wall he’s working on.

As you enter the terminal from the tarmac, a mural with larger-than-life-sized botanicals, and gigantic bees and butterflies, by Laura Spencer aka Miss Crit, guides you along a slim hallway. The scale of the mural’s depictions make you feel as if you’ve been shrunken to the size of an insect.

“It’s of native pollinators and flowers. A lot of my public art celebrates Florida and conservation — I’m a native to St. Pete. Born and raised,” says Spencer. “Locally, many pollinators like butterflies and bees are in peril because so many native wildflowers have been lost,” she explains.

As part of her creative process, Spencer creates a textual under-drawing of random words and symbols that serves as a measuring tool for the image’s proportions. “The text is a process of getting my mural onto the wall, known as a doodle grid, that ensures my proportions are accurate,” she says. “I write all kinds of chicken scratch on the wall. It can be anything – letters, numbers, shapes — as long as I create a uniform, unique pattern all around the wall.”

Spencer pulls out her phone to show a digital mockup of her mural. “And then I take a photo of that doodle grid, and in Photoshop, I’ll take an overlay of the mural and place it on top of that doodle grid. This way I have frame of reference.”

Photographer Beth Reynolds produced
a video tour of the visual art at PIE last year
with rotating exhibits by the Morean
. . .
Whether you’re returning home up north or returning home here to Pinellas County, when you pass through PIE, artwork will guide your way. Experience the talents of muralists, glass artists and many more as you travel to and from paradise.